After the National Reform was declared finished in April 2013, another discussion were made inside the National Forum that Indokistan should changes its forms of government. Those calls were made because that existing divisions continuously requested for more autonomy, remembering that Indokistan was composed by former sovereign micronations merging themselves to the country, which resulting on a striking characteristics and differences between each divisions.

National Forum was divided on the proposals, on which the Federalists, led by Nabil Ihsan, argued that if Indokistan turns federal, it will ensure permanent autonomy between the diverse divisions. The Unitarists, led by Tian Abdurrahman argued that a federation will weakened the country, and as an Indonesian nationalist, he also opposed a federation because it was not an "Indonesian character." A third option, a devolution, later was proposed by Tian himself as a compromise on the federal-unitary issue. It was also agreed to take the issue to a nationwide referendum, where Indokistani citizens could express their preferences.

Several discourses on proposing the new official name of Indokistan also appeared. A new name "People's Republic of Indokistan" (Indonesian: Republik Rakyat Indokistan) was promoted by Farhan Abdurrahman and Nabil Ihsan, mainly to promote the Socialist character of Indokistan that both of them support. This proposal was also taken seriously by the Forum and was agreed to became the third question on the referendum. Shortly before the plebiscite date, Rayhan Haikal publicly announced his preference on the new official name of Indokistan, on which he argued that the country should be named "Democratic Republic of Indokistan" (Indonesian: Republik Demokratik Indokistan). Despite the option he preferred does not exist on the ballot paper, he committed to vote on his proposal.

In final, there were 3 questions asked on the referendum, those were:

Results of the plebiscite were announced on 19 May 2013 in front of the National Forum members. The voter turnout was 100%. A simple majority, disregarding the abstain voters, was sufficient for the result. All three proposals were approved by the voters. 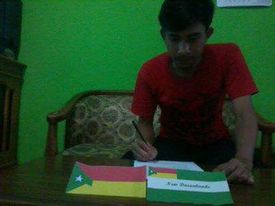 Provisional Authority accepted the results of the referendum and decided to immediately took the most-voted options as government acts. With most citizens voted for a federation, it legitimises the transition to a federal Indokistan and ends any other campaigns for other forms of government previously took place. Tian Abdurrahman as the most avid Unitarist, concedes defeat and committed to accept Indokistan as a federation.

With citizens agreed to replace the constitution, it legitimises authority decision to invalidate the old constitution while at the same time also approves the process to compose a new constitution for the new federation.

Federal State of Indokistan as a new federated Indokistan legitimises by popular decision, was established on 5 July 2013 after being proclaimed by President Tian Abdurrahman after his inauguration. It was agreed beforehand that all of those referendum results would be enacted by the new president after an election. The process to replace the constitution was delayed and only started in October 2013 inside the National Forum. Under the title of "Agreement Between States", it was ratified and started to be used in January 2014.