Throughout its history, Indokistani political parties never had any significant influence over Indokistani politics, mainly because of stronger personal figures identity that shapes public support rather than party preferences that plays no role.

Indokistan enters its first single-party era when a Communist coup d'etat in December 2010 resulting on the establishment of the Socialist Republic of Indokistan. The new Communist government outlaw any other parties and declared the Communist Party the only legal party in Indokistan. The situation was short-lived as the government later collapsed under public pressure during the January Revolution in 2011.

All political parties during this period participating on the Indokistani only parliamentary election in March 2011 to form the Farhangrad Parliament, resulting on plurality for the National Party. Later protests by citizens, accusing government bias against Islamic Party, resulting on the cancellation of the results. The Parliament later composed by equal number of seats allocated for all parties, while the National Party successfully maintained its plurality because of the Nationalist Prime Minister's uncontested seat. 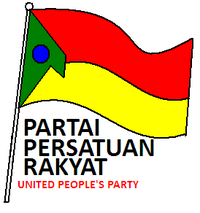 United Peoples Party, the only party of Indokistan from June 2011 until June 2012

This situation was heavily critisized by president Farhan Abdurrahman, accusing grand coalition causing the parliament checks to be ineffective, and Islamic Party which only had one member as discriminative against religious community. He later addressed the parliament and urged all political parties to merge, which he wishes could end the issue. With all party leaders supported Farhan's stance, an agreement to unite all political party inside Indokistan was signed in 6 June 2011, thus forming the United Peoples Party, and causing Indokistan to adhere on single-party politics.

This situation was critisized by Los Bay Petrosian Nasakom Party member Indrawan Prasetyo in 8 June, on which he said that this system was in contrary to democracy, and showing that Indokistan enters a period of dictatorship. Indra even wrote that he ready to send an ultimatum against Indokistani government to end the single-party policy. His criticism later was countered by prime minister Nabil Ihsan, on which he said that this policy symbolizing Indokistani citizens unity to fulfill their political goal, and to end discrimination against religious community that was represented inside the parliament by the Islamic Party.

In June 2012, Dacoen Barakstani leader Tian Abdurrahman filed a registration ticket for his new political party, Islamic Development Party. Tian with his fellow Barakstani Susi Sopiani became the first members of the party. The new party immediately approved, and marked the end of single-party Indokistan and hegemony of United Peoples Party inside Indokistani government. Despite of that, Islamic Development Party never had parliamentary seats before its disbandment in August 2012 during the Emergency Government authority.

Immediately after their registration was approved by Federal authority, these parties immediately planned a "National Consensus" in November 2012, despite continuous delay. It was a convention of all parts of Indokistani federal government to consolidate Indokistani Federal Republic, political parties were expected to influence the outcome of the consensus. These parties were also expected to participate on the proposed general election that was scheduled to be held in January 2013.

After the collapse of the Third Republic, Indokistani authority sees the moment as the right time to establish major changes inside Indokistan, which was responded by immediately set a new provisional government in order to establish reforms, particularly inside the country political system.