The Indokistan Technology Development Center (Indonesian: Pusat Pengembangan Teknologi Indokistan, acronym ITDC) was an Indokistani state-owned institution established in February 2011 by Ali Akbar and Nabil Ihsan. ITDC had two activity centres located in Cussex and Suwarnakarta, and was formed to become an institution that manages technological experiment inside Indokistan.

The institution was last led by Dicky L. K. until 2013, when the position was left vacant, and was disbanded after inactivity in April 2016, as Indokistani government attempted to simplify its state-owned institutions.

A successful water rocket project uncer codename "Lomonosova Project" led by Nabil Ihsan and discovery of a new kind of stones called "Jumstone" by Ali Akbar triggering them to promote for an establishment of a scientific research institution, because they realise that such institution was necessary for their experiment development. The Parliament was in favour of establishing ITDC, and together with it also to establish the Indokistani Aerospace Company (IKAC). Because of lacking of development and product, IKAC was forced to be merged with ITDC in June 2011.

2011 was the Golden Era of ITDC, with majority of its entire research and experimental programs were conducted on that year. Besides Project Lomonosova and Jumstone research, ITDC also conducts the Project Environment to gather useful garbage to be used as coins. In October 2011, ITDC successfully conducts the "EM Project", which became the most famous and successful program, and was immediately set as the flagship project which increasing its prestige among micronational community.

During the Emergency Government of Indokistan and its successing authority, ITDC was left inactive and was abandoned, yet because of its successful projects were later maintained by Indokistani authority. After its decline, ITDC was attempted to revitalise by establishing new projects in the end of 2012, yet with no success. After that, ITDC was left inactive, yet was survived because of its historical importance.

On 13 April 2016, National Forum officially disbanded ITDC, with inactivity blamed as the cause of it. The disbandment of ITDC was initially opposed by several members because of historical reason, but they later change their stance to agree on the disbandment. After te disbandment, all assets that was left from ITDC was now owned by the central government (later Suwarnakarta Institute), with several of it was transferred to the National Archives of Indokistan. 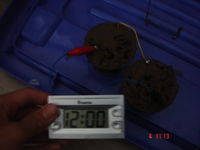 Digital clock activated by cups of mud, during EM project

Since its establishment, ITDC had several successful programs that mainly took place in 2011 and 2012: