Symbols of Indokistan refers to objects that functioned to representing Indokistan inside and outside the nation. It represent the personality of Indokistan, its peoples, and its culture. It also reflect its cultural aspects and its history. Symbols recognized by the constitution are the flag, emblem, and national anthem, with another articles described the official language and capital.

The current national flag of Indokistan is used for the first time in January 2011, after the January Revolution toppled the authoritarian government. It is bicolor of red and yellow with green triangular object on the hoist of the flag, it has a white star inside a blue circle. There are few proposals to change the flag, but all that proposals were failed to be accepted by the government, and the current flag still holds its official status. Approved co-official version of the flag, which is without the white star and blue circle is widely used by citizens currently.

The color red symbolizing the spirit and blood shed during the revolution and yellow symbolize prosperity that the peoples will struggle and work to reach that. The triangular object with a bending on the tip may resemble the national animal, duck that symbolizing national nature. It has a white star symbolizing purity and blue circle zymbolizing water. 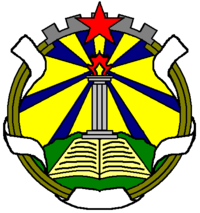 The new national coat of arms are gained its official status on 7 January 2014 and features an opened book below a pillar and fire in front of sun and its rays that surrounded by brown semicircle representing wheats. It has a gear and a red star on the upper part and 5 white ribbons bond the wheat.

The national anthem gained its official status on April 2013, as the national reform has finished. It has title of "Berjayalah Indokistan" (Be Glorious, Indkokistan), while the lyrics were made by Farhan Abdurrahman, the music is same as the Ukrainian SSR national anthem created by Anton Lebedynets.

Suwarnakarta is the capital city of Indokistan, and only city which gained federal status. According to the constitution, all new nations joined Indokistan and new landclaims must lend a small part of the new territory for the capital city.

Bersatu, Berjaya, Berdaulat (United, Victorious, Sovereign) is a hendiatris created in September 2011 and adopted as national motto as it gained its official status on April 2013. It has a meaning that the peoples of Indokistan that "united", will be "victorious" in any matters and above obstacles that may block the country from reaches its hope, and thus after it, "sovereignty" will be granted to the country.