From MicroWiki, the free micronational encyclopædia
(Redirected from Indokistani People)
Jump to navigation Jump to search 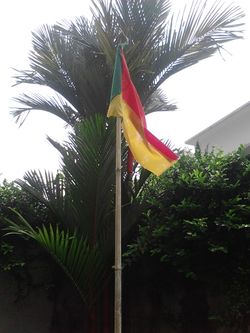 Indokistani flag flown above Suwarnakarta - both of them was the symbol of unity among Indokistani.

Indokistani (Warga Indokistan, or Rakyat Indokistan) was a term designated as a demonym for individuals that has been recognised as member of Indokistan. The term was for the first time used in 2012 as an umbrella term, and fell in disuse after the dissolution of Indokistan in 2016.

Indokistani citizens originates from different ethnic groups, with national authority recognizes their ethnic groups origin, yet does not make it an essential part of the national identity.

Javanese was the majority inside Indokistan, especially because almost entire part of the country were located in Java island and majority of citizens recognizes themselves as part of Java ethnicity. Beside of Javanese ethnicity, several other Indokistani citizens recognizes themself as part of Sundanese or Betawi ethnicity, mainly for regions located on the western part of Java.

Ethnic groups inside Indokistan was not scattered evenly. Aziziyah was known as the region with most Javanese citizens, counts as almost 100% of its citizens - this was because Aziziyah location in Central Java, the centre of Javanese ethnic groups. Before 2014, Barakstan also completely inhabited by citizens recognizes themself as member of Sundanese ethnicity. Citizens in Central Indokistan and Cussex were mixed between Sundanese and Javanese. Suwarnakarta, despite retains the same situation as Central Indokistan and Cussex, it has a significant part of Chinese ethnicity.

The committment was compromised during the leadership of Tian Abdurrahman in 2013 until 2014, on which he made ethnic groups a significant part inside his governance. His policy as the governor for Barakstan was slightly controversial because of his massive Sundanisation inside the region, while the rest of Indokistani regions does not include ehtnic groups identity and norms as components for governing the region. Tian justified his policy by saying that the authority have rights to preserve ethnic identity. This policy ended as Tian declared his province independent as Arkapore, a highly-Sundanised micronation, in January 2014.

Indonesian language was used nationwide, and it was the working language of Indokistanis, as government officials and citizens uses Indonesian on their daily activities. Beside Indonesian, a large prevalence of Javanese and Sundanese language also visible inside Indokistani states, yet no states had recognized those languages as official despite of its constitutional rights.

Indokistan constitutionally was a secular country, and the government has decided to not to recognizes any religions as official. The constitution also protects religious rights of its citizens, explicitly declared that citizens should be able to exercise their religious beliefs with no hindrance, and the government had no rights to control the religion inside Indokistan.

Islam was the most prevalent religion in Indokistan, with 100% of Indokistani citizens were Muslim. Because of this situation, Islam was once recognized as official religion on several stages inside Indokistani States - that decision was based only on the fact that the religion was shared by its entire citizen, instead of actually attempted to establish Islamic government inside Indokistan - echoing the state founders desire for secularism. Islam also had significant influence and role in state activities, the most known example was the Aziziyah Sultanate, with Islamic monarchy government, which was an anomaly inside Indokistani secular state.