The system became one of the most distinct cultural characteristics of Indokistani citizens inside Travenoras province during the entire historical era of the Second Republic, and was one of the most popular inside the country. Kryllic fell in use after the Emergency Government in August 2012, and relocation of the national capital from Jumstraad to Koskenniemi in Slobodan.

After the establishment of the Second Republic in 2011, Russian influence began to enters Indokistan, with its citizens began to grows liking to Russia. With Cyrillic as one of the most distinct part of the Russian culture, Indokistani citizens also had their curiousity on the alphabet grown. Citizens then began to write official documents with cyrillic, with intention to prevent non-Indokistani to understand the contents.

With support for official codification for the cyrillic increasing, Indokistani government decided to make the writing system official in April 2011. Beforehand, the authority took several alterations and modifications on the letters to suit better the spelling of Indonesian language. Since that time, number of citizens with Kryllic proficiency increasing, thanks to authority decision to open Kryllic classes for citizens and promote the usage as the "national pride".

In 2012, the Kryllic system was revised for three times by the authority, all includes addition of new letters to the alphabet. In August 2012, it was decided that transliteration of Kryllic would not be established as letter-per-letter transliteration, but to reflect on its spelling.

The usage of the alphabet was declining during the Emergency Government of Indokistan on the end of August 2012, caused by departure and inactivity of citizens able to write Kryllic. With new generation of arriving Indokistani citizens had no interest to learn Kryllic, the alphabet was already rendered obsolete as the Federal State of Indokistan was formed in 2013. 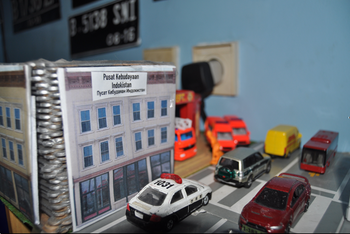 Ministry of Social and Culture efforts to promote Kryllic was done massively. Since the official adoption of the alphabet, the authority immediately opened a free Kryllic class for Indokistani citizens. The class was proved popular as citizens always flooded the class session and enthusiastically learn Kryllic. A paperwork also was set for the learners, which includes tracing characters, matching Kryllic with its Latin counterparts, transliterating words and sentences, and other practices. Famous students on the Kryllic class includes Farhan Abdurrahman and Badra Shidqi, which after several days of learning, has showed a good proficiency of the Kryllic.

Kryllic uses the same system used by the Russian Cyrillic alphabet, albeit with modifications which includes removal of unnecessary letters and addition of the new one to accomodate Indonesian language spelling, which was started entirely in 2012.

Since 2012, the regulators had three revisions on the alphabet system. In early 2012, letter ⟨Њ⟩ was added to the alphabet to match with Indonesian frequently-used digraph ⟨ng⟩, with the cyrillic form was adopted because the form was the most similar with the combined form of letter ⟨н⟩ and ⟨г⟩. Three digraphs were later added again in March 2012, with introduction of digraph ⟨ия⟩, ⟨ию⟩, and ⟨иё⟩ to represents Indonesian digraph ⟨ia⟩, ⟨iu⟩, and ⟨io⟩. The last revision in August 2012 includes the addition of letter ⟨э⟩ symbolising schwa sounds.