Indokistani Parliamentary Election, 2011 (Indonesian: Pemilu Parlemen Indokistan 2011) was the only Indokistani parliamentary election took place on March 2011 in order to fill the newly-formed Farhangrad Parliament. Three political parties participating on the election, which was the United Republican Party, People's Social Party, and the Islamic Party of Indokistan.

After the election, Indokistani population found the results unconvincing, which causes confusion inside the government because of citizens rejection on the results. A compromise between the government and participating parties later agreed to annul the election results as basis for parliamentary seats division, and instead equally divide the seats, resulting on each parties allocated three seats. With Nabil Ihsan seat went uncontested, it gives the United Republican a plurality and was able to maintain the government, later by forming a coalition with the People's Social Party.

After January Revolution successfully established Second Republic in the end of January 2011, political parties had been reorganised after their temporary suspension because of the Communist government. In February 2011, Communist Party of Indokistan, despite its prohibition after its involvement in the previous government, has been again allowed to be active, with Farhan Abdurrahman later decided to apply for party membership and immediately made the chairman of the restored party. The Communist Party later rebranded itself as the People's Social Party.

All existing political parties at that time, United Republican Party, People's Social Party and Islamic Party of Indokistan was invited to join the election, and after all of the parties fulfil their requirements, they was officially the candidates of the election. With Nabil Ihsan position as prime minister goes uncontested and remembering his membership inside the United Republican Party, the PPR gained advantages because they already had one seat already allocated for inside the parliament before the election. 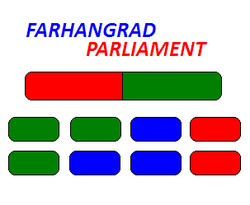 Final seats allocation for the Farhangrad Parliament after the compromise

This problem forced president Farhan Abdurrahman to not to ratify the results, which he instead had an emergency meeting with party leaders. After several discussions, it was decided that the election results would not be used as basis for seats allocation, and instead the party agreed to send their "most competent representative" to convene inside the new parliament.

The compromise results was a balanced sharing between all of the contesting political parties. With Nabil Ihsan of PPR goes undisputed, the PPR successfully maintained its plurality inside the new Farhangrad Parliament.