From MicroWiki, the free micronational encyclopædia
(Redirected from Organisation of Active Micronations (2019))
Jump to navigation Jump to search

The Organisation of Active Micronations (a name taken from a major micronational organisation that was active from 2009 to 2011; abbreviated to OAM), originally the New Eiffel Union of Micronations,[1] was an intermicronational organisation founded by New Eiffel and Livettree, created to stimulate foreign relations and the development of micronations, providing a space in which said states were able to utilize assistance from the organisation's community to design national symbols such as flags, logos, coats of arms or emblems in addition to the identifying marks of their public and private corporations.[2]

OAM members cordinated the writing of articles in MicroWiki, attempting to ensure an environment of peace and cooperation in which they could obtain the legal stability necessary for all citizens of micronations to start their own businesses and obtain funding.

In its heyday, the Organisation of Active Micronations was one of the fastest growing micronational organisations (within the MicroWiki Sector). This was most likely due to the fact that the organisation was not very exclusive. However, the organisation had been criticised for appropriating the name of the previous, well-known organisation, and further criticisms included allegations that "official meetings mostly consist of meme making."[3]

The Organisation of Active Micronations had achieved much since it's initial founding.

The organisation was created on 21 November 2018 by New Eiffel and Livettree. It was originally meant to be an organisation for trading and foreign relations. During its early history, the OAM was known as the New Eiffel Union of Micronations (this name was heavily criticized by early members for its seemingly imperialistic and possessive tone) more commonly refereed to as the NEUM or the NEUoM.

By late December of that same year, the NEUM had gained 12 member states, and together they started a new list of goals and purposes. The union obtained £80 funding from SURÜ, making it easier for the union to financially support its many micronational businesses. Foreign relations also quickly arose between member states, making it much easier for them to communicate. Additionally, the NEUoM at this time constructed its Discord server to act as a "new" permanent hub and primary meeting center (replacing google hangouts). 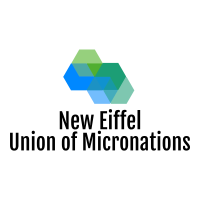 Erstwhile logo of the New Eiffel Union of Micronations

Growth slowed down quite a bit throughout early 2019, and many prominent longtime member states like the Blue Army became inactive. Although, several states joined in January–March 2019 (most notably the Tsardom of Phokland and the Empire of Emosia) inactivity became an increasing problem and there were preliminary talks of dissolving the union.

Besides the plaguing inactivity within the union, some things of note were accomplished. Most importantly, the official discord server was formalized and updated, allowing for more ease of access allowing the union to gain 7 new full members within the first week of the update. Diplomatic ties also grew, as it became easier and more efficient to communicate through the server. Ministers were also introduced, the first ministries being; Minister of Recruitment, Minister of help and other affairs, Minister of writing and grammar, Minister of Foreign Relations, and the Minister of finance.

After a boost in activity and the creation of a legislative committee (known as the Council of Legislature), the group decided that its working name, the New Eiffel Union of Micronations was too self-serving so on 1 May 2019 (following a referendum) the organization officially changed it's name to the Organisation of Active Micronations (hoping to present itself as the spiritual successor to the group that had previously held the name). Though the new name caused mild controversy throughout the micronational community, it was widely accepted and approved of within the organisation.

Following this, Aenopia (an influential and active member) announced that they would be leaving and Emosia threatened to do likewise. Seeing the dissolution of the organization as "inevitable", an Emergency Council was formed. In addition, most functions of the OAM were effectively shut down. As the Council met to discuss ways of reforming the OAM, the Chancellor at the time James Ellis resigned and was replaced in acting by former Secretary General (and influential representative) Charles Ross. Their primary reason for appointing the former Sec-Gen. was that whilst under his administration, the OAM had seen its largest growth and expansion (due in no small part to reforms fazed in by his governing cabinet). This however was seemingly ineffective at keeping the group together and member states continued to depart.

The apparent death knell of the OAM came on the 24 August, when (after hinting at their departure the previous day) the Tsardom of Phokland announced the formation of the League of Professional Nations, (functionally a successor to the OAM) and announced that they would be leaving the following Monday. With Phokland's departure, saw the exit of not only Charles Ross (who at this time was Phokland's representative) but also the Empire of Emosia and the Principality of New Eiffel (a founding member and the namesake of the organization's previous title). Numerous members who had left the OAM quickly turned to the league and joined soon after, whilst others such as Lytera, Aenopia and Plushunia instead turned to the OAM's once rival: the GUM. Shortly after the creation of the LPN, the league took over the OAM forums[4] (which had recently replaced discord as the OAM's primary meeting place) and following a short attempt to revitalize the OAM, the new acting Secretary General the Rt. Hon. Ian announced the dissolution of the Organisation of Active Micronations on 26 August 2019. 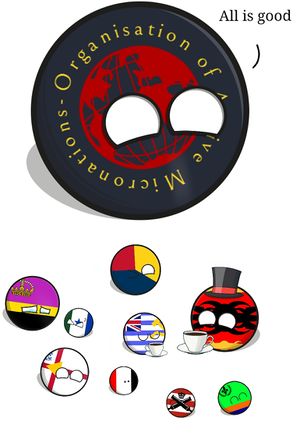 A microball satirizing the OAM leadership's lack of successful reform.

Due to the negative stigma of the OAM after its dissolution and the events leading up to it, the wider MicroWiki community was generally in favour of its dissolution. Zabëlle Skye has been cited as giving a certain amount of credit to the OAM in helping him in his fast growth among the "New Guard" in the MicroWiki Sector between April to July 2019 of that year, since it attracted many newer and smaller nations due to its relatively relaxed joining policy, making them aware of Smith as well as his nation New Eiffel. The OAM also brought together multiple nations which have kept close relations, such as Aenopia, Ponderosa Hills, Lytera and New Eiffel, which are all members of the TOES Sector.

Ian "Duck" would found the Organization of Active Micronations in February 2021 as an unofficial successor to the OAM, though its activity would quickly flounder and after a rebuking by many high profile former OAM members, it too would slip into inactivity and obscurity.

The OAM existed with several goals in mind, both within and without the micronational community.

The organisation featured a series of templates for members to ensure that all micronations had access to the creation of their own elaborate symbols such as flags, logos, coats of arms or images representing public and private corporations in each nation. With graphic design and cultural tools, micronations could launch actions related to the issuance of postage stamps, issuing banknotes or also creating their own magazines with cultural content.

OAM members had access to a completely open market where (through free trade/defense) many states were able to find allies with whom they could cooperate to produce statistics, working papers, books and other reference materials for the cultural and economic development of the community.

This division was created following a series of diplomatic scandals that rocked the OAM in early May 2019.

Through the development both in graphic design and in legal stability sponsored through the organization, members had access to a space where they could find potential commercial allies with whom to develop business relationships, being able to find sponsors or financing diverse businesses in the public and private institutions of each micronation.

Membership into the OAM was open to all micronations/geofictional states. The only requirements were that the nation must have the sponsorship of an already existing full member and the applying nation must be grounded in some form of reality (eg. the applying state cannot be a roleplay/LARP). The organisation had 44 full members and 5 observers at time of dissolution.

Members that were under "Red Status" were scheduled to be voted on whether they should be kicked or not, typically due to inactivity from the organisation.

Full members at date of dissolution

In order of date of joining:

Observer states with yellow indicates their full membership was to have been voted upon next meeting.

This list also includes nations that were preparing to leave the OAM.

The following are the ministers and final holders at the date of dissolution:

This is the official list of micronations that were going to representin the OAM at MicroCon and Pre-MicroCon.