This article is about the Aenopian city and ex-capital. For the territory, see New Llandudno and Subsidiaries.

(listen))) is a city located within Northern Aenopia, Empire of Aenopia. Comprised of a small section of forest next to a field in Northern England, New Llandudno was formerly the capital of both Aenopia and New Cymru until the latter's dissolution, before it lost the title to New Aberdare following the annexation of Greater New Aberdare. It is the county town of New Llandudno and Subsidiaries.[a] New Llandudno serves as the cultural, diplomatic, defensive and financial capital of Aenopia, with most Aenopian companies being located within the city including AenopiAir, Helliwell Systems and Traffyrdd Aenopia.

The economy of New Llandudno mostly consists of services and is an important finance hub in Aenopia, with a majority of Aenopian companies including Helliwell Systems and AenopiAir located in New Llandudno. New Llandudno is also renowned for its transportation system, with SR-01 and SR-02 both joining and intersecting the city at New Llandudno Square, whilst New Llandudno Joint Airfield is located to the west of the city.

The name New Llandudno comes from the Welsh seaside resort named Llandudno located in North Wales. Like numerous other Aenopian settlements, the city name was devised from a culmination of the prefix 'New' and the name of a Welsh settlement. The name originates from its initial annexation by New Cymru on 16 May 2019.

"Llandudnian" is the official demonym used to describe something belonging to or originating from New Llandudno, this is also the demonym for an individual from New Llandudno. Technically, "New Llandudno" can refer to the entire territory, or to the infrastructure of the area such as New Llandudno Joint Airfield; there is a small distinction between the subjects. 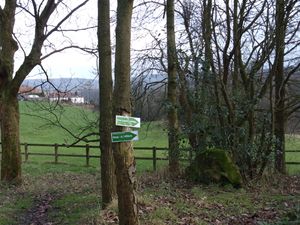 New Cymru and its conglomerates were dissolved on 30 June 2019 by Logan Ross.[3] Following the dissolution of New Cymru, a document was published highlighting which so-called "territories" would go to which nations,[4] with New Llandudno and Subsidiaries being annexed by Aenopia on 1 July 2019.

Following the independence of Aenopia on 15 August 2019, New Llandudno was named as the capital of the newly named Empire of Aenopia, and retained this title through the annexation of Aenopian Calver and Aenopian Teme in July and August 2019 respectively. It retained the status of Capital for a further 10 days after the Empire was formed before it was replaced by New Aberdare. 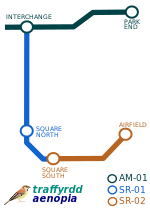 On 26 August 2019 however, the territory of Greater New Aberdare was annexed and as a result, New Llandudndo lost its capital status in favour of the smaller yet populated New Aberdare. During November 2019, it was decided that Aenopia needed a road system akin to New Eiffel's road system, which was described by HRH Logan I as being "Impressive". The territory was quickly chosen to be a suitable location for an experimental road system, and the routes were planned out following research into the suitable roads. The first of these, AM-01, was opened on 21 January 2020 during a formal ceremony, with plans to open SR-01, the road connecting the motorway to New Llandudno in Spring 2020.

New Llandudno is covered by trees and is 124m² (0.071 hectares). Situated next to the Calder Valley line, the city often see trains passing roughly every 15 minutes. In the center of the city, nicknamed New Llandudno Square, is a large boulder with a small tree growing behind. This is where SR-01 ends and diverges into SR-02. New Llandudno is surrounded on one side with an embankment roughly 70° leading up towards the main field in New Llandudno and Subsidiaries, and another at roughly the same angle which leads down to the fence separating the city from the railway line and more importantly, separating Aenopia with the United Kingdom. 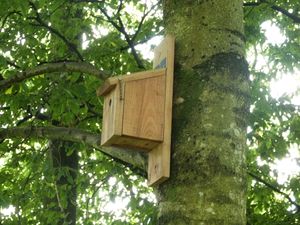 A birdhouse nailed to a tree above New Llandudno.

New Llandudno is a rich and varied habitat, containing a wide range of plants, mostly large mature trees and supports a large number of animals especially birds such as Wrens, Blue Tit,[6] Robin, Blackbird,[7] Song Thrush, Bullfinch (declining in numbers in the UK), Greenfinch, Jay and Pheasants.[8] Alongside birds, other mammals can often be seen in the area surrounding New Llandudno. Roe Deer are now seen on the field next to New Llandudno regularly, whilst Foxes, Rabbits and occasionally hedgehogs are seen. Moles also live in the field, as evident by the molehills.

New Llandudno experiences a temperate oceanic climate (Köppen: Cfb), like much of the British Isles, with warm summers and cool winters. Summer daytime temperatures regularly top 20 Celsius, quite often reaching 25 Celsius on sunny days during July and August in particular. In more recent years, temperatures have occasionally reached over 30 Celsius. There is regular but generally light precipitation throughout the year. Temperatures are usually within a range of 2 °C - 7 °C in winter but can drop as low as -11 °C. Winters are characterized by rain and, in recent years, large downfalls of snow. Summers are warm and humid with occasional heavy rainstorms, however, there are usually only about one or two thunderstorms per year.[9] New Llandudno's average annual rainfall is 806.6 millimetres (31.76 in)[10] compared to a UK average of 1,125.0 millimetres (44.29 in),[11] 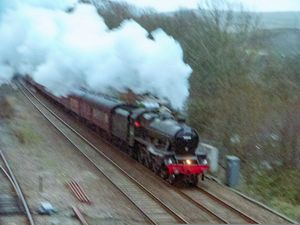 45699 Galatea passing the Aenopian city of New Llandudno on 29 February 2020. The territory is, however, not in view due to the position of the railway line.

Due to its location and infrastructure, New Llandudno and its associated territory is the most transport-reliant in Aenopia, with the territory featuring 3 roads and plans for a joint Airport and Airforce base. Situated next to the city of New Llandudno is the Calder Valley line, which often see trains passing roughly every 15 minutes to British settlements such as Manchester, Blackburn, Preston, Blackpool, York and Leeds. Plans are underway for a joint airport-airforce base to be built close to New Llandudno, for which will see flights to New Aberdare operated by Aenopian Air delivering small supplies. It is expected that the first flight will take off from New Llandudno Joint Airfield in 2021 utilising planes produced by Helliwell Systems.

SR-02 is the smallest road in New Llandudno and Subsidiaries and Aenopia, and travels across a short section of flattened grass from New Llandudno Square and SR-01 to the planned site of New Llandudno Joint Airfield. Thanks to the paths composition, it means that SR-02 is smoother than its longer and more important counterpart SR-01.

Aenopian culture primarily follows the basic principles of the Western culture due to its geographical location in the world and subsequently, its population. Some Christian holidays which have become embedded into Western society (Christmas, Easter, etc.) are recognised and celebrated by the population as National Holidays. New Llandudno also adheres to these principles as a city of Aenopia. 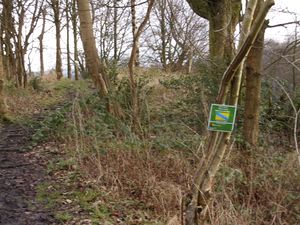 An example of French being utilised as the official Symbolic language in the Welcome to New Llandudno sign at the city's border.

English is the most commonly spoken language in Aenopia and the only language used on a daily basis for communication; it is the only language used for government and diplomatic business, although Welsh is rarely used for more ceremonial occasions and is featured as a secondary language on numerous Aenopian documents and treaties. Aenopia also ceremoniously recognises French and Welsh as a national language, with the former being recognised as a primary language of the territory of New Llandudno and Subsidiaries.

French has been adopted as the official symbolic language of New Llandudno and Subsidiaries and can be found in signs around the territory. It is not the official language of the territory, however, due to an absence of Francophones in Aenopia. An example of French being used within New Llandudno was the "Welcome to New Llandudno" road sign, which featured both English and French. Newer signs relating to the GUM Sister Cities Program feature Welsh instead of French.