From MicroWiki, the free micronational encyclopædia
(Redirected from New Paint)
Jump to navigation Jump to search

New Paint, officially the The United Territories and Provinces of New Paint, is a nation based in Southern Idaho. At it's most northern point, Isle Royale, is in US land, while the southernmost point is the Heard and McDonald Islands in Antarctica. The nation was created by JJ Maxwell. It was JJ's third attempt at a micronation, following the collapse of the Kingdom of Intarnica and The Democratic Republic of Charles, both former nations established by JJ. The nation was developing its constitution, and foreign relations; all of these were reported as having begun, and, according to Maxwell, should have completed by June 2023. New Paint also had a Discord.

The name of New Paint comes from painting, and the medium used to create the artwork. The name is vaguely inspired by New Caledonia, a French colony, New Eiffel, and New Florence. 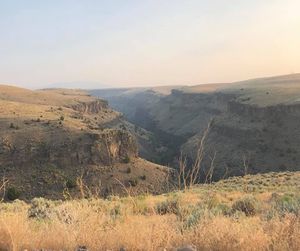 A view of the canyon that the capital is located in. Late summer, 2018.

The mainland geography includes that of Murphy Hot Springs, Idaho, a valley with East Fork Jarbidge River running through it.

The environment included a forested area, along with a valley, filled with sagebrush and a river cutting through New Paint. There were 2 bridges controlled by New Paint; Billy Bridge (to the North), and an unnamed bridge (to the South).

The flora of New Paint was that of Idaho. Some native flora are the Rocky Mountain maple tree, the Netleaf-Hackberry, kinnikinnik, and low sagebrush.

New Paint was a Fifth World Country under the age of one year. It's creation began on 21 February 2019.

On 24 March 2019, a Discord user by the name of adonic became the first official citizen of New Paint.

New Paint was dissolved on 1 June 2019. It is one of the four nations that now make up the Empire of Qoí.

The constitution was never finished before New Paint's dissolution.

Chancellor and Madame to the Chancellor

The Chancellor is the official head of the nation. S/he serves for five years, until they voluntarily step down as Chancellor, commit high treason, or die. The Chancellor's duties are to represent the nation, approve/veto laws, improve foreign relations, and to protect the State. A new Chancellor is determined by the vote of the people every 5 December 31. The winner is then appointed on January 7. The Chancellor Oath goes as follows:

I, the Elected and Chosen by the People of The United Territories and Provinces of New Paint, hereby swear to defend my nation with my life, to bring prosperity and peace to my nation and others, and hereby swear to protect and uphold the Constitution of New Paint, and any other critical government documents. God bless New Paint! Let flowers of sun and heaven illuminate our future!

Anyone who is a voting citizen can run for Chancellor.

Madame to the Chancellor

The Madame to the Chancellor is an animal chosen by the Chancellor to be the representative of the nation's overall stability, success-fullness, and care towards animals and plants. The Madame is also counted as part of the population, but not as a citizen. It must be female. It can be any domesticated animal, but not a wild or native animal. The current Madame is Tootsie, an Australian Shepherd and Border Collie mix. She is one year and nine months old.

Councils (officially the Council Representative for the State of [INSERT STATE NAME]) are assistants to the Chancellor, and also function as his Cabinet. They must win a vote for their state by running a campaign. If they win, they are sworn in on the same day as the Chancellor. The councils help the Chancellor in:

Council Representative for the State of Desert Hot Springs

The current seat holder for Council Rep. for the State of Desert Hot Springs is empty. When this seat is occupied they also function as the Director of the New Paint Environmental Agency. Their job as the Director is to approve the laws passed by Accentra, work towards more and better national parks and monuments, protect wildlife and their habitat, and to reduce pollution.

Council Representative for the State of Baja

The current seat holder for Council Rep. for the State of Baja is empty. When this seat is occupied, they are the functioning Head of the New Paint Human Development Association. They help provide basic needs to every citizen and resident of New Paint, including electricity, water, food, and shelter, helps the nation with housing and urban development, and running the New Patian Census.

Council Representative for the State of Heard

The current seat holder for Council Rep. for the State of Heard is empty. When this seat is occupied, they are the Administer for the New Paint Agency of Space Discovery, Exploration, and Research. Their job is to research space and other astronomical subjects, plan and recieve funding for space missions, and to study the skies using radio satellites.

Council Representative for the State of Isle Royale

The current seat holder for Council Rep. for the State of Isle Royale is empty. When this seat is occupied the are the Leader of the New Paint Agriculture Developer and Laborer. They control and help with the production of crops and food, and help the unemployed and the working people.

Council Member for the Cabinet (Female)

The female Council Member for the Cabinet is appointed by the Chancellor. Her job is the acting Secretary of New Paint's Education and Treasury Department. She helps the states with their education systems and government funds (including taxes).

Council Member for the Cabinet (Male)

The male Council Member for the Cabinet is appointed by the Chancellor. His job is the Secretary of New Paint's Transportation and Defense Department. He helps with public and private transport, and leading the military (army, nay, air force, etc.) He can also declare war, but it must be approved by the Chancellor and 3/4 of the Council.

Each council has sub-councils to run each election, trail, etc. in each land claim. These are voted for by the people every five years. They must serve unless they are unfit to, commit high treason, step down, or die. They have the same duties as their Council counterparts (e.g Council Rep. of Baja and the Sub-Council Rep. of Baja have the same duties.)

The police force is voted for every 6 years. In order to run for a position, one must have: 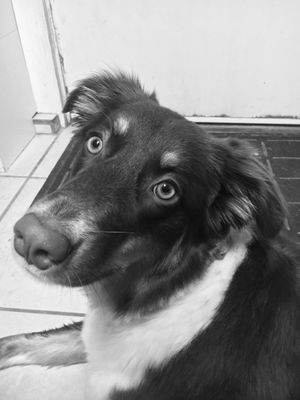 Citizenship in New Paint is determined by the following:

One has to pass the New Patian Citizenship Test[2] with a 90% or higher.

People have the right to protest, speak freely, think freely, petition, and assemble peacefully. The press has the power to report on what they want. However, if one is discriminating, harassing, or using slurs and derogatory terms, this is not secured by the Speech Act of 2019.

Weapons are allowed to be owned, but only through background checks and a New Paitian Gun Permit. This is secured by the Rights and Freedoms of New Paint.

Everyone has the right to remain silent, to have a lawyer, to have a fair trial and to have a public trial by the nation's government. However, if the citizens of New Paint disagree with the court's ruling, they can petition to have the sentence overruled. The citizens may then become the jury of the case, and the case goes through a re-trial.

Same sex marriage is legal in New Paint. The Chancellor has said that "...no one should be denied the right to love who they want...there's nothing wrong with loving the same sex as you." One can also choose to abstain from marriage and opposite sex marriage is legal as well. This is secured by the Marriage Act of March.

High treason is one of the only written laws of the land; there is no official constitution (as of 2019). A person commits high treason if:

A person is found guilty of Government Endangerment if:

A person is suspected and tried for terrorism if:

Money laundering, the act of having made money through illegal causes and attempting to pass it as legal, is illegal in New Paint. An individual is found guilty of laundering if:

A trial is summoned when one is accused of a crime or breaking a law. The judge, (the Chancellor), presides over the trial. The Head Chief of the Police Force is the functioning judge. A jury of 13 people is chosen randomly from a pool of voting-age citizens. Lawyers are present and present the case.

A referendum is held anytime there is a need for one. A qualified voter is:

There is only one political party in New Paint, but it is only temporary. It is to be dissolved once the councils and sub-councils are appointed.

There are no national monuments in the nation, but there is one national park. Riverside National Park is a small park that includes the East Fork Jarbidge River and a small section of the riverbank next to it. The park's size is 56.25 ft2.

New Paint is a member of Accentra, officiated on 24 February 2019.

New Paint is a member of the New Eiffel Union of Micronations, officiated on 24 February 2019.

New Paint is also working towards peace treaties with Landland, Quebec, Prairiland, the Commonwealth of Dracul, and the Empire of Huaisiao. New Paint wants to establish these treaties for good intent. Chancellor Maxwell commented on 24 February 2019, "...micronationalism shouldn't be about war and bloodshed. I speak for all of New Paint when I say that we want neutrality at all times...that's why we need these treaties; to say that we won't fight."

On 24 February 2019, New Eiffel and New Paint ratified a treaty of official recognization and peace between the states.

The United Police Force of New Paint is part of New Paint's military. The Chancellor is the Head of the Military, and his councils will help lead the nation in times of war. Any citizen of New Paint may request to join the military through the Department of the Militia. 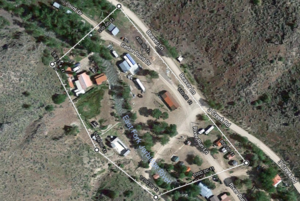 New Paint claims an area of 405.5 ft² in Murphy Hot Springs, Idaho. The Chancellor announced on 21 February 2019, that this "...is the most likely area of our territory...to become the capital."

On February 22, 2019, the Chancellor announced the official capital as Desert Hot Spring. Only he, his family members, and permitted guests may enter this land. Desert Hot Spring is the de jure capital. The de facto capital is the Chancellor's current residence in an unnamed location in the Western United States.

There are four states of New Paint. There is also one autonomous state of new paint

The usual food made at Desert Spring is a traditional Mexico breakfast, lunch, and dinner. They also make breakfast wraps and sandwiches. The Chancellor has commented on his love for cooking and baking; "Every Sunday I usually make something for my family...it's a very nice pastime."

A painted rock sits outside of the capital building. A sign is in the works for the capital city as well. All of New Paint's citizens are required to take four credits of art in high school.

Music includes piano, modern, and rock. The Chancellor plays the trumpet and piano in his pastime.

There have been no films made in New Paint. However, a movie is scheduled to release about the nation's capital.

Swimming and soccer are popular sports.

There are no new stations in New Paint.

Holidays are not a forced celebration. Any citizen can choose whether or not to celebrate. New Paint declares 7 national holidays.