New Florence is a territorial micronation in Europe. It was founded by micronational lawyer Anthony Clark.

New Florence declared independence from the United Kingdom in January 2019. The capital is Amerston and the largest city by population is Virginia an Ear (East Virginia).

New Florence is governed by a form of rights-based anocracy. The most senior government official is the Chancellor, who is head of state and de jure head of government. The current Chancellor is Anthony Clark. The President is the de facto head of government. The country has two unusual features to its system of government: it has an uncodified constitution, and it has six branches of government, instead of three. By the number of separate bodies, the Florentine government is one of the largest in the MicroWiki community; it has over 300 different institutions and agencies, divided between the six branches. New Florence follows a common law legal system.

Culturally, New Florence is influenced by both Scottish and Scandinavian culture. Its Scandinavian roots originate with its predecessor state, the Nordkavn Federation. Clark has publicly stated that he wants New Florence to have much more of a 'real-world' presence than many other modern micronations.

The name New Florence comes from the name of Florence Clark, a cat owned by the Chancellor, who was in turn named after the English musician Florence Welch. The name is also inspired by the Italian city of Florence.

New Florence was founded on 1 January 2019 by Anthony Clark. The early days of the country have been dominated by the release of three pieces of legislation - the Territories Decree 2019, the Citizenship Decree 2019 and the Expansion and Government Decree 2019 - and the expansion of the government's internet presence.

On 2 January, Florence Clark, a Norwegian Forest Cat belonging to the family of Chancellor Clark, become the first Chief Ambassador (although the Department of Foreign Affairs was not officially founded until 7 January).

Also that day, the National Expeditionary Society completed its first expedition, in Esperer.[1]

The same day, Chancellor Clark signed the Treaty of Comprehensive Partnership between New Florence and the Amissopian Federation.

On 9 January, the Department of Foreign Affairs began negotiations with the Palatinate of Uberquiesenberg regarding the potential establishment of diplomatic relations. The Treaty of Long-Standing Cooperation was signed two days later.

On 11 January, Chancellor Clark declared some of his future plans for the nation. These included appointing a president and electing a National Council, as well as establishing two new national parks in Esperer, building new diplomatic relations and expanding the Amerston Post.

In June 2020, New Florence became a crown dependency of the Abeldane Empire. The government briefly and unsuccessfully campaigned for statehood when the new Abeldane constitution was drafted.

On 2 March 2021, New Florence relinquished its claims to City Cowslip and Esperer. Chancellor Clark also dismissed the entire serving government, assuming all powers for himself. The government began an application for membership of the Grand Unified Micronational, led by the GUM Relations Office with assistance from the state branch's International Organisations Bureau, the Office of the Counsel for Treaties, and the International Communications Directorate. The application is being overseen by the General Inspectorate's offices for diplomacy, foreign aid, and intelligence and security.

Also in March, given that the Abeldane Empire was defunct, the Departments of Justice and Foreign Affairs jointly advised the Chancellor that New Florence's crown dependency was void. There was no way for New Florence to be removed as a crown dependency without the Reichsversammlung's agreement, and the RVS hadn't met for months. Therefore, the Advocate-General's Office advised the Florentine government to act as though it was a sovereign independent state. On 4 March, the Abeldane Emperor used emergency powers to amend the Constitution, allowing crown dependencies to secede unilaterally. New Florence immediately submitted notice of secession to the Kronrat.

New Florence became a member of the Grand Unified Micronational in early April. Clark (who'd been a delegate for Uberessenberg prior to New Florence's admittance) served as supreme justice under Chair Jack Dean.

In June, New Florence won an environmental law action in the GUM Supreme Court. The delegation successfully challenged an initiative that rewarded the purchase of plastic bags for life, arguing that it would harm the environment and discriminate against delegates on the basis of disposable income.[2] 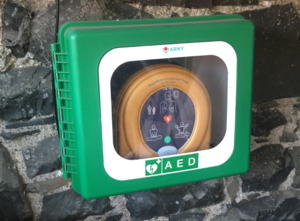 The AED device in Virginia an Ear

The Department of Health has jurisdiction for public health on Florentine territory. Amongst other things, it monitors the AED device installed in Virginia an Ear.

In January 2019, there was a brief health scare over an outbreak of flu.

Though there has likely been cases of COVID-19 in New Florence, none have yet been reported to public health authorities.

The region of Esperer, the main claim of New Florence, is surrounded by the territory of Scotland.

The territorial extent of Esperer is established by the Territories Decree 2019, while the New Florence's further land claims of City Cowslip and Hobart are set out under the Expansion and Government Decree 2019. 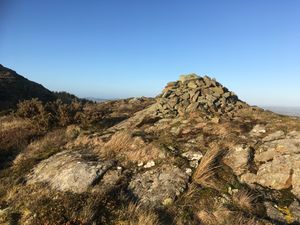 The cairn on Crag Brigh

Rising to 300 metres, New Florence's highest point is the summit of Mt Vraiment Grand. Just below it is Crag Brigh, a national heritage site. The National Expeditionary Society has begun a tradition that society members add a stone to the cairn on Crag Brigh on 2 January each year.

Esperer is situated in a rift valley, largely underlain by Paleozoic formations, affected by extinct volcanic features and glaciation.

Esperer's climate is temperate and oceanic, with mild winters and cool summers. Temperatures are usually lower than elsewhere in Great Britain, but heavy snowfall is relatively uncommon. Esperer is often extremely windy.

The wildlife of Esperer is of limited diversity. Most habitat is either moorland or farmland, although there are also areas of coniferous forest. Mammals in Esperer include red foxes, badgers, grey squirrels and roe deer. There is a large population of buzzards, kestrels and songbirds. 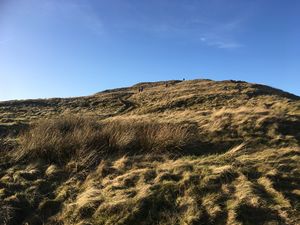 The two provinces, Aarhavn and Rystaden, are each governed by a provincial directorate. 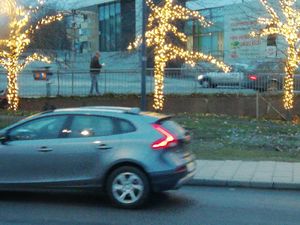 City Cowslip (no longer a region of New Florence)

New Florence is a unitary state governed by a rights-based anocracy. The Florentine government is unusual as it has six branches of government, as opposed to the more conventional three, and an uncodified constitution.

By a number of constituent bodies, New Florence has one of the largest governments in the MicroWiki community. The Expansion and Government Decree 2019 created over 300 different institutions and agencies.

The Chancellor is head of state and de jure head of government. They have absolute power, limited only by customary human rights protections. The Chancellor exercises the powers of all vacant offices.

Most executive power is exercised by the Grand Chamber, which consists of the Chancellor, the President, the Cabinet and any other individuals appointed by the Chancellor or President.

The executive branch consists of the office of the President, Advocate-General, the Leader of the National Council and 25 departments.

Most departments have multiple subsidiary agencies.

The judiciary is split across both the judicial and executive branches, and consists of the judicial branch, several executive tribunals, the Court-Martial and the Military Court of Appeals.

The prosecutorial branch is responsible for criminal prosecutions. It is led by the General Prosecutor, but also includes the offices of the Electoral and Voting Fraud Prosecutor and the Environmental Prosecutor.

The auditory and oversight branch is responsible for overseeing the other branches of government and providing politically independent services. It consists of the Statistics and Research Council, the General Inspectorate (which contains 42 different specialised offices), the Information Commissioner, the Electoral Commission and several other agencies.

On 7 January 2019, Chancellor Clark signed the Treaty on Comprehensive Partnership between New Florence and the Amissopian Federation. The treaty established the Council on Florentine-Amissopian Affairs and provided for cooperation on matters of criminal law, intelligence, territory and intellectual property. It also created a customs union between the two states.

On 9 January, the Department of Foreign Affairs entered into negotiations with the Palatinate of Uberquiesenberg with the aim of establishing diplomatic relations. The Treaty of Long-Standing Cooperation was signed on 11 January.

In March 2021, New Florence applied for membership of the Grand Unified Micronational.

States with which New Florence has signed a treaty

Other states which New Florence recognises

New Florence is a member of the following organisations: 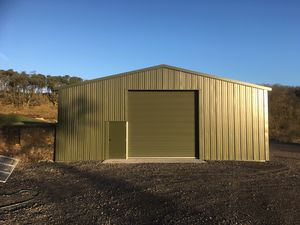 The Department of Interior is responsible for the National Bureau of Investigation (a body independent of the New Florence Central Policing Authority), which is tasked with major criminal investigations.

The Florentine Military is headquartered at Base страховит, in Lindeborg Municipality.

There are currently two forms of legislation:

Each region is policed by a separate police department, each of which come under the jurisdiction of the Central Policing Authority. 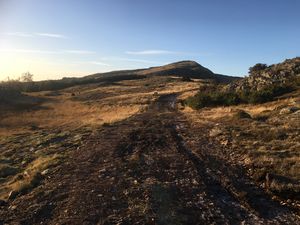 New Florence has strong Scottish roots. It succeeds the Nordkavn Federation, and has also inherited much of the Federation’s Scandinavian heritage.

New Florence is a founding member of the Micronational Heritage Association. 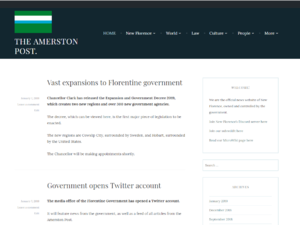 The main news source of New Florence is the state-owned Amerston Post. The Amerston Post is a subsidiary company of the Florentine Media Corporation, which is controlled by the Department of Media and Journalism. The Amerston Post holds archived posts dating back to November 2015 from the previous news sites, themicronational and the Eskhavn Guardian.