The Democratic Confederation of the Palatinate of Uberquiesenberg was a former constituent state of the Kingdoms and Lands Represented in the Council of the Triarchal Crowns of the Disciples (otherwise known as Mercia). For it's entire span, the head of state and head of government was Palatine-Viceroy von Uberquie. The Palatinate operated as a Semi-Confederal Constitutional Monarchy, based on some Revolutionary Theodorist ideology and also natural Uberquiesenbergian Monarchistic values and democratic confederal organisation. The Palatinate was organised into three major districts, with seven smaller sub-districts, to aid with administrative duties. The National Assembly, the Anglegenheitenort, was responsible for administrative (by way of it's regional representative membership) and legislative responsibilities. On 1 June 2020, the Palatinate joined a political union with the former Essian Commonwealth to form the Uber-Essian Union, also known as Uberessenberg.

The government of Uberquiesenberg is loosely defined as a Semi-Confederal Democratic Constituional Monarchy. The Palatinate combines several elements of historical governorship - including Imperial Prussian idealism and monarchy and Democratic Confederal or Municipal governorship. As such, Uberquiesenberg defines itself as a Theodorist nation, though the specific denomination of Theodorism is yet to be developed by the nation's statesmen. The central belief of this system is that the people are responsible for their own affairs, while the monarch acts as a symbol of unity, strength and determination and is thus the protector of a citizen's rights and the implementor of Liberty.

The government is currently relatively undefined, with only one official position that of the Viceroy. The responsibilities of the Viceroy is to form a government to aid the Régional with administrative duties and act as a higher municipality in the interests of unsolvable affairs at the local level, and to ratify laws in the name of the head of state. Due to the nature of the size of the nation, the only municipality that acts in any official capacity is the Government lead by the Viceroy.

The Régional of Uberquiesenberg are landed representatives of a respective territorial division, which harbours distinct cultural differences, within Uberquiesenberg. These divisions are, in excess, their own independent state within the Confederation and the organisation of which, internally, is subject to democratic decision by the subjects of that division. However, all states currently accept the Palatine as official head of state and government while population is sparse. Many territories are currently uninhabited - barring Halyards, the capital, where the Palatine resides. As well as this, there is an ongoing dispute about the Lord-Mayorality of Halyards and it's occupation by British subjects due to a housing development on previously uninhabited land. Halyards has it's own system of government, in which a local municpal government is appointed by the Lord Mayor, which is reponsible for local affairs under direct control of the Palatine. As such, Halyards can be seen as the only permanent state which makes up the Confederation, hence its position as the capital. 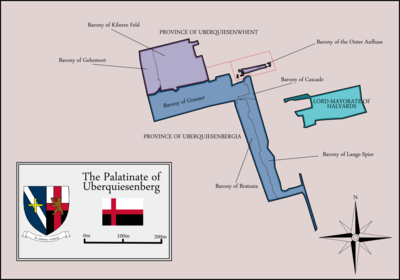 Map by The Uberquiesenberg Cartographers Co-Op

Foreign Relations, in Uberquiesenberg, are established by the ratification of a treaty through the National Assembly. In every case to far, the Palatine has been the signee, as head of state and defacto diplomatic ambassador for the Confederation, and this instituion is likely to continue in the future. Uberquiesenberg is open to diplomatic relations with nations of any discriptor to enhance its credibility as a major micronation.

The Palatinate currently holds relations with:

As well as mutual recognition, Esse holds a degree of authority over Uberquiesenberg, Esse militarily protects Uberquiesenberg. The Palatinate also holds join-governship over the County of New Halyards in Esse, which previously shared a flag with Halyards.

On the 3rd of July, 2017, Uberquiesenberg became a provisional member of the Grand Unified Micronational. By the 17th of July, the GUM accepted Uberquiesenberg as a full member state and became the Vice-Chair nation on the same day, due to the incumbent Palatine's position as Vice-Chair.

On the 16th of June, 2018 - the Palatine ascended to the thrones of the Abeldane Empire and it's constituent state, Alenskha. Thus, this formed a Personal Union between Uberquiesenberg and Abelden. On the 7th of January, 2019, the Palatine's partner, Sian, was appointed to the throne of Morgannwg, another constituent state of Abelden. Newton, incumbent Palatine, became the defacto King-consort of Morgannwg as a result. As such, Uberquiesenberg is effectively engaged in 3 seperate personal unions as of January, 2019.

The most notable institution of Uberquiesenberg is the presence of the commonly owned Uberquiesenberg Cartographers Co-Operative. Management of the co-operative is lead by the workers, though with only one member it is currently a self-employment venture lead by the Palatine-Viceroy. The goal of the Co-Operative is to design and distribute styleised maps of micro and macronations for use on the Microwiki. Often, the Palatine trades these maps for influence and relations with other nations as opposed to any monetrary gains. The Co-Op has developed maps for Uberquiesenberg, Mercia and Esse at current, as noted by their design and the presence of the logo acting as a compass point on every map. 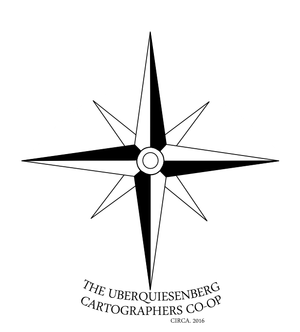 Logo of the Uberquiesenberg Cartographers Co-Operative.