Mahuset[note 1], officially the Confederation of Mahuset (Dutch: Confederatie Mahuset), is a self-declared independent nation-state, commonly referred to by external observers as a micronation, established on the 3 January 2016. It claims territories in Europe and Asia: the states of Matsia, Alkmaar, Geestmerambacht, Noorderhout, and Ihuset, as well as the district of Lazia and the territories of Lundenland and Mamucium, make up mainland Mahuset in Northern Europe, and the territories of Starnia and Virgo make up Mahusetan Hasanistan in Central Asia. It is frequently ranked amongst the world's least corrupt nations, and is regarded as a minor micronational diplomatic, cultural, and political power.

Mahuset is a federal state and a constitutional presidential republic, whose parliament is known as the Lazian Chamber, so called after the capital city of Lazia. It is lead by President Emiel Sebastiaan Hardy (as head of government and head of state) and Prime Minister Stephen Freayth (as deputy head of government and head of state). While the laws of the states are subordinate to federal law, the federal government does not have any regulations on the means for administering states and as such the states all have their own unique system of government. Mahuset has a free market capitalist economy, but also a high level of income equality, due to its small, mostly middle-class population.

Mahuset is a "fifth world" micronation, with the highest assigned score of 12 under the Boodlesmythe-Tallini System, and a score of 4.4 on the Categoric-Gradial System, also known as Linden's (Revised) System.

Mahuset can be subdivided between a number of ecoregions because of its climate and geomorphology, the Mahusetan mainland finds itself in the Atlantic mixed forests ecoregion. The country is consequently one of the richest in Europe in terms of biodiversity, this is however because of the large geographical spread of different Mahusetan territories.

Mahuset's wildlife is typical of the north-west of Europe, although several of the larger mammals such as the lynx, brown bear, wolf, elk and walrus were hunted to extinction in historic times. There are important populations of seals and internationally significant nesting grounds for a variety of seabirds such as European herring gulls.

Main article: Government of the Confederation of Mahuset

Mahuset is a federal, presidential, representative democratic republic with strong democratic traditions, with Lazia as its capital. The Mahusetan political system operates under a framework laid out in the 2019 constitutional document known as the Constitution of the Confederation of Mahuset. Amendments generally require a two-thirds majority of the Lazian Chamber; the fundamental principles of the constitution, as expressed in the articles guaranteeing human dignity, the separation of powers, the federal structure, and the rule of law are valid in perpetuity. 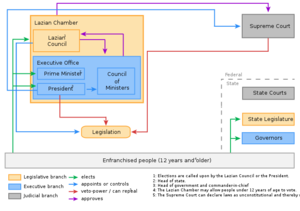 The political system of Mahuset.

By calling a federal referendum, a group of citizens may challenge a law passed by the Lazian Chamber, if they gather the signatures of ​2⁄5 of the Mahusetan population against the law within 100 days. If so, a national vote is scheduled where voters decide by a simple majority whether to accept or reject the law. The Lazian Chamber and the President both have the power to introduce federal referendums, which unlike referendums proposed by the general population, have the ability to introduce laws as well as challenge them.

Main article: Political parties in the Confederation of Mahuset

As the Confederation of Mahuset is a multi-party democracy, political parties in Mahuset are very common. Since the foundation of the Mahusetan government on 8 January 2016, the Mahusetan political system has been dominated by three families of political parties: the strongest of which are the Liberals, currently represented by the Classical Liberal Party (CLP); second are the Independents, currently represented by either Independent MPs in the Lazian Chamber or the Independent Chamber Group (OKF) and third are the Social Democrats and the Christian Democrats, both represented by the Social Democratic Party (SDP). Presently, there are four political parties operating in the Confederation of Mahuset and each have their own seats in the Lazian Chamber.