From MicroWiki, the micronational encyclopædia
(Redirected from Molossia)
Jump to navigation Jump to search

Molossia, officially the Republic of Molossia, is a North American micronation landlocked within the city of Dayton, Nevada, and with an enclave in San Bernardino County, Southern California. As one of the oldest fundamental micronations, it succeeded the Grand Republic of Vuldstein, founded by James Spielman and Kevin Baugh, now serving as its current leader since the transition from a monarchy to a republic in September 1999.

Vuldstein, founded in May 1977 and located in Portland, Oregon, was active for a short period which lasted until the end of the year, when King James moved to another city without renouncing his throne, leading the Grand Republic to a state of inactivity.[3] Baugh took control of the nation for the following 21 years, undergoing different transitions to several nomadic kingdoms, then a People's Democratic Republic in 1998 until its present state.

Molossia refers to itself as a "sovereign state" since 1977 and has declared itself to be in a state of war with East Germany since 1983. Appearing in the "Lonely Planet Guide to Home-Made Nations", Molossia is known outside micronationalism for its appearance in the 2010 Channel Awesome movie Kickassia, produced by That Guy with the Glasses, and receives more than 50 visitors each year.

The Molossian nation was founded on 26 May 1977. Known at that time as the Grand Republic of Vuldstein, James Spielman was declared King James I, and Kevin Baugh was declared Prime Minister. After a short period of sporadic activity, the nation entered into a period of dormancy. King James I, though still monarch, ceased to be active in the kingdom at that time. The Kingdom continued, without the direct participation of the King, and continued to be developed by the Prime Minister. In 1980 it was renamed the Kingdom of Edelstein, and in 1988 it was renamed again, this time as the Kingdom of Zaria. The Kingdom existed as a nomadic government, without a home. Carried on by the Prime Minister, the Government traveled to Europe, and after its return in 1992, the Kingdom prospered and grew culturally.

In 1995, the Kingdom was transplanted to the State of Nevada, in the USA. In 1998, the land was purchased that the nation could call home, and upon which the government was formally and officially established. In June 1998, the Kingdom was renounced in favor of a provisional Communist government. In September 1998, Molossia sacrificed its sovereignty and joined the United Provinces of Utopia as a province of that nation.

In January 1999 the UPOU ceased to exist as a nation, and bereft of a national government, the People's Democratic Republic of Molossia was declared, on 21 February 1999, with Kevin Baugh serving as Premier. 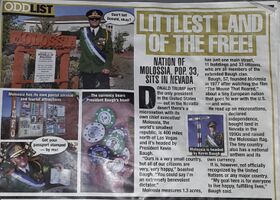 Molossia as seen featured in an edition of National Enquirer from June 22, 2020

In 1999, Molossia embarked on a serious path of developing itself as an emerging small nation, rather than a mere micronational project. The possession of physical territory made this course a tangible one, rather than a fantasy.

On 3 September 1999, the communist government was renounced, the People's Democratic Republic ceased to exist, and the Republic of Molossia was declared. The former Premier, Kevin Baugh, became the President of the new government.

In August 2003, Molossia expanded its frontiers for the first time and purchased land in Northern California, creating the first colony, Farfalla. This colony was surrendered in late 2005, only to be supplanted almost simultaneously by a new territory, Desert Homestead Province, located in Southern California.

On 22 May 2006, Molossia was attacked by the nearby small nation of Mustachistan, resulting in a brief war with that nation. That war ended on 8 June 2006, with a resounding Molossian victory. However, problems continued with that country, most notably with a crisis over the Mustachistan missile program in November and December 2006.

In September 2008, a long-forgotten Declaration of War was discovered, opening hostilities with East Germany. War was apparently declared on 2 November 1983, when Molossia was still known as the Grand Republic of Vuldstein. Despite East Germany being defunct since 1990, it still de jure exists in part in the form of the uninhabited Ernst Thälmann Island off the coast of Cuba, which was "donated" to East Germany as a gift by the Cuban government in the 1970s. Thus the war, at least in theory, continues, with no end in sight.

In 2010, the country was briefly subject to an "invasion" by Doug "the Nostalgia Critic" Walker and renamed to "Kickassia", as part of the creation of the feature-length comedy special of the same name for his website, Channel Awesome. The invasion soon fell apart and Molossia was restored.

In 2015, the Republic of Molossia organized and hosted the first ever edition of MicroCon, a convention for micronational leaders and delegates.

In April 2016, Baugh hosted a tour of Molossia as part of a special feature for the website Atlas Obscura.

Map of the main territory of Molossia

Molossia is located in the arid Great Basin region of North America, and maintains a typically dry Mediterranean climate.

Molossia has several tourist attractions and has had several tourists. Perhaps the most famous of all the features there is the Tower of the Winds, a tower with Tibetan prayer flags. Molossia also has a Peace Pole, a pole bearing the prayer May Peace Prevail on Earth in eight languages. A large portion of the country forms Norton Park, named after the self-proclaimed Emperor of the United States and Protector of Mexico, Emperor Norton.

Molossia has several awards and decorations. The majority of these have been rarely awarded, given the small number of Molossian citizens. The most commonly awarded are those frequently given as part of diplomatic exchanges or those persons whose relationship with Molossia is considered significant. These include:

In 2014, the Republic adopted the new national anthem Fair Molossia is Our Home, a rewritten version of La Zaïroise, the former anthem of Zaire. Previously, it had used Molossia, Nation In The Desert as its national anthem, based on the Romanian patriotic song Pe-al nostru steag e scris Unire.