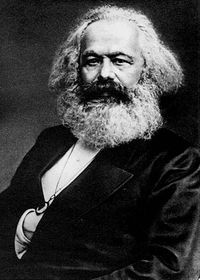 Communism is a collection of political ideologies and socio-economic theories, whose aims are the abolition of social class, the abolition of the state and the eventual creation of an egalitarian society based on common ownership and control of the means of production and property.

Communist theories are based on the principle that the proletariat - the working classes - are the source of society's wealth and are the basis upon which modern civilisation has been built. Communism holds that the proletariat are oppressed by the upper-class bourgeois. Classical communism is noted for its staunch opposition to imperialism, nationalism and capitalism. There are many different branches of communist thought, such as Marxism, Leninism and Trotskyism, which have different interpretations of the theory.

During the early to mid 20th century many countries calling themselves 'communist' were established in Europe and Asia, though most agree that these states were, in fact, socialist due to the very presence of a state and often the frequent promotion of nationalism. This exhibits a common misconception about socialism and communism, in that one is often confused for the other.

Communism is sometimes referred to as one of the most common choices of government for micronations, especially since the early 2000s. Some[who?] have referred to most of these micronations as "costume communism" - that is, someone who thinks being communist is a "cool" rebellious thing to do, or maybe enjoys the aura of "evilness" communism carries with it in the Western world and not people who are actually acquainted with the works of Marx or are dyed-red, card-carrying supporters of Communist Parties. An exception is Leopold Deuff, president of Republic of Jailavera, who is a member of the French Communist Party in the macronational world, and Harold Duighan, the President of Wamong, who considers himself a legitimate Communist, specifically a Maoist.

Nevertheless, many micronations calling themselves 'communist' exist, despite some being merely Socialist in nature; most notably the existence of a State. Some have developed extensions of existing ideologies, such as Rennie-Gaffneyism and Communalism.