Fascism is a political concept that was developed in the early half of the twentieth century by Benito Mussolini and the Italian Fascist Party [1]. It has been argued over what exactly lead to the development of Fascism as an ideology. Fascists believe that the economy and politics should be organised around Corporatism, that is, mass solidarity and societal roles, as well as strong centralised government & leadership, nationalism, freedom to create war & violence and singular collective identity.

The unstable and heated atmosphere present within many European countries after World War One created the perfect conditions for Fascism to exist. It was thus that Fascism came to be in its present form in Italy in the 1920s. Benito Mussolini and his 'Blackshirts' seized power from the Italian Government at the time, which was inefficient and corrupt. In its place, Mussolini installed his own fascist government, with him as its leader, or 'Il Duce'. 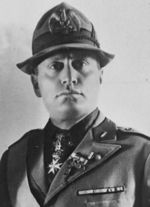 At the heart of the ideology at this time was reverent nationalism. Mussolini pledged to assist Italy's World War One war veterans and turn the Mediterranean into 'mare nostrum' ("our sea" in Latin).

The National Socialist Party in Germany, led by Adolf Hitler, were inspired by the successful Italian example and Mussolini's triumph, that they attempted their own coup against the German Weimar Government in 1923, know as the 'Munich Beer Hall Putsch', but which was unsuccessful.

The ideological origins of Fascism may be traced as far back as the Ancient Greeks, with Plato's 'Republic', in which he outlines the basis and operation of the perfect political system. In it, the 'perfect political system' that he creates is a system of elite minority rule by highly educated, intellectual rulers called 'philosopher kings' who were within a class of elite warriors named 'guardians' that were allowed to exercise total control over the politics and security of a society. This work is credited with establishing the first roots of the modern fascist ideology.

Mussolini studied Plato's Republic, but also the renowned Italian political author, Machiavelli's equally famous publication, 'The Prince'. Mussolini was in agreement with Machiavelli's statements of the personification of the state, and sympathised with Machiavelli's negative conception of most people having the tendency to be self-centred and unethical.

Few Micronations choose Fascism for their nation due to the modern negative connotations attached to it. For the most part, it is frowned upon by the micronational community, and it remains to be seen if this type of society can be made to work among micronationalists.

There have been several Neo-Fascist movements in the micronational world, however few have been successful. The Social Republic of New Europe was a brief wartime Fascist state, although it perished due to a Loyalist victory in the New European Civil War and lasted only 10 days. A new Fascist micronation is Timmystan with many members with undying loyalty to their leader, a decent economy, and a fairly powerful military. There is a small yet notable Fascist movement in Monovia, which is mainly supported by working class citizens. It is notorious for its tactics of Direct Action and interrupting Reichstag meetings. There was a large Fascist movement in O'Duighan that ruled the nation for a brief time, until Socialists couped the government, and the nation flipped to Communism after O'Duighan was absorbed into the Republic of Wamong and the Working People's Duighanist Party seized power.