Repositocracy is a theoretical family of legislation development paradigms and a type of Interactive Democracy. It was inspired by the development models of Linux distributions, and was originally conceived in 2012 by Miles B Huff, then an undergraduate student of political science at FSU. It served as a stepping stone to Theodia's modern legislative system.

'Repositocracy' is a neologism derived from 'repository' and '-cracy' (from Greek '-kratia', meaning "power, might; rule, sway; power over; a power, authority"[1]).
Originally, the ideology was called 'Repocracy' (from 'repo', a shortened form of 'repository') but it became the modern form, 'repositocracy', after Miles learned of the negative meaning of a homographic neologism meaning 'corrupted republic'. This name change happened on 2013's June 7.

Comparison to other legislative paradigms 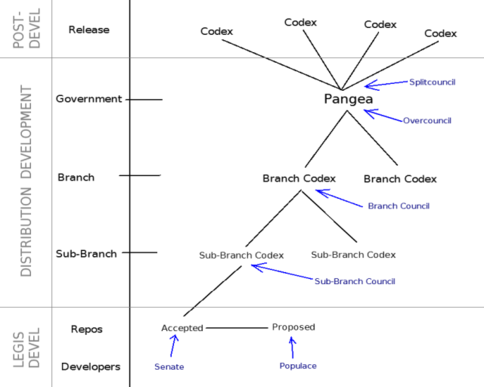 Example development flowchart of a Repositocracy

Pros and cons of repositocracy

Repositocracy was conceived to solve several issues in traditional legislative development models, and has several benefits:

However, repositocracy also has certain drawbacks; this eventually led to its replacement by a much simpler system in Theodia. These drawbacks are as-follows:

The only country known to have attempted to adopt a repositocratic system at any point in its history was the Kingdom of Theodia. Its intended implementation of repositocracy was as-follows:
It was to be a system of hierarchical repositories, with each branch being a sub-subject of its dominating subject (ex.: Government > Economics > Fiscal Policy). Legislation, often shortened to "legis" or referred to as "software", could be written by any citizen, provided its whole contents were publicly available at all stages of development -- ie, all legislation had to be open source. Repositocracy would have all the benefits of open source development, such as increased protection from bugs and from certain sneaky unwanted features.
All citizen-developed software would automatically enter the "Proposed" repository or its respective branch (for example, Fiscal Policy Proposed, Monetary Policy Proposed, etc.). All branches would contain such a Proposed repo, in addition to an "Accepted" repo. Citizens would be able to continuously and freely vote how much they like a certain piece of legislation by rating it on a 7-point Likert scale. Votes would be weighted per each person's experience in the area. For example, a macroeconomics professor's vote on economic legislation would be weighted more heavily than a person with no experience in macroeconomics. After a piece of legislation had a high-enough rating, it would have entered into its branch's Accepted repo.
There was to be a single dedicated council (termed the Senate) which developed legislation. All legislation developed by the senate would automatically enter into an Accepted repo, but it could still be moved to Proposed by the population if they rate it poorly enough. Although the Senate would be able to draft legislation, it would have no ability to pick what actually becomes law. Instead, there would be council for every branch, with each being representatively sampled from all citizens with a certain amount of experience in the branch's subject. Council members were to remain anonymous for the short whiles that they were in office, and their selection was to be staggered so as to provide stability. It was hoped that this, in tandem with the rating system, would minimized the amount of negative legislation produced by lobbying, bribes, crony capitalism, ignorance, etc. Council members would not be allowed to draft legislation, but they would be allowed to pick what software becomes law. Only software in an Accepted repo would be selectable.
As an example of how this all works, the Monetary and Fiscal Councils would select legislation from their respective Accepted repos. Next, the Economics Council would consolidate their changes to ensure that there'd be no conflicts. At the top of the chain, then Governmental Council would consolidate the Economics and Foreign Policy etc's respective codeces, again to iron out any potential conflicts. After a single, monolithic codex (termed "Pangaea") had been produced by this process, it would have been divided up into several categorized codices, for ease of use and readability. A new version of the country's distribution would have been made available every two Thirds, which was intentionally the same duration as OpenSUSE's development cycle.