Arbonia or naively Àrbonàr (lit. the tree lands) and it's city Sunin are the most recent additions to the Kingdom of Falcar, being officially founded on the first of December 2017, and since then has been the capital of the kingdom. it is the current residence of the monarch, as well as the current headquarters for the Falcarian Defence Force, Royal Falcarian Postal Service and the Bank of Falcar. Arbonia is completely landlocked by the nation of Australia.

Arbonia lies 15 kilometres (9 mi) north of the former capital of Hawkepool within Inner and Outer Falcar, and 105 kilometres (65 mi) south-east of the main Falcarian port of Svoboda. Arbonia exists within the geographical area of the Northern Tarndanya Plains.

On the 28th of December 2017, The Flag of Arbonia was officially announced as a lime green flag with a bottom streak of deep ocean blue, consisting of a upper left hand print of a shield defaced by a eucalypt leaf. The state retains the coat of arms of the mother nation of Falcar. 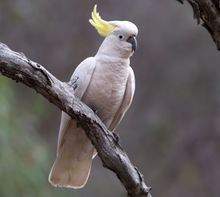 A Sulphur-crested cockatoo, the most common bird and one of the state emblems of Arbonia

As the 2017 Falcarian Census was completed prior to the annexation of Arbonia, an extensive survey of flora and fauna has yet to be completed, although many species do frequently occur and are known to exist within Arbonia. Outside of the Royal Botanical Society of Falcar, some species of plants include

Arbonia is also home to a variety of birdlife, including but not limited to

The state exports a number of products including specimens of plants, monetary items, and clay pottery.

on Christmas day 2017, the monarch Todd Leon announced that increasing production and creating state revenue within Arbonia was part of the Falcarian Christmas resolution and plans are to be announced within the following months to aid existing industries to increase output as well as found new state-owned corporations in broader market areas.

Also known as the Arbonian Library, or (according to legislature) the Royal Falcarian Library is the national archive and library of Falcar. It consists of a broad collection of photographs, physical and digital literary texts, botanical specimens, media recordings in various formats and historical records on various subjects. It is based within the capital of Sunin within Arbonia.

The library has a variety of duties outlined within it's founding document The Text-Audio-Visual Copyright and Conservation Act 2017 including;

Media is classified according to content, which includes E - Exempt Content, C - Childrens Content, YT - Young Teen, T - Teen, MT - Mature Teen, AM - Adult Material, EX - Extreme Material, XX - Pornographic Material or are otherwise refused classification and banned. E to T classifications are assumed to be acceptable for most audiences, while MT to XX material are restricted to specific age groups by law.