Under the Flora Act 2016 Sec A Part II the Duties of the Company and Wildlife-General are;

As the Flora Act gives the powers to introduce & erradicate as well as powers to regulate pest control to the company, the wildcraft-general publishes a List of Prohibited Species at his discretion, importation or introduction of a species listed into any Falcarian area is an offence (Flora Act 2016 Sec B Part II)

Pine of The Kanes 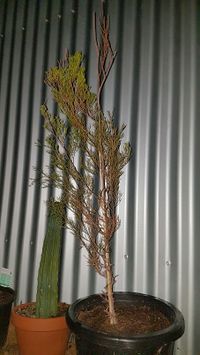 The Pine of The Kanes, a culturally significant Callitris preissii. Photographed during the 2017 Census

The Pine of The Kanes was officially designated as culturally important. It was used as an example of wildlife from an island claim previously made by the nation. It comprised part of the monarchal collections of the Royal Botanical Garden and was listed as at risk during the 2017 Falcarian Census. The Species, Callitris preissii was the only plant within Falcar in the Genus Callitris. It was later reported to have died during the extreme heat of the 2018 summer.

The Royal Botanical Garden of Falcar is a botanical collection situated within Arbonia, officially dedicated to the collecting, cultivating and exhibiting of plants & fungi.

The original collection originated from monarchal collections, comprising of few succulents and common herbs; it has since performed independently of the monarch and currently 64% of the botanical collection is owned by the Royal Botanical Corporation, rather than The Monarch or other third party lenders.

As of the 2017 Flora & Fauna Census, the Royal Botanical Garden comprises of the following plants;

The most common genus is Aeonium Succulents with 7 separate species.