Qaflana, fully known as the Holy and Exalted Empire; Bob's Realm of Qaflana, is a self-declared sovereign state located within the United States and the United Kingdom, specifically the U.S. states of Alabama and California. As well as being bordered by the United States and United Kingdom, Qaflana is bordered by the Empire of Aenopia and State of Vishwamitra.[a] Qaflana initially declared independence from the U.S. state of Alabama on 28 April 2019. Qaflana is a unitary parliamentary semi-constitutional monarchy.

Qaflana was notable for its membership in the Organisation of Active Micronations (New Eiffel Union) from May 2019 until its dissolution on 26 August 2019. Qaflana was formerly a dominion of the Empire of Emosia from 22 June until its independence on 20 July 2019. Founding father Alex Halbesleben abdicated in favour of the Emergency Emperor and former Emosian Governor Logan Ross on 26 September 2019 before placing Leon Montan in power. Qaflana entered into a state of inactivity from September 2019 until May 2020, when it was reformed as the Holy and Exalted Empire; Bob's Realm of Qaflana by Leon Montan and Logan Ross.

Qaflana is an active and prominent member of the Cupertino Alliance, with current delegates Thorin Neal and Jayden Lycon formerly serving as the Minister of American Affairs and Chair of the Board respectively. Qaflana was ranked 6th in the June 2021 Cupertino Member Positivity Survey, after previously ranking a 20th and 29th in the October and December 2020 surveys respectively.[1][2][3]

Qaflana was initially formed on 28 April 2019 when a few students decided to break away and start a new nation. Initially it was a democracy made up of a few citizens. On 10 May it was admitted into the largely controversial Organisation of Active Micronations (2019), where Alex and Qaflana itself became largely influential within the organisation.

On 22 June 2019, it was annexed as a dominion of the Empire of Emosia as the first of two Dominions (the other being Aenopia). This was to help develop the nation further and prevent any possible inactivity. It declared independence from Emosia on July 20, 2019, almost a month after being annexed, and declared itself as an Empire the next day. However, by November, the nation had become defunct after being neglected by the-then Emperor Leon Montan.

In late May 2020, it was decided to reform Qaflana by Leon Montan (who had been crowned following the abdication of Logan) and the ex-Emperor Logan Ross.

Qaflana is an executive constitutional monarchy previously under the reign of Alex Halbesleben before being handed down to Logan Ross and later Leon Montan. During the Alex-era system, laws were created by either Parliament or by the Emperor. The other had pass or sign the bill in order for it to become a law.

The Emperor had the power to create Ministries which had a designated Minister. Qaflana had a Ministry of Transport, headed by Logan R. of Aenopia, and a Foreign Ministry, headed by Leon M. of Ponderosa Hills.

Qaflana actively engages in formal and informal diplomacy with other nations, for which are formally conducted by the Crown and Government. The nation has signed formal documents with 2 other sovereign states, and recognizes the existence of 10 other nations, without the signing of Treaties to legally bind this. Qaflana initially established foreign relations before being annexed by Empire of Emosia, however these were voided. After its independence, Qaflana established limited diplomatic relations with Plushunia.

Qaflana recognizes the sovereignty of these states, however, has not engaged in formal diplomacy. Recognition was formerly given to all members and observers of the now-defunct Organisation of Active Micronations (New Eiffel Union). Recognition of these Sovereign states does not equate to diplomacy including the signing of formal documents.

As part of its policy on international affairs, Qaflanan relations are active and are conducted under the prerogative of the monarchy. Bilateral relations are usually established with the signing of a treaty of mutual recognition or other methods of diplomatic relations treaty typically provided by the Qaflanan government. As of August 2021, Aenopia has signed formal documents with 3 other sovereign states and formerly maintained relations with 1 other sovereign state. Qaflanan foreign affairs are typically stringent in comparison to foreign affairs of other nations. 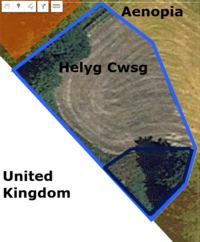 A map of Helyg Cwsg, the town of Halbesleben is highlighted in dark blue.

Qaflana is made up of 6 territories located in Alabama, California and England. These consist of 3 uninhabited territory, a school playground and 2 inhabited territories - one of which is the Capital Qafla. 4 territories were downgraded to the status of 'Homeland Territories' on 11 July 2020 during a Senate meeting.[9]

Qaflana also has a territory located within the UK. Helyg Cwsg (Welsh for Sleepy Willows[10][11] and a reference to Alex Halbesleben and his erratic sleep pattern) is bordered by fellow-ex OAM member and Emosian state Aenopia's New Llandudno and Subsidiaries and the United Kingdom.

Qaflana was home to a wide variety of species, primarily forest animals.

Helyg Cwsg experiences a temperate oceanic climate (Köppen: Cfb), like much of the British Isles, with warm summers and cool winters. Summer daytime temperatures regularly top 20 Celsius, quite often reaching 25 Celsius on sunny days during July and August in particular. In more recent years, temperatures have occasionally reached over 30 Celsius. There is regular but generally light precipitation throughout the year. Temperatures are usually within a range of 2 °C - 7 °C in winter but can drop as low as -11 °C. Winters are characterized by rain and, in recent years, large downfalls of snow. Summers are warm and humid with occasional heavy rainstorms, however, there are usually only about one or two thunderstorms per year.[12] Helyg Cwsg's average annual rainfall is 806.6 millimetres (31.76 in)[13] compared to a UK average of 1,125.0 millimetres (44.29 in),[14]

As of August 2021, Qaflana does not maintain a standing military. During its time as a Dominion of Emosia, Qaflana's military consisted of the 6th Infantry Regiment of Emosia.