From MicroWiki, the free micronational encyclopædia
(Redirected from Taslavia)
Jump to navigation Jump to search

Taslavia, officially the Kingdom of Taslavia (Portuguese: Reino da Taslávia), is an autonomous territorial entity which claims to be a sovereign state but is more commonly referred to as a micronation by external observers. Founded in Santo André, São Paulo, Brazil, Taslavia declared independence in 14 December 2020. It is governed as an autocratic constitutional monarchy that wants to promote and honor the traditions of the Italian immigrants community that lives near the kingdom and deeply influenced the culture of Taslavia.

The word Taslavia don't have a proper meaning, being the junction and some adaptation inspired by the Italian names for Tuscany, Lazio and Veneto. 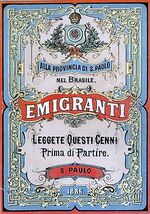 Italian migration to Brazil began in 1875 when Brazil began to promote migration to the country in order to increase its population and therefore created 'colonies' mostly in rural areas for Italians and other Europeans to migrate to. Between 1880 and 1920, more than one million Italians immigrated to Brazil.[2] Italian Brazilians are the largest number of people with full or partial Italian ancestry outside Italy, with São Paulo being the most populous city with Italian ancestry in the world.

Many Italians was naturalized Brazilian at the end of the 19th century, when the 'Great Naturalization' conceded automatically citizenship to all the immigrants residing in Brazil prior to 15 November 1889 "unless they declared a desire to keep their original nationality within six months."[3]

Over half of the Italian immigrants came from northern Italian regions of Veneto, Lombardy and Emilia-Romagna, and from the central Italian region of Tuscany. About 30% emigrated from Veneto. On the other hand, in the 20th century, southern Italians predominated in Brazil, coming from the regions of Campania, Abruzzo, Molise, Basilicata and Sicily.

Santo André registers the presence of the Italian community for more than 140 years, since it was in 1878 that the first Italian immigrants began to arrive in Brazil. In the region, Santo André did not initially have a colonial settlement to receive immigrants, but gathered since the 19th century, around the railway station, opened in 1867, so many Italian families that in 1900 an entity was founded to aggregate them: the Italian Society of Mutual Help Savoy, the Italian-Brazilian Society of the present days. In 1878 and in the following years, Italian families moved from São Paulo to Santo André, due to the facility provided by the train station. Since then, they have helped to build the city of Santo André.[5]

During a conversation between Oscar I, Emperor-King of Karnia-Ruthenia and his cousin, Guilherme I Ítalo, King of Taslavia, about the feeling of belonging to a nation and the concept of nation and state, he mentioned how important the cultural element was for most of what he said, even for micronationalism, an activity the archduke was aware of since 2010's, when both studied the idea of founding a project of their own. The conversation was made near the banks of the Billings Reservoir, where the parents of the archduke live. With the privileged view they had, they saw a small expanse of land a few meters away from the bank. The archduke explained that in times of drought, when the level of the dam dropped, these apparitions were common.

The ensuing conversation, in fact, established the means by which the new kingdom would be constituted. Geography was in sight of them, having determined, further, that for an extension of 15 meters long by one meter wide on the bank immediately in front of the island now called Taslavia through a play on words joining the words "Tuscany","Lazio" and "Venice", "Idolinas" would be founded, another semantic joke between the words "islands" and "ideal". The system of government, of course, would be a monarchy. Despite the republican and leftist political propensities of the archduke, he was convinced that he belonged to a well-established and recognized dynasty, and aside the traditional aspect, an autocratic monarchy, in addition to being practical for governing, was better seen than a dictatorial republic, and so agreed.

Arms of the King, with heavy Italian references.

Founded on 14 December 2020, the State took on its contours and created its own identity in the days that followed. The new king embraced the Italian culture that surrounded him, and considering that his name was a more than sufficient sign, he chose to reign as Guilherme Ítalo - "a sample to the emperor and his people", as he said. That same day, as a condition for accepting the throne, he declined any offer on Taslavia to integrate the Empire as a website, but accepted joining the Imperial Circle until he understood micronationalism better. The flag caused some discussion, but the so-called "imperial faction", represented by the Emperor of Karnia-Ruthenia was defeated and the flag of Duchy of Modena and Reggio, proposed by the "royal faction" was chosen. The idea was to merge the colors of the Empire (red and white), with the colors associated with Italy, the Savoy azure, a color also related to the Italian unification and to the Italian community in Brazil. Considering the inspiration in Modena and Reggio, the arms would follow, at some instance, some similarities.

On 30 December, the Imperial Council of Karnia-Ruthenia, deciding about territorial changes, agreed to the plans of the Emperor to transfer Horvatia to Taslavia, considering the low activity of the kingdom and its geographic proximity to Taslavia. Despite some conversation on dissolution, Horvatia became part of the Idolines through the Treaty of Saint Sylvester, signed on 31 December 2020.[6]

Located at an average altitude of 760 meters above sea level, and inserted in the plateaus and mountains of the East-Southeast Atlantic, being close to Serra do Mar, the predominant vegetation is the Atlantic Forest, a humid mesothermal subtropical climate with temperature annual average is around 19 °C. The Taslavia proper, an island located at the Billings Reservoir is inserted in this area and is composed basically by sand, as much as the Idolines, the strip of land on the banks of the reservoir, connected to the mainland.

A more distant territory, Horvatia, located in São Bernardo do Campo, São Paulo, Brazil, was granted to the Idolines by Karnia-Ruthenia through the Treaty of Saint Sylvester on 31 December 2020. The Horvatian flag became the flag of Idolines.

In practice, Taslavia is a constitutional monarchy, but the monarch still retains tremendous power, to the point that the parliament's influence on political life is negligible. In some elements, considering the popular support, a possible description of the political status of the kingdom is that a benevolent dictatorship is in action, since the king exercises absolute political power over the state but is perceived to do so with regard for benefit of the population as a whole. Other analysis appoints that, having more power than constitutional monarchs, who are usually vested by law and counterbalanced by a legislative authority, Taslavia is a constitutional, but also an autocratic monarchy.

Taslavian international relations are heavily-based on the relations provided by Karnia-Ruthenia, since it is their major-ally, and by principle, it's ruled by non-intervention, self-determination, international cooperation and coordenation and the peaceful settlement of conflicts as the guiding force in their relationship with other micronations and multilateral organizations. According to the Constitution, the King has ultimate authority over foreign policy, although under confirmation of the Ministry of Foreign Affairs of Karnia-Ruthenia.

The first micronation to recognize Taslavian independence was the Karnia-Ruthenia on 14 December 2020, being pivotal to its very creation. Taslavia has signed the Treaty of Persenburg, the Protocol of Goetha, the Treaty of Santiago and joining the Conference of Santiago as an observing member, the Convention of Mauritsstad, the Convention of Fruchemburg, the Protocol of Klöw and the Montediszamble Convention. This moves inserted Taslavia as a officially derivatist micronation within the Brazilian sector, but also being a member of the Imperial Circle and, this way, being leaded by Karnia-Ruthenia.

Taslavia has been in a stable and controlled ascension, with the GDP per capita following on the same course. Active mainly in the service sector, Taslavia has an estimated labor force of over 5 people. The country has been expanding its presence in intermicronational financial markets specially through the development of the Conference of Santiago Common Market, where Taslavia figures as an interested party. Major export products include manufactural goods, information technology and services. The Ruthenian Mark was adopted as official currency on 26 April 2021.[7] Nonetheless, most of the country's business is done in Brazilian Real. The higher expenses of Taslavian economy are with welfare and infrastructure, followed by security, health and the environment. Spending on government manutention are minimal.