Not to be confused with the Lusophone sector.

Brazilian sector or Brazilian community (Portuguese: Setor brasileiro or Comunidade brasileira) is a term used to categorizes micronations which are mostly bounded and are located inside the Brazilian macronational territory. The term was coined by the Treaty of Persenburg, on 23 March 2020. The sector was created as a mostly-derivative (secessionist) division of the mostly-simulationist and historical-modelist (geo-fiction) Lusophone sector, an initiative to gather the derivative lusophone micronationalists in a friendly and broader space. There are currently almost 30 micronations considered active members of the sector. The sector fells under heavy influence of the Conference of Santiago, so far the sector's proper only intermicronational organization.

The term Brazilian sector is commonly used to described micronations within the territory of Brazil that pursue the derivative tradition of micronationalism, this means, a secessionist real establishement of a paralel microstate, in opposition to the modelist-simulationist tradition followed by the Lusophone sector, also called as Lusophonia (Pt: Lusofonia), which emulates pre-existing macronational governments. It was confirmed by the Treaty of Persenburg that the general idea that to be considered member of this sector, the micronation shall have some form of binding with Brazil - in culture, territory or language. The micronation also shall also have its main territory within Brazil. 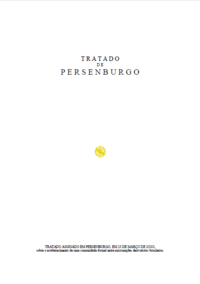 Cover of the Treaty of Persenburg, the historic milestone of the foundation of the Brazilian sector.

The first representation of micronational activity within the Portuguese-speaking micronationalists was the Lusophone Sector or Lusophonia ("Lusofonia", in Portuguese), that surfaced around 1996, being a concept of that should not be understood as referring to the mere set of individual micronations, but in fact to the "medium", the middle of them, the activity between them[1]. In 1992, the Kingdom of Porto Claro[2] appeared as the first internet-based lusophone micronation. By the end of 1997, another lusophone micronation, the Holy Empire of Réunion[3] also grew substantially and even surpassed Porto Claro's force. Réunion was the first lusophone micronation to appeal to sectors outside Lusophonia[4], as it was created as bilingual micronation and remained so until 1999[5]. Founded in 2001, the Free Community of Pasargada[6] was the first significant lusophone project to break traditional paradigm of Lusophonia. Although primely built by Réunian veterans, the new micronation introduced a whole new vision and practise for lusophone sector, in a movement later baptized as the Pasargadan Turn. All lusophone micronations after 2002 got influenced one way or another by Pasargadan Realism - the first exception to the modelist-simulationist tradition of micronationalism and the only accepted example by older micronations.

This sector's peak of activity happened in a period between 2000 and 2005, with a dozen active projects; most of them, with Brazilian micronationalists. By the end of 2006 and from that moment on, the Lusophone sector experienced a decay of activity and enthusiasm. In the decade of 2010, vitality once again gave way to inactivity. By 2020's, few projects based on historic-modelism still exist, most of them considered "one-man nations" and they maintain an extremely hostile stance towards derivative projects, which gave rise to a reaction from Brazilian derivatists, who created the Brazilian sector, then considering Lusophonia as a "closed system", while the Brazilian sector would be a system receptive to foreign micronations and the common practice of micronationalism.

Split from the Lusophone sector

The Lusophone sector of micronationalism is known for and dominated by modelism and simulationism, being the only micronational sector where this segment is the majority. Dissent to this sector are frequently ostracized and harassed and as most micronational sectors do not consider simulationism as micronationalism proper, the Lusophone sector acted in the shadows of the international community, closed in itself. Thus, some derivative micronationalis noted they should organized themselves like the other sectors, based this time not only on language, but also on geography and to establish more active relations with other linguistic and geographic sectors.

The beggining of this cision within Portuguese-speaking micronationalism started in a conversation that happened on 12 March 2020 between the Emperor of Karnia-Ruthenia and the Queen of Manso, the leaders of two of the most successful derivative projects of Brazilian origin at time. Having agreed to assume a more uniform position, they began to issue invitations to active derivatives micronations founded within Brazil with whom they maintained formal contact. The result of this conversation was the Treaty of Persenburg and the creation of the Brazilian Micronationalism group on Facebook. As a result of the cision, most of the members are micronationalists whose projects were recently founded, having acquired the needed experience in simulationist micronationalism, and has so far had contact with the foreign micronational sectors, especially with Czech and English-speaking micronations, respectively the Czech sector and the Anglophone Sector, and were sympathetic to the ideas of creating their projects with based on the Montevideo Convention of 1933. 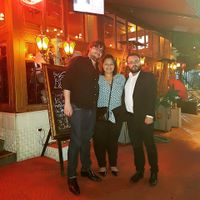 King Rafael of Luna, his wife Queen Letizia and Emperor Oscar I.

Given the secessinost/derivative nature of this sector, micronational meetings are more than encouraged, but desired. In addition to being envisaged as an important part of micronational culture by the Treaty of Persenburg, they reinforce the bonds of friendship between Brazilian micronationalists. Many meetings took place even before the formation of the Brazilian sector, but an emblematic one occurred a few days before its official foundation.

On 8 March 2020, Oscar I met Rafael, King of the Lunes and his wife, Queen Letizia, in São Paulo, Brazil, for a state dinner. In addition to the fact that both are personal friends, they are experienced micronationalists and the conversation moved through several micronational subjects and took a long time in the posture of micronations already established face the new projects that appeared in Brazil; in their vast majority, derivative projects that learned about the current through contact with the foreign micronational community and often, the target of hostility by Portuguese-speaking micronationalists.

Although prior to the emergence of the Brazilian sector, the meeting was important to form Oscar I's conviction to elaborate the separation between derivatists and simulationists micronationalists not through open confrontation, but through diplomatic articulation and cultural incentive. This meeting between the Emperor of Karnia-Ruthenia and the Kings of Luna can be considered as the first micronational meeting of the Brazilian sector.

Since then, for various reasons, including the COVID-19 pandemic, several official summits have been held virtually, although all have been summits of the Conference of Santiago, the main organization in the sector, and not the sector itself. The heads of state of the sector's member states, however, unanimously agreed to schedule a second physical meeting for 2022 in addition to a summit of the Conference of Santiago with other states in the sector as guests. Nevertheless, some informal summits took place, such as the meeting between King Arthur II of Ebenthal with Sultans Omar V and Hassan III of Harram

Of the Brazilian sector's 30 active micronations, 22 are members of the Conference of Santiago, which is the only intermicronational organization born from the sector, whilst other present international organizations are of foreign origin. A few of those micronations keep a wide network of intermicronational relations and diplomacy, such as Karnia-Ruthenia, Ebenthal, Sildavia, Quinta Velha, Lifréia and Nossia, while even fewer keep a tight grip over the Brazilian scene of micronationalism, and even simulationism, such as Mauritia and the Manso, and the rest have some regular established diplomacy. As a result, there has been established a chain of influence, relevance and power within the sector. Considering the range of influence drawn from international respect, relations and participation, micronational activity and stability, Karnia-Ruthenia, Ebenthal, Mauritia and Sildavia can be considered as fully-established great powers within the sector, while Quinta Velha is an emerging power. Braspor and Villa Alicia are middle powers, holding some considerable influence over the sector, although not as much as the aforementioned micronations, and others are regarded as small powers with little influence, a fact that can be due to the youth of most of the Brazilian sector micronations, ultimatelly a result from the split from the Lusophone sector, the decadence of simulationism in Brazil and the recent growth in secessinist/derivative micronationalism. The Kingdom of Manso is widely considered a type of "persona non grata" among most of the sector members following the Santiago-Mansean Conflict, having little to no relations with other Brazilian sector's nations.

Financially, the Brazilian sector is very cohesive, with the Conferential Doubloon being the largest currency in circulation, official in 12 micronations of Brazilian origin (plus 3 others of foreign origin), as well as the only currency proper from the sector which is not fiat, but backed up by bullion. In terms of intersectorial relations, the Brazilian sector relates more to the Anglophone, French, Czech and the MicroWiki nations sectors, having in discussion some kind of deal with the Czech one, and has also related to the Indonesian sector, Valtir Sector and the London Sector. Some Brazilian micronations are often concomitantly members of other micronational sectors as well. The incorporation of Rino Island as a special member of the Conference of Santiago has been the first contact with the Hispanic sector.

Micronations inside the Brazilian sector