Eminia, officially the Kingdom of Eminia (Portuguese: Reino de Emínia) is an enclaved micronation located in South America and Europe, bordering Portugal, France and Brazil. Portuguese is the national and one of the country's two official languages along with French. English is recognized as a diplomatic language. In 2020, the micronation was created proclaiming its independence primarily from France, and then from Portugal and Brazil. Eminian Constitution was formulated based on Portuguese Constitution of 1838 and the Charter of 1830 and the state was defined as a constitutional monarchy.[1]

The country's proper name was inspired by the Visigoth name of the region where it was located. The name Eminia comes from the Latin Aeminium, "elevation" or "height". 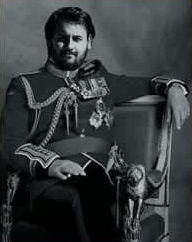 Louis Phillipe, King of the Eminians.

Before its creation, part of the territory was part of the Republic of Portugal, Federative Republic of Brazil and French Republic, comprising territories enclaved in one Portuguese city, a Brazilian city and one French city. On 13 December 2020, Duke Louis Phillipe of Orlheón, founded the kingdom, with Karno-Ruthenian support, after discussions that started on 30 November.[2]

Louis Phillipe of Orlheón, already was an experienced micronationalist, very active within the Lusophone sector, ruling the simulationist Kingdom of Portugal and Algarves. Searching for new challenges and to improve its micronational biography, he left the simulationism behind and establish his own kingdom. He granted a new constitution, and recognize his late father, Duke Victor Manuel of Bregenza as the first King of the Eminians, marking the establishment of the political system as a popular monarchy. His brother, Duke Guilherme of Vizée was made his heir.

On early 2021, Eminia joined the Conference of Santiago and was active within the Brazilian sector, but also have presence in other sectors of micronationalism.

The administrative political division of the Kingdom of Emínia is done through the Law of the National Territory, present in Decree-Law II, of 18 December 2020.

In addition, it defines as Capital of Thieux-en-Saint-Théoton in the Duchy of Orlheón, where the Palace of the Court of São Teotónio, the residence and official seat of His Majesty the King will also be located. To this end, all regions are independent from self-organizing in the manner they democratically choose.

The Kingdom of Eminia is defined as a constitutional monarchy.[3] The monarch, entitled as King, is both head of state with full administrative powers over the government of the nation and his position is hereditary. The King appoints the Chancellor, who acts as a head of government alongside the ministerial cabinet and the parliament. Legislative power is exercised through the Parliament, the national bicameral (Chamber of Pairs and Deputies) legislature, under the sanction or vetoing of the King, which also concentrates the judiciary authority.

The nation is constitutionally indissoluble and rests on the common unity, set on five fundamental principles: sovereignty, citizenship, dignity of human beings, the social values of labor and freedom of enterprise and political pluralism. The branches of government are formally established by the Constitution, slightly centralized into the King. 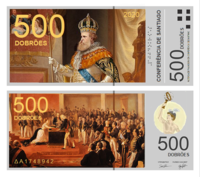 Eminian economy is in a primary state and due to the COVID-19 outbreak, few alternatives were implemented to change it. However, among other micronations, the government are studying the adoption of the Conferential Doubloon through the Conference of Santiago Financial Authority. A major barrier to it by the moment is the observer status Eminia have within the Conference of Santiago. The change of this situation may open the opportunity to adopt this currency and start a program of ecnomical development.

The population of Eminia as recorded in 2021, was that of 6 people of which 2 resides in national territory, with a ratio of men to women of 5:1 and approximately 99% of the population defined as urban. The population is heavily concentrated in the Eastern (4 inhabitants) and Western (2 inhabitants) regions.

50% of the population described themselves as White; 50% as of different ethnicities; there are 02 Asiansin Eminia. European ancestry being dominant nationwide according to the vast majority of all autosomal studies undertaken covering the entire population, 50%.

The kingdom is religiously diverse, encompassing a wide range of beliefs and customs. The kingdom has no official religion, and the government is officially committed to religious secularism, although the monarchical institution did sustain a series of Christian practices and features. Freedom of religion in Eminia is a constitutionally protected right, allowing individuals to assemble and worship without limitation or interference. Despite that, Saint Andrew the Apostle is considered the patron saint of the nation, while Saint Theotonius of Coimbra is considered the patron saint of the royal house.

According to the Constitution, Eminia's two official languages are the Portuguese and French, whilst the Portuguese remains the national language, spoken natively by the entire resident population (90% of the total population), being the language used for business and administrative purposes, and the English plays its role as diplomatic language and the French recognized as a regional language.