Hanseatic and Confederate States of Achsen

Achsen, officially Hanseatic and Confederate States of Achsen (Portuguese: Estados Confederados e Hanseáticos de Achsen) is a South American micronation, an enclave in the city of Ji-Paraná, Brazil. The territory of the kingdom are made up of little plots of land on the banks of Ji-Paraná River. Its capital and most populated city is Kanuweg. Portugues is country national and sole official language, while it holds the English constitutionaly as a diplomatic language. The country is a confederate constitutional elective monarchy.

The territory comprising Achsen was inhabited by several by several tribal nations for at least ten thousand years. From the European colonization of the Americas, in the 16th century, and then on, those lands became part subsequently of the Viceroyalty of Peru, Principality, Kingdom, Empire and Republic of Brazil. Achsen was finally founded in 2020 by Oscar I, Emperor-King of Karnia-Ruthenia for the throne to be delivered to his Mauritiaanse friend Prince Bruno of Woenstein. Following a almost year-long hiatus, the micronational government came to activity by the action of the Arthur II, King of Ebenthal, who became responsible for most of the micronational structuring.

As of December 2020, Achsen emerged in the micronational scenario of the Brazilian Sector, signed the Treaty of Persenburg and officialy applied to join the Conference of Santiago, finally joining it in 5 January 2021.

The name of the confederation comes from a german translation from tupi; Ji-Paraná, the name of the river that cut the micronation means "great river of axes", while Achsen means "axes" in German.

The name was officialy adopted in the Act of Foundation.

In late 2019, Prince Bruno of Woenstein, of the United Provinces of Mauritia, expressed his wish to form a new micronation, on spite of bein an active Mauritiaanse prominent citizen, but for the sake of having the experience of exercise royal power as a monarch. He was prevented of founding a micronation himself, though, as the laws of Mauritia openly forbids regular dual citizenship. In order to help him, Oscar I, Emperor-King of Karnia-Ruthenia, founded Achsen in Prince Bruno's home town as an elective monarchy heavily inspired by the Confederation of the Rhine of the Napoleonic period and the Hanseatic League.[2] The throne of Achsen was to be immediatly delivered to the Mauritiaanse prince, but he was unwilling to accept the Hanseatic crown yet as he did not want to give up his previous citizenship and status in Mauritia, and so the Hanseatic Government of Achsen was formally established with a basic ruling structure although with no personnel, and the micronation went into a long hiatus. 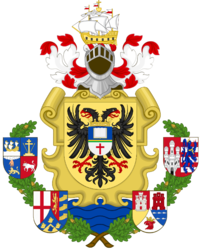 Coat of arms of Achsen before the election of Bruno of Woestein.

In 15 November 2020, King Arthur II of Ebenthal, curious about the micronation, went to ask about it to Oscar I of Karnia-Ruthenia, and expressed to him his interest in the project and made a series of proposals. Coming to terms with Oscar, he handled the full control of the micronation's rein to the Ebenthali sovereign who became responsible for form the country's government, while the Karno-Ruthenian monarch was to press Prince Bruno to accept the Hanseatic crown. In 16 November talks involving the Prince, the Karno-Ruthenian monarch and Lucas, Stadhouder of Mauritia, restarted so that Prince Bruno could be able to retain his Mauritiaanse citizenship and yet be sovereign of a foreign micronation. Envisioning this, in 17 November it was announced that Prince Bruno had been selected to ascend to the throne as King Bruno I of the Hanseatics. Meanwhile, from 15 November to 1 December, the King of Ebenthal assembled an initial provisional government to perform executive, diplomatic and parliamentary duties. In 13 December 2020 the Prince-Elector Lucas Ribeiro was appointed Archchancellor by the Provisional Government. With the delay and uncertainty that Prince Bruno will assume the throne, on 5 January 2021 the Electoral College proclaimed the King of Ebenthal as Regent of Achsen, with retroactive effect to the beginning of his participation in the development of the national government, and the Emperor-King of Karnia-Ruthenia was proclaimed Protector of the Confederation and was granted the noble title of Hanseatic Prince by the Regent.

The lands claimed and technically de facto administrated by Achsen is an enclave, surrounded by the city of Ji-Paraná, that is named after the Ji-Paraná River in the State of Rondônia, Brazil, in the South American continent, below the Equator, it is composed of a bank divided by an afluent, there is the four principalities: Belavista and Uruteich on the eastern bank, to the north and south, respectively; Kleinerbach and Valparaíso on the west bank, to the north and south, respectively.[3]

With a total area of 0.0005 km², 30% of which is made of running water, there is no buildings in Achsen and the territory is administrated from outside. Achsen spans only one time zone, the UTC−4, and has a very simple and plain topography.

Achsen features a tropical monsoon climate (climate type Am) under the Köppen climate classification. The temperatures tend to be relatively consistent throughout the course of the year, with average daily temperatures typically between 25 and 26 degrees Celsius. The dry season is short and covers the months of June, July and August. Achsen is particularly wet from November through April, averaging roughly 200 mm (7.9 in) of rain per month in each of these months.

According to its Act of Foundation, Achsen is a confederation and a constitutional elective monarchy. The highest position, that of King of the Hanseatics and Prince-Primate of the Confederation, corresponds to the Head of State, and is it life-long and elective, being elected by the Prince-Electors, although they can also remove the monarch from the throne by unanimous vote. The Head of Government position falls to the Archchancellor of the Electoral College, who is appointed by the King among the Prince-Electors and in turn appoints the ministerial cabinet and actively rule the nation. Legislative and Executive powers are vested upon the Electoral College, the national parliament made up of individual states with relative autonomy, represented in the house by their reigning Princes.,[4] composed by the ruling Princes of the Confederation's four principalities.

The Hanseatic Confederation rests on the common unity and respective autonomy of four principalities plus the nominal capital. As a confederation, each principality retains much of its sovereignity, excluding financial policy and foreign affairs. The confederation forms essentialy an anocratic regime, mixing features of a aristocracy with a democracy, comparable somewhat to the old Italian crowned republics.

Achsen currently finds itself lacking an official judicial body, and thus judiciary power is vested upon the Electoral College under the King's judgement. The Protector of the Confederation may also assume as a neutral figure to watch over the country's legal affairs when formally asked by the government. The provisional government is tasked to act as a constituent assembly to promulgate the country's constitution.

With a tiny territory and no construction at all, Achsen's territory itself has absolutely no infrastructure, but the state that manages this territory does. The micronation has administrative offices, as well as all types of information technology and has three communication channels.

Claiming territories on the banks of a river, the main means of transport in Achsen is the river, through small motorized boats. However, the state does not organize any form of transport registration, nor does it apply any type of law or regulation in this area, and guarantees free access to its territory. Bicycles and off-road cars and motocycles are also common means of transport used to reach Achsen.

Achsen's population as of December 2020 is that of 10 people, none of which actually resides in Hanseatic territory, with a ratio of men to women of 9:10. The country's population is expected to nominally grow exponentially in the next years, in the form of non-resident citizens. Despite not having permanent residents, Achsen occasionaly receive visitors and it is a point for fishing and river navigation.

Achsen is a secular state, meaning it has not official religion, although the monarchical institution did sustain a series of Christian practices and features. Freedom of religion in Ebenthal is a granted right on which the government has no word as the practise of religion is fully considered a private matter throughout society and the state. Nonetheless, the country is home to a wide range of beliefs, with Catholicism being the predominant religion.

The sole official language of Achsen is the Portuguese, although the English has been fundamentally recognized as a diplomatic language. As of December 2020, most of the Hanseatic citizens (70%) are bilingual, speaking Portuguese natively and English as a second language. Spanish, German and French are also often spoken by Hanseatics. The Brazilian Sign Language, more commonly known by its Portuguese acronym LIBRAS, is nationally recognized as the country's language for deaf people.

Brazilian Portuguese, spoken in Achsen, has had its own development, similar to 16th-century Central and Southern dialects of European Portuguese, but greatly influence by indigenous languages such as the Tupi, whose words give name to several Hanseatic points of interest, orders, institutions and places, sometimes translated to German, as the micronation is inspired by both cultures.

The Hanseatic culture is heavily based in the Rondoniense and German culture. Several characteristics of the micronation purposefully mix features of the cultures already mentioned, for example, in the etymology of two of the principalities and the capital, which are German translations of words originally in the indigenous Tupi language. The country's own organization is largely based on the former German states of the Confederation of the Rhine and the Hanseatic League.