From MicroWiki, the free micronational encyclopædia
(Redirected from Braspor)
Jump to navigation Jump to search

Braspor, officially the Kingdom of Braspor (Portuguese: Reino de Braspor) is an enclaved Brazilian micronation located in South America, bordering São Paulo, Brazil. Founded on 2 September 2018 as a derivatist micronation, it counts with an active population of at least 22 citizens by september 2022. The capital Braspor, a city-state is the only and most populous city in the country. It has Portuguese as native language, while English is widely considered a working and diplomatic language. Deeply inspired by the culture of Brazil, Braspor is a micronation commited to the Treaty of Persenburg and the Protocol of Goetha and is a state-member of the Conference of Santiago.

The Kingdom is an absolute monarchy and all powers are concentrated in the figure of the King. Isolated until 2020, the Braspor emerged in the micronational scenario as one of the constituents of the Brazilian Sector. Through this, is a South American regional power among micronations and a small power within the Brazilian sector and can be considered also a small in some global intermicronational affairs. Its economy, mainly based on services and basic industry, is based on the Conferential Doubloon and are in their initial stage of development.

Famous for its sporting initiatives, it was the first organization in Latin America to hold a non-virtual sports event.

The etymology of the word Braspor braspor (pronounced "Brespor") are the initials of the founder's last name. BRAga & PORto.

Braspor started when its founder Matheus of Souza Marques, indignant with the rising waves of crime and corruption in Brazil, researching things about small countries like Monaco, Vatican and Palau, and found articles about micronations. Among these articles he, found about Sealand, it was when he became interested and started to see about other micronations, as was the case of the Republic of Kugelmugel and Kingdom of Talossa, among others. Then, he founded his own micronationan, on 2 September 2018.

Braspor is composed by a house with just over 214 square meters. The micronation is surrounded by the city of São Paulo, located in São Paulo, Brazil. It is urbanized, has a tropical climate of altitude, with average annual temperature between 17 and 21 degrees Celsius and sporadic frost in some places during the winter. The surroundings are largely covered by parts of the Atlantic Forest. 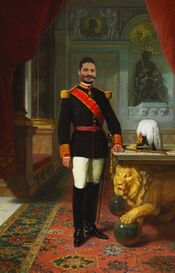 Braspor is an absolute monarchy in which the King holds a strong political and institutional power, concentrating the executive power exercised by decrees. The Constitution was granted throughout its foundation in September 2018, and underwent some modifications in early 2019. Its authority over national affairs is shared with a cabinet of ministers, who in turn are appointed every year through applications open to the general public, what means that people from other micronations and even non-micronationalists can become ministers. The current ruling dynasty is the Casa de Souza Marques, a recently nobilited family, who proclaimed the establishment of the kingdom and occupied its throne since 2018. the kingdom is an absolutist monarchy, the ministers take an idea and send it to the king, the king makes all the decisions in case of his absence the second-in-command is the queen. the queen has the same functions as the king exercising the functions

Braspor does not have a strong defense force, but sources report that it has a small air force formed by drones, an infantry in charge of 4 volunteers from the population, which are responsible to operate the drones and act on commemorative dates such as the Independence Day. Sources report that the probability of starting a space program is being studied. at the end of September 2021, the National Guard was founded, which will be responsible for defending the nation in case of external threat. It currently has 4 active soldiers.

Active in the Brazilian sector, the kingdom is rapidly evolving in the diplomatic area, having gained much prominence by ratifying the Treaty of Persenburg, the Protocol of Goetha and the Convention of Mauritsstad, as well as becoming a member of the Conference of Santiago.

The kingdom's economy is in a primary state, although it has some means of establishing the economy. Without arable land, flourishing industry or an abundance of natural resources, Braspor currently sells operational feed and online tourism service, also selling agricultural products such as coffee, corn and beans, and textile products such as flags and personalized shirts, brooches and stamps. The economy had a great fall due to the COVID-19 outbreak, and other alternatives are being studied to return the situation and increase the GDP. Braspor, although use the Brazilian Real as its de facto currency, adopted on 27 July 2020 the Conferential Doubloon through the Conference of Santiago Financial Authority.

Braspor does not have any official religion, but the predominant religion is Protestantism, with practice in more than 80% of the population.

The official language of the kingdom is the Portuguese language, being spoken by 100% of its population. English and Spanish are considered diplomatic languages. 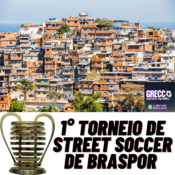 Propaganda of the First Street Soccer Tournament of Braspor, 2021.

Braspor has a culture still in its early stages, most of which comes from states like São Paulo and Bahia, due the proximity to Brazilian territory. One of the works cherished as a major piece of art of Braspor, is an oil on the canvas of the first King of Braspor, given by the Karno-Ruthenian Monarchy on late 2020. The core culture of the kingdom is derived from Portuguese culture and Brazilian culture. Among other influences, the Portuguese introduced the language, manners and legends, while Brazilian culture, strongly influenced by African, indigenous and non-Portuguese European cultures and traditions, introduced played a considerable role, mainly in cuisine and music, shared with the larger surrounding country.

The most popular sport in Braspor is football. The Braspondese people is usually a fan of several sports, among which he can stand out soccer, futsal, basketball, volleyball, handball, swimming and several others, composing a very important aspect of the life of Braspor. However, the only national team Braspor counts with is on futsal, although it has been speculated the creation of an online team for eSports. In any case, Braspor made history by creating the first non-virtual sports event held by a micronation in Latin America, the First Street Soccer Tournament of Braspor, with some adaptations and reductions due to the COVID-19 pandemic.[1][2]