From MicroWiki, the free micronational encyclopædia
(Redirected from Micronationalism in Australia)
Jump to navigation Jump to search

Large developments in Australian and New Zealand micronationalism occurred in the final three decades of the 20th century, and following the rise of the Internet in the late 90s and early 2000s, Australian micronations became increasingly more prominent and gained more interest from the media.

Developments in the final three decades of the 20th century

The Principality of Hutt River

Leonard Casley (28 August 1925 – 13 February 2019)[3] declared the Principality of Hutt River an independent province in 1970 in response to a dispute with the government of Western Australia over what the Casley family considered draconian wheat production quotas. The Casley farm had around 4,000 hectares (9,900 acres) of wheat ready to harvest when the quotas were issued, which allowed Casley to sell only 1,647 bushels or approximately 40 hectares (99 acres).[4] Initially, the five families who owned farms at Hutt River banded together to fight the quota,[citation needed] and Casley lodged a protest with the Governor of Western Australia, Sir Douglas Kendrew. The Governor did not assist. In December 2019 the principality announced that it would close its borders and cease its external government services as of 31 January 2020, until further notice.[5] On 3 August 2020 the principality formally dissolved.[6]

In 1976 the Province of Bumbunga was created on a rural property near Snowtown, South Australia, by an eccentric British monarchist Alec Brackstone, a British monkey trainer, uranium prospector, and postmaster. Brackstone was later arrested in 1999 and charged with possession of illegal firearms. His assertion of diplomatic immunity due to his status as Bumbunga's sovereign was unsuccessful but, according to Brackstone, the charges were ultimately dropped nevertheless. In 2018 Brackstone was interviewed at his residence in Clare, South Australia, still claiming to be Governor of the province which had been inactive since approximately 2000.[7]

The Grand Duchy of Avram is a non-territorial micronation founded in the early 1980s by Tasmanian John Charlton Rudge,[12] who styles himself the "Grand Duke of Avram". It is based in Australia.

The Empire of Atlantium was established in 1981 by three Sydney teenagers – George Cruickshank, Geoffrey John Duggan and Claire Marie Coulter (née Duggan). The three claimed a 10 square metres (110 sq ft) "provisional territory" in the southern suburb of Narwee as Atlantium's first capital, and declared Cruickshank to be Sovereign Head of state, with the title "Emperor George II".[13][14] However, by 1990, when the original group members had graduated from university and moved away, the group ceased to be active. In 1999 Cruickshank purchased an apartment in the inner Sydney suburb of Potts Point, and soon after revived Atlantium, launching a website, which was instrumental in attracting new members. The 61 square metres (660 sq ft) apartment, known as the Imperium Proper, became the second capital of Atlantium.[14] Concordia became the third capital of Atlantium on 12 January 2008, when the rural 0.76 square kilometres (0.29 sq mi) Province of Aurora, approximately 350 kilometres (220 mi) southwest of Sydney, was created. The Atlantium website describes Aurora as Atlantium's "global administrative capital, ceremonial focal point and spiritual homeland".[15]

The Principality of Marlborough was a short-lived micronation in 1993 whose creator declared his farm an independent country to try to avoid eviction after bankruptcy. He was evicted less than a week later by police, was later prosecuted and has since abandoned any claim of independence.[16]

In 2003, a family of Australian residents could no longer afford to pay taxes, and after litigation over a mortgage and being Inspired by the Principality of Hutt River, they did legal research and came to the conclusion that forming a country would be completely legal under Australian law, and they thus declared the Principality of Snake Hill independent on 2 September 2003.[17] In late February 2011, a judge of the Supreme Court of Australia dismissed the Snake Hillers' argument that the bank's actions were outside the jurisdiction of the court, and that it was a matter of international law and must be referred to the High Court of Australia or the International Court of Justice.[18]

In 2004, Paul Delprat claimed to secede from the Sydney suburb of Mosman and developed his own micronation the Principality of Wy in response to a lengthy dispute with the local council government over the construction of a driveway to his property. After 20 years of seeking planning permission, he lost his appeal in 2013.[19]

Furthermore, the Gay and Lesbian Kingdom of the Coral Sea Islands was a micronation established as a symbolic political protest by a group of gay rights activists based in Australia. Declared in 2004 in response to the Australian government's refusal to recognise same-sex marriages, it was founded on Australia's external overseas Territory of the Coral Sea Islands, a group of uninhabited islets east of the Great Barrier Reef.[20] The Kingdom was dissolved on 17 November 2017 following the 'Yes' vote in the Australian Marriage Law Postal Survey legalising gay marriage.[21] 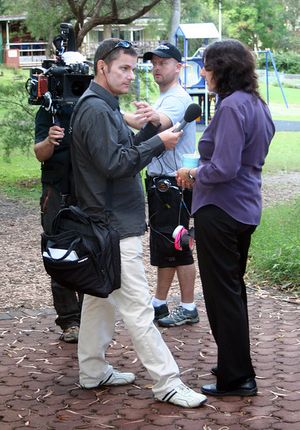 The Murrawarri Republic is a micronation that declared its independence from Australia in 2013, claiming territory straddling the border of the states of New South Wales and Queensland. The territory is the traditional homeland of the Murrawarri people, an Aboriginal nation, but the population now comprises mostly non-Indigenous Australians.[30][31]

Similarly, the Sovereign Yidindji Government is an Aboriginal Australian micronation that is part of the Australian Aboriginal Sovereignty. Led by Murrumu Walubara Yidindji, members of the Yidindji nation renounced legal ties with Australia in 2014. The land they claim lies in the state of Queensland and stretches "south of Port Douglas, through Cairns, inland across the Atherton Tablelands and 80 kilometres (50 mi) out to sea".[32] The chief minister is Gudju Gudju Gimuybara, while Murrumu is foreign affairs and trade minister.[33] The Yidindji government is hoping to enter into a memorandum of understanding with the Commonwealth of Australia. It is also "reaching out to countries like Russia and Venezuela to establish diplomatic relations".[32]

The Micronational Community of Australia, currently the largest micronational organization in the country, was established on the 24th of April, 2021.