Urabba Parks, officially Urabba Parks Proprietary Limited, is an Australian charity that owns 4 Urabba Street, Rankins Springs, New South Wales (listed in some maps as Urabba Street Reserve and Urabba Parks Pty Ltd - Rankins Springs campus). The charity was incorporated on 3 July 2012, and established itself as a jurisdiction with the adoption of the current Constitution on 5 March 2021. With an area of 1,310 square metres[1], the fully autonomous and de facto sovereign Imvrassian Hegemony is affiliated with the Landcare movement and has the overarching purpose "to advance humanity and the environment together"[Constitution 1] with charitable democracy.

Although Urabba Parks is open 24 hours a day, park users are advised not to loiter in or around the micronation after dark or in the early hours of the morning as to avoid disturbing local residents.

Urabba refers to the name of the street where the micronation is situated, and is a variation of the name of a nearby locality of Eurabba, which is a Wiradjuri word meaning "a boggy creek".[2]

Parks refers to the operating model of "parks", which could include open spaces but also built environments for the purpose of providing charitable services such as health and education delivered by associated entities.

Proprietary (or Pty) refers to the fact Urabba Parks is a proprietary (private) company limited by shares under Australian company law. Although most charitable companies do not issue shares, and are incorporated as companies limited by guarantee, the Constitution of Urabba Parks provides for the surplus assets usually distributed among shareholders to be distributed to charities chosen by those shareholders (with the amount being in proportion to the shares held).

Limited (or Ltd) refers to the fact that under Australian company law, the members of Urabba Parks are not liable for its debts if the micronation winds up and is unable to pay them.

The Founder of Urabba Parks, D.J. Racovolis, purchased what is now Urabba Parks in 2011, and in early 2012 decided to pursue what is now known in Urabba Parks as 'charitable democracy', having a charity nation delivering benefit to the wider community but also having a unique identity. Urabba Parks Pty Ltd was officially incorporated as a company on 3 July 2012, and was registered as a charity with the Australian Charities and Not-for-profits Commission on 3 December 2012[3].

Integration into the Empire of Imvrassia

On 23 June 2022, Aggelos I, Emperor of Imvrassia declared Urabba Parks an Hegemony of the Empire of Imvrassia. Mr Racovolis now holds the honorary title of Sebastokrator of Urabba Parks, in addition the substantive title Enactor. The affiliation to Imvrassia is intended to advance the Hellenic character of Urabba Parks.

On 3 July 2022, Urabba Parks celebrated its 10th anniversary as an incorporated company. 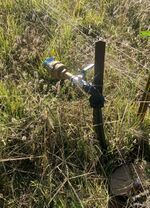 Urabba Parks is is located in Rankins Springs, which is located in the Murrumbidgee Irrigation Area of the Riverina bioregion. The area surrounding Rankins Springs is within the Lachlan Plains subregion of the extensive Cobar Peneplain Bioregion (comprising 9.2 percent of the territory of New South Wales)[4].

Rankins Springs is a landlocked village approximately 219 metres above sea level.[5] There is a slight gradient in Urabba Parks, with the UP1 range fronting Urabba Street being of slightly higher elevation than the UP4 range which fronts the unnamed lane running parallel with Urabba Street.

The Australian Bureau of Meteorology classifies the Riverina bioregion in which Urabba Parks sits in the Hot Dry Zone (with cooler winters) climatic zone. Places in this zone can be very hot in the summer months while in the winter, nights can be considerably cold with cool to mild days.[6] Under the Köppen climate classification, the Riverina predominantly falls in the hot-summer Mediterranean climate (Csa) zone[7][8]. Mean daily maximum temperatures in Rankins Springs range from 37 °C (98.6 °F) in January to 14 °C (57.2 °F) in June.[9] Rankins Springs has an annual rainfall of 452 millimetres.[10]

In October 2021, Carrathool Shire Council installed a potable water supply, known as the Urabbaparcensian Water Board in UP4, alongside the unnamed lane running parallel with Urabba Street.

Urabba Parks is divided into 4 ranges. A range is a geographical division that functions in a similar manner to a postcode zone, and is not necessarily a jurisdictional or administrative division.

Urabba Parks is governed by a Constitution, which establishes it as a "non-state jurisdiction" with its own legal system, a Parliament, Executive Government and Judicature. The jurisdiction is created by the agreement of jurisdiction, which is contained in subsection 7(2) of the Constitution[Constitution 4], which provides that each party agrees to appear before judicial bodies in the case of "answering any charge of an offence against the law of Urabba Parks, or any appeals from any judgment, order or sanction so given in respect of a proceeding", and to public arbitration of matters arising under the law of Urabba Parks.

Daniel Racovolis reigns as Enactor of Urabba Parks by virtue of holding foundation in Urabba Parks through his holding company, D.J. Racovolis Services Pty Ltd. The Enactorship is, under the law of Urabba Parks, known as the Management, making it the equivalent of the Crown in Commonwealth legal systems. The Enactor's designated representative in Urabba Parks by the Manager-General at the corporate level and by the managers at the divisional level, who by convention act on the advice of the ministers. Thus, in practice the Manager-General acts as a legal figurehead for the actions of the Park Minister and the Proprietary Council.

The directors of Urabba Parks include:

The Parliament has the power to make laws in many areas such as revenue items (membership fees, income levies from associated entities), external affairs, conduct of member proceedings and the management of entities formed within Urabba Parks[Constitution 9].

The Executive Government of Urabba Parks consists numerous components[Constitution 10], including:

Each person who enters Urabba Parks or becomes a member is subject to the agreement of jurisdiction contained in the Constitution[Constitution 4], which requires a person to appear when required as an accused or to give evidence to judicial bodies when required.

In addition, Enactor Danny Racovolis, who holds land in Urabba Parks through holding company D.J. Racovolis Services Pty Ltd, is willing to declare regions of Urabba Parks as integral parts of other micronations, on the condition the micronation accepts the federal governance structure in Urabba Parks.

The Urabba Parks Operations Network (UPON), which includes branches of the Urabbaparcensian Defence Service (UDS) and private services, contributes to the civil defence of Australia and its regional and global allies through environmental protection and rejuvenation, research and safety. UPON has designated branches in land, water, air, space and cyber spheres. The responsible minister for the UDS is the Minister of Operations who administers the Department of Operations which along with the UDS forms the Urabbaparcensian Defence Organisation.

Urabba Parks is limited by shares, meaning that the liability of members is limited to the amount (if any) unpaid on their shares. Most shares are issued 'paid up' with no such liability. This is in contrast with most charitable companies which are limited by guarantee and do not have a share structure.

In the capital structure of Urabba Parks, there are four types of membership:

Urabba Parks is required to distribute its net assets after the payment of debts (including those related to service membership) to charities upon winding-up, and not pay any dividends. However upon dissolution the funds are divided among recipient charities nominated by ordinary members in proportion to their shareholding, subject to the special rights of patron members. In addition, there is a system in Urabba Parks, known as charity distribution, where by Urabba Parks may declare an amount as a charity distribution, apply it to giving accounts and giving pools allocated to members. Funds in giving accounts and giving pools are then paid to charities nominated by the members.

For the purposes of the law of Imvrassia, the population of the Hegemony of Urabba Parks consists of all the Imvrassian Citizens with belonger status in the Hegemony. As at 26 June 2022, there is only one such person, being Danny Racovolis, the Enactor.

Reflecting the intentions of the Founder of Urabba Parks, the culture of Urabba Parks is based in Hellenism. The national colours of Urabba Parks are green and gold to represent the Australian influence and the house mark, the Urabbaparcensian Cross, is a is a monogrammatic cross or Staurogram (which is a typographic ligature composed of a superposition of the Greek letters tau (Τ) and rho (Ρ)), with the 'T' joined by a demi-circle. The colours and house mark make up the Flag of Urabba Parks, which was adopted along with the Constitution of Urabba Parks on 5 March 2021.

1. ^ Australian English is a de facto official language due to its widespread use.
2. ^ There is no official all-numeric date format for Urabba Parks, but government recommendations generally follow Australian date and time notation.