From MicroWiki, the micronational encyclopædia
(Redirected from Pasargada)
Jump to navigation Jump to search

The Free Community of Pasargada, or simply Pasargada, is a lusophone micronation founded in April 7, 2001. It is considered one of the most relevant micronations of Lusophone Sector ever, with a large population, well-organized structure and tenacious activity continuously since foundation.

Within micronationalism, Pasargada is considered to be nationhood-style project, that is to say, the project seeks gradual construction of a small-scale society, a real exercise of social and cultural participation with a smaller number of citizens (by August 15, 2009, Pasargada counts 76 active citizens), sharing common ideals, values and histories. Indeed, some sources classify Pasargada in the "non-territorial nomadic subcultures" sub-group, likewise Formori Community.

From 2001 to 2009, Pasargada has been giving a solid and known contribution to micronationalism and micropatriology, strikingly through Pasargadan Turn. Among lusophones, by instance, it has created the alternative movement of micronational realism. Actually, all lusophone micronationry could be explained by two vectors: simulationism of Réunion and Porto Claro, and Pasargadan realism. 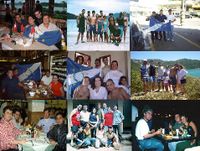 Two inherent and emblematic aspects of Pasargada are the administrative Cantons and political Houses. Both are part of an original and decentralized cultural and political system that makes Pasargada unique in micronationalism. Presently, there are five autonomous Cantons: Efaté, Icária, Cenit, Sloborskaia and Sparta; and three active Houses: Pasargadan Heart, Federalist Alliance and Social Democracy.

Pasargada's population is mostly based in Brazil and it could be considered part of Brazilian micronations and Lusophone sector. However, by 2009, the Community also counts with citizens from Peru, Portugal, Cabo Verde, Argentina and Belgium.

Pasargada also is the land of famous lusophone newspapers, such as the People's Tribune, Impressions, The Socioculturalist, Pasargadan Pulpit and Pravda.

The nation's founding fathers were Bruno Cava, Igor Ravasco, José Luiz Borrás, Leonardo Carrion, Luciana Andrade, Rafael Figueira, Sérgio Schüller and Vítor de Bourg. That time, all eight were experienced micronationalists from Holy Empire of Réunion. Réunion influence was strong in the beginning, and until today, the nation of Claudio de Castro remains firmly the main ally of the Community.

In one way or another, each of those nations has a singular relationship with the history of the Free Community. The new commonwealth immediately matches the Réunian Commonwealth, so far the biggest micronational coalition.

With serious work in diplomacy, the Free Community has established itself a wide reputation in every sector and micronational arena. As a matter of fact, it has established diplomatic relations with more than 200 micronations from every linguistic group and ideological path (statehood, nationhood, simulation, political exercise etc).

In the Pasargadan regime, foreign affairs are handled by the Chancellery, headed by an elected officer or the Chancellor (head of state), for a six-month mandate. The Chancellor leads Pasargadan Diplomatic Corps, which exerts multiple positions in the vice-chancelleries, diplomatic missions and intermicronational organizations. 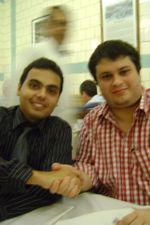 In November 2001, the Free Community, side by side with Republic of Mallorca, innaugurated the famous Lusophone Commonwealth. Later, the Independent Nation of Avalon signed up with the project. The main goal of this innovative Commonwealth was to unite lusophone micronations in a sort of European Union within micronationalism. Pasargada has also participated in the Unity Comity, an initiative among other League of Micronations issues, in order to bring together several micronational projects.

Along its history, some serious micronations have joined Pasargada: the Republic of Sloborskaia, in 2003, separated in 2004 and went dormant in 2006. In 2008, a few former Sloborskaians, together with some Invernesians chose to dismantle Inverness and reestablish the culture of the former Sloborskaia, and enrolled the same Sloborskaia as before as current fourth canton; the Independent Nation of Avalon, as a protectorate, in 2004; and finally the noble Democratic Diarchy of Sparta, in 2009, as the fifth canton.

Pasargada doesn't envisage to overpower any current nation-state or its establishment; not in this sense. The nation believes in alternate forms of community for the XXI century, once "Internet has given humanity many new dreams of discoveries and social creation". As a consequence, Pasargada has declared itself oriented to nationhood. True, it is a member of League of Secessionist States. Notwithstanding, the Pasargadan foreign affairs office has been promoting a new name for that august organization: the "League of Sovereign States". 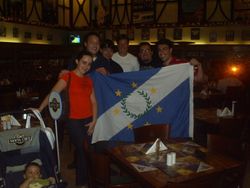 Some of Pasargadan official policies:

On Territory. Pasargada considers micronational territory to be composed of websites, domains, wikis, e-mail groups and whatever communication interfaces are under the control of a micronational government. PAS respects all others views, though.

On Recognition. Pasargada isn't overly selective, demanding six factors to be accomplished by the nation-candidates: activity, stability, population, territory, claim to sovereignty, and respect to human rights and diplomatic protocols.

On War. Pasargada rejects the concept as entirely unsuitable to micronationalism. Pasargadan policy is to consider every casus belli to be more of national and international crime and, thus, to be denounced to empowered authorities.

On Seriousness and Serious Micronationalism. Pasargada is a lot more than a game, it is a democratic territory where people from many places and beliefs discuss and try solutions for a more human and fair society. Although it is the real thing, with all its problems, there cannot be denied a component of utopia. More than a RPG or a mere hobby, Pasargada is a movement of life and ideas, of citizenship learning. In Pasargada, there are no fictitious characters that someone might play. You are yourself and nothing less. It is all about human real relations, all about people --- not a practical joke.

Pasargada fully endorses the Universal Declaration of Human Rights (UN, 1948), the Interamerican Convention on Human Rights - Costa Rica Pact (OEA, 1969), the Charters of LoSS, GUM, OMU and Cimeira and historical conventions and protocols of Lusophone Commonwealth, in which the nation took part from 2001 to 2005. 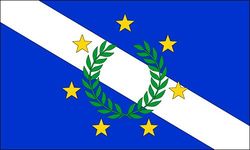 The Belissima
designed by Carlos Fraga in 2001

The outstanding Pasargadan flag, the "Belissima", was elected in 2003, within more than 40 candidates, as the most beautiful flag of lusophone sector. Blue expresses liberty and white equity. The golden stars represent the seven native Cantons: Efaté, Épi, Aniwa, Macunaíma, Santa Maria, Espírito Santu and Inverness. 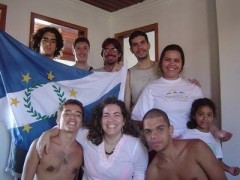 In particular, the laurels symbolize known Pasargadan intelligentsia, as many research institutes have made fame in the Community, such as FUPEP (Political Studies), INPAM (Micropatriology) and SHMB (Historical Society).

The actual Belissima, in fabric, was manufactured in July 2001, and is solemnly carried in all traditional Annual Pasargadan Meetings and other micronational occasions. Many little flags were also produced for personal usage.

Although there aren't seven cantons anymore (today Pasargada has five), the nation preferred to maintain traditional design no matter how many cantons exist at the time.

Head of State: His Excellency, Chancellor André Cyranka (acyranka@uol.com.br), since May 2009

Armed Forces: None. Pasargada has a very busy Intelligence Agency, the ARMADA 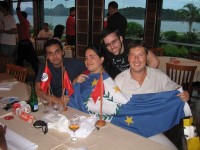 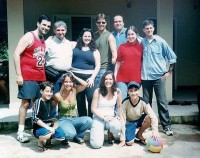 President of Sloborskaia and Leader of Opposition Renan Halphen (s. 2006)

Micropatriologist and Dean of UniCM McMillan Hunt (s. 2008; publisher of the Angry Bull)