The Socialist Republic of Sloborskaia, or Sloborskaia, or sweetly Slok, was founded as a micronation in 2003 by three lusophone micronationalists: Felipe Aron, Victor Martins and Erick Martins. In the beginning, Sloborskaia had a lot of fictitious aspects and could be classified as "just for fun" experiment. However, due to population growth and new diplomatic contacts, it has decisively shifted to a more serious project.

In late 2003, already counting 20 active citizens, Sloborskaia decided to abolish "virtualisms" and adopted micronational realism. As a consequence, the republic has got closer to Free Community of Pasargada, leading nation amongst lusophones; and, in January 2004, Sloborskaia was finally incorporated as the fourth Canton. Soon, Sloborskaians grouped themselves in a new Pasargadan House, the Federalist Alliance, which reached power in the next months headed by its everlasting political leader Felipe Aron.

Separatist groups appeared for the first time in February 2004, and once in a while Pasargadan authorities have had to take concrete actions in order to repel rebel sentiments. Eventually, in August 2005, as a result of a major civilian unrest, Sloborskaia became the first Pasargadan Canton to secede, turning again into a fully independent micronation. Then, later that year, Sloborskaia merged with Republic of Bervania, forming lusophone Union of Soviet Socialist Republics (URSS). This project, notwithstanding several efforts, ultimately failed in the end of 2006, decayed to dormant status.

In September 2008, Sloborskaia was again enrolled as Pasargadan Canton. This time, an internal plebiscite decided for an unseen "substitution" of Cantons. While Inverness, a primeval division of Pasargada, was declared dormant. Therefore, the Republic of Sloborskaia was restored by old Sloborskaians and former Invernesians.

In June 2009, Sloborskaian citizens approved new Statute of the Republic. 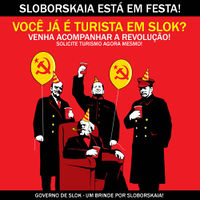 Due to an internal legitimancy crisis between two political groups, in July 2009 Sloborskaia became the first Pasargadan Canton to suffer an intervention from central Government, after procedural approval by the Parliament (unanimous vote). The in-duty Premier José Luiz Borrás appointed Deputy Prime-Minister Silvia Soares to handle Canton pacification and organization of new elections.

Furthermore, In August 2009, the Parliament of Pasargada approved Historical Heritage Act 2009, which established officially that the Canton of Sloborskaia is the same micronational entity created in 2003 and continued interrupt until now. Thus, all cultural aspects of Sloborskaia should be henceforth defended as Pasargadan national wealth.

In the same month, SDP affiliate politician Renan Halphen was elected with six votes 'for', as the new President of the Socialist Republic, being empowered in August 30, 2009.