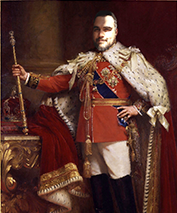 Sparta, officially the Democratic Diarchy of Sparta (Portuguese: Diarquia Democrática de Esparta), is a non-territorial micronation from the Lusophone sector. Although a Constitutional monarchy, Sparta proclaims themselves as a Diarchy, that is to say, Sparta should be ruled simultaneously by two kings, to this day Mariano of Ágide is the sole monarch. Their government describes themselves as hybrid of Realistic School and Simulationism.

From March 2009 to August 2011, Sparta has been an active member nation of the Free Community of Pasargada. The union was concluded after detailed Pasargadan formalities and protocols (plebiscite, parliamentary approval and diplomatic treaty) were fulfilled, giving nonetheless Sparta autonomy and reasonable independence. Sparta takes part of the Institute of Monarchical Traditions, based in Pasargada. Moreover, in July 2009, the Diarchy has earned a full voting chair in the Micronational Monarchies Organization (OML), together with another Pasargadan canton, the Principality of Efaté.

Since 2 September 2011, the Diarchy is independent of the Free Community of Pasargada,[1] keeping Mariano as King.