Thomas Frank Falesnik (Czech: Tomáš František Falešník; Nissiian: Naemal Pxal-den; born Tomáš Falešník on 14 January 2004) is a Czech Gymnazist politician who served as the third, tenth and twenty-first president of the Gymnasium State. He is also involved in number of other micronations, most notably Mekniy or Posaf. Tomáš has served as the MOF Advertisement Commissioner since 31 August 2018 and became the MOF President on 22 August 2021, and was the Secretary for Statical Research for the Grand Unified Micronational between 7 July 2019 and 11 January 2020 as well as Secretary for Diplomacy and Recruitment between 2 January and 11 July 2021. Tomáš is a member of the Social Liberals in the Gymnasium State.

Tomáš was born in Prague on 14 January 2004. His family soon moved to Sušice, where he has lived since. He's studying at the Sušice gymnasium.

Tomáš was the key person in the declaration of independence of the Socialist State of Gymnasium and one of the first four citizens. He later wrote the Constitution, basing it on the Provisonal Constitution by Joel Novotný. He was elected the second Premier and the third President of the Gymnasium State, later re-elected as the tenth and twenty-first President and fourteenth and twenty-third Premier. He was also the author of several proposed and adopted laws and acts of the micronation. Originally being the Minister of Foreign Affairs until the position's abolition, he became a leading figure in representing the Gymnasium State abroad, though he faced occasional criticism for abusing powers he no longer posessed.

Tomáš has become a citizen of Posaf on 17 August 2018, and joined the New Democrats Party. He has been elected as a Commoner for NDP on 16 January 2019, and multiple times later, most recently on 15 May 2020. He was originally considered for a ministry under one of the governments of 2019, but would ultimately never hold any government position. Tomáš has served as the Premier of Nievenorte between 16 September 2019 and 15 May 2020, when he was defeated by Zabëlle Skye, but still retained a seat in the Nievenorte Assembly. In 2020, Tomáš supported the revitalisation plans for Posaf by the provisional government, including the Sentallares proposal, but after these initiatives failed, decided to declare the Provisional Administration of Duck Islands on 21 August 2021, assuming control over the county until the situation in Posaf would be resolved.

Tomáš has become a citizen of Mekniy on 11 March 2018, but has not participated very much in the micronation until 13 March 2020, when he was appointed as the Minister of Foreign Affairs. Before the 2020 Senate elections, he formed a new party, the Independents, which became one of the three victorious parties, and Tomáš was then appointed Deputy Governor of the Senate in the Big Coalition. Despite that, when the Senate Governor Ara-den resigned, the Meehk decided to call an early election. Supporting previous agreements with the Conservatives, Tomáš declined Hab-den's offers for government positions, instead becoming the leader of the opposition. After Hab-den was dismissed, Tomáš declined to lead the new government, supporting Siwil Ara-den instead and becoming both the Minister of Foreign Affairs and Deputy Governor of Senate again. After the second early election in 2021, which was won by the Green Party, he was appointed by the Meehk to form the new government, as all Green Party members declined to run the government.

Tomáš became a citizen of Mercia on 23 March 2020, serving as a MP since 24 March and Deputy Minister of State in the provisional government since 25 March, until both the Parliament and cabinet were dissolved on 4 April. He has also helped in several smaller micronations, usually of the Czech sector, but did not become citizen of any of them despite being offered several positions in those micronations. The only exception was the Rednecks Republic, where he was active in Vote Correct Bloc, a satirical political party. After it's dissolution, Tomáš remained an independent politician in the micronation until its merger with Krlesia, where he founded another satirical party, the Party of English Socialism, and was elected an MP. He was named Crown Prince of Čechsexia by Emperor Terry on 28 November 2020, overseeing an attempt to form an autonomous dependency for Czech speaking Essexian, retaining the title until 8 October 2021, when Čechsexia was dissolved by the new Essexian military government. Tomáš also became a member of the Micropolitan Club and Lounge VI on 9 December 2019 and Micropolitan@Discord on 25 July 2020. Tomáš was made MicroWiki patroller on 26 January 2020, serving until the position was abolished, and a wiki admin for the Czech section of wiki on 24 June 2020.

Tomáš was appointed as a delegate of the Gymnasium State in all three organizations the micronation is a member of. He assumed the position of the Advertisement Commissioner in the Micronational Olympic Federation on 31 August 2018 and Vice-President for Athletic Events on 7 January 2021, before becoming the MOF President on 22 August 2021 and overseeing the 2021 MOF Games. He also served as the Secretary of Statistical Research in the Grand Unified Micronational between 7 July 2019 and 1 January 2020, and than as ad-interim Secretary until Otto Gillespie Birch assumed the position on 11 January, and as Secretary for Diplomacy and Recruitment fro, 2 January to 11 July 2021. He was also elected the Secretary of UMCE on 28 February 2020 and reelected on 1 February 2021, bringing reforms to the organisation, most notably replacing the Treaty of Establishment of UMCE with the Treaty of Functioning of UMCE. 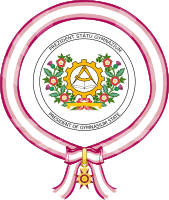 Generic arms of the President of the Gymnasium State as Grand Cordon of the Order of the Foxtail Orchid, Vishwamitra.