There is no official position of what the name of the country means. Nevertheless, each word of the constituent parts is translatable. In the first years of the republic's functioning, there were five provinces (federal states) from which the name was derived. The government recommends that the abbreviation "GSMLL" be used in informal contacts. 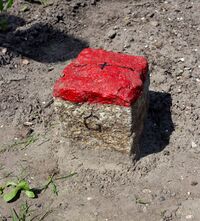 Boundary stone between GSMLL and Poland

The first documents mentioning the existence of the Republic of Upper Schwartz Morgen Lorgen Land date back to 2009. Foundation Day is a symbolic date, the exact date when the micronation was founded is uncertain. From the beginning of the Republic's existence, it has had a constitution, in a form of an encyclopedia with the most important facts about the micronation. After a period of inactivity, in 2012, the legal system of the Republic began to develop. Two years later, a new constitution was established to define the state system. The first website was also created. The first 7 years of Upper Schwartz Morgen Lorgen Land existence were focused on internal development. In 2017, the state's policy opened to international cooperation - the first two mutual recognition treaties were signed that year. At the invitation of the Mekniy government, the state became a member of the Union of Micronations of Central Europe. On Christmas Day 2019, the Republic of GSMLL ratified the Charter of the Grand Unified Micronational. After the Quorum on January 11, 2020, the Republic of Upper Schwartz Morgen Lorgen Land became an observer state in the Grand Unified Micronational. In connection with a series of state reforms, on July 24, 2020, the Highest People’s Congress envoys adopted a new constitution, which is modeled on the systems of many modern countries.

GSMLL voters elect parliament consisting of 5 members for two years. During the first meeting, members of parliament elect a Marshal of the Highest People’s Congress. He is the second-highest officer in the state and plays a significant role in the constitutional election of the President. In case of emergency, he substitutes for the President of GSMLL. The President of the Republic of Upper Shwartz Morgen Lorgen Land is elected every three years by the entire parliament.

Republic’s governance is based on the separation of powers. There are three branches of government:

The culture of the Upper Shwartz Morgen Lorgen Land is closely related to the traditions of the western regions of Poland. It puts a deep emphasis on folk traditions and the heritage of 1000 years of Polish statehood. It also refers to native Slavic roots and connotations with German cultural borrowings of the Posnanian region. An important element of culture is the Catholic Faith, which at GSMLL combines theological and folk aspects. Many holidays are associated with this religious tradition, although the constitution guarantees freedom of religion to every citizen. The government of the Republic pays a lot of attention to the culture that has been developed since 2009 when the state was founded. All the citizens are Polish.

The main communication channel of the republic's government is the Facebook fanpage, which is currently published only in Polish. It contains information about concluded treaties, anniversaries, and public holidays. Citizens use a dedicated group on the same website, on which are publication detailed information on the current policy of the government. They can also use a national intranet service, which is only available to citizens and sympathizers of the republic. It was developed at the beginning of 2021 and currently consists of one website that is not available from normal web browser. In 2015, on the initiative of the government, the "Voice of GSMLL" radio was established. In the same year, redaction prepared 3 broadcasts in the form of a podcast. It was publicly available in the form of internet streaming. Together with the heads of states of allied countries, radio prepared an occasional program in 2021, which was in all official languages of all allied micronations.

There are 5 holidays established by law: