Order of the Silver Cat 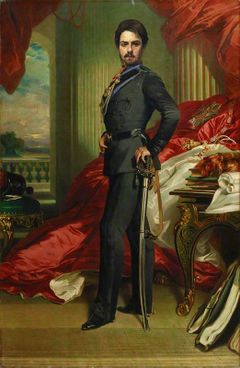 King Arthur II of Ebenthal wearing the sash of the Order of the Silver Cat in painting commissioned to the monarch as a gift from Oscar I, Emperor-King of Karnia-Ruthenia.

The Order of the Silver Cat (Portuguese: Ordem do Gato de Prata) is a national order of knighthood as well as one of the two the highest civilian decoration bestowed by the Kingdom of Ebenthal,[1] in equal status to the Order of Pedro II and followed by the Order of the Blue Blood. Its current Grand Master is King Arthur II.

The order was established in late 2019 by King Arthur II as a dynastic order attached to the national pantheon of orders and awards taking over the place of the Order of the Swiss Prince as the country's highest award. It is granted to nationals and foreigners in recognition to exceptionally meritorious achievements, wether they are micronational or macronational, public or personal, and valuable personal characteristics and/or deeds towards Ebenthal and its people, at the sovereign's will.

Its symbol, a dark silver cat, was inspired by the Ebenthali King's pet, a silver cat Khajiit. The sovereign's love for his pet was taken as an analogy by the order, thus symbolically representing its recipients's love of Ebenthal. The order's motto "Patientia superbia mentis operationem" (English: Patience and pride, intelligence and action) invokes qualities of usually associated to cats which are most valued in people by the King.

Established in 29 December 2019, it was the first honor created by the then-newly enthroned Arthur II as King of Ebenthal. It was created a personal dynatsic order of the Clan Brum and subsequently attached to the national pantheon of orders, this means, if the Clan Brum step away from the throne, the order follows them. The following day the King appointed the order's first three recipients, respectively the heads of Ebenthal's executive, legislative and judiciary powers at time, all of them regarded as national heroes. At first the order would have only one grade, that of knight, but later on 30 December 2019 King Arthur issued the three first inductee's certificates of membership as Grand Crosses and thus he decided the order would adopt a four-grades style.

The order's goal is to honor and recognize a person for her value, character or notorious merit, and therefore it is to be granted at the pleasure of its grand master and sovereign, the monarch. Its motto inspires personal characteristics such as patience, resilience, pride, intelligence and will to act, much valued by the King and noticed by him as common to cats, which then inspired on the order's name; "silver", though, comes from King Arthur II's pet, the silver-white and brown cat called Khajiit and was also hevaily inspired by the Order of the Golden Fleece, whereas silver is an analogy to golden. Upon its creation, the order took precendence to the Order of the Swiss Prince as the highest Ebenthali order.

In 20 August 2021, following a decree issued three days earlier, the order was reformed into a purely national order (instead of national and dynastic), for which it was created for it the office of a chancellor to be appointed by the government, and it became a sigle-grade order, sharing its position of highest award with the dynastic Order of Pedro II.

All members ot the order are entitled to the prefixes of "Sir" and "Ma'am". When an individual is entitled to use multiple post-nominal letters, the ones of the order (GCGP for Grand Crosses; COGP for Commanders; OGP for Officials; CGP for knights) takes precedence. All recipients may encircle their arms with the circlet of the order.

Since 24 February 2020, all members of the order disposes from the same right entitled to parliamentary and ministries to require a formal audience with the monarch, a privilege sole to this order.

Members of the Order

Membership in the Order is strictly limited and includes the Monarch, the Crown Prince, the closer relatives of the monarch and various supernumerary members, nationals and foreigners.