The foreign relations of the Kingdom of Ebenthal are implemented by the Ministry of Foreign Affairs. The King and the Prime Minister play a role in setting the country's international policy, and the Minister of Foreign Affairs has a voice on it and is the one responsible for developing the policy.

Since its founding, the Kingdom of Ebenthal and its government pays special attention to foreign affairs as means to legitimize the micronations, its deeds and aspirations before the international community. One of the first ministries of government was precisely the Ministry of Foreign Affairs, which was founded on the same day that the Monarchy, on 11 August 2014.

Although diplomatic relations be conducted by the Minister of Foreign Affairs, the leadership of Foreign Affairs is de facto by the monarch. Ebenthal almonst monthly studies and develops diplomatic relations with several micronations around the world, maintaining cordial relations with everyone and accounting for only one international incidents. Apart of micronations, the Ebenthali State also reserves for itself the right to do not recognize a current govern regime of a nation. 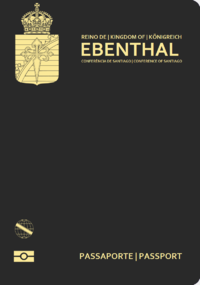 Ebenthal's international relations are based on Article 6th of the National Constitution, which establishes non-intervention, self-determination, international cooperation and peaceful settlement of conflicts as the guiding principles of Ebenthal's relationship with other micronations and multilateral organizations.

In the late 2019, under King Arthur II, the Ebenthali policy incorporated the principle to not recognize anymore simulationist and historical-modelist micronationational projects as real micronations, on the grounds that these format are often fanciful, full of fiction, and it may be summarized as the simulation of an existing state, and thus, not be de facto a nation-state. This personal conduct by the King was later officialized when the country became a signatory to the Treaty of Persenburg which establishes the non-recognition of simulationist and historical-modelist micronations as a guideline to it's signatories' foreign policy.

Another side of the Ebenthali foreign policy is the compromise to not recognize political regimes illegaly installed and/or lacking legitimacy. Such as, many of the current world's republics, mostly born from coups d'état against legitimate monarchies, are not recognized, while their previous monarchical regimes are still recognized are sovereign states. This policy it isn't exclusive to monarchies, legally or legitimatelly proclaimed republics, either seccessionists or not, are also recgonized by the Ebenthali government. Former sovereign states which were illegaly annexed are also recognized, by the force of legitimacy as interpreted by the Ebenthali government, as actual sovereign states.

The Kingdom of Ebenthal exerts a relative intersectorial influence, being characterized as a middle power, and a strong influence in the Brazilian sector, where it is a great power, and for which its international policy has been based on international cooperation, mainly in the form of assistance by the know-how transfer. The Ebenthali foreign policy for the Brazilian sector is developed in coordination with the other member states of the Conference of Santiago, the central organization of that sector, and following the Conference of Santiago Statute and other organization documents. Although officially and Ebenthal's foreign policy is based on non-interventionism, in the Brazilian sector micronation acts in an interventionist and clientelist way, assisting and establishing satellite micronations, clients and puppets, especially through the Conference of Santiago Derivative Program. Also in the Brazilian sector, Ebenthal exerts influence due to its position of intersectoral prominence, cause and result mainly from the network of personal relationships between the King and heads of state from other micronations on all continents, and their connections. Ebenthal seeks to make its position indispensable for the external development of other micronations in its native sector and consequently it becomes politically influent over those micronations. Intersectorally, the micronation exerts influence directly and indirectly through the network of contacts of its head of state and its participation in intermicronational organizations.

Ebenthal claims to have received tacit recognition - that is, acts or conduct which, in the absence of any indication to the contrary, can be reasonably interpreted to imply recognition - from several countries which have not explicitly granted the Empire official diplomatic recognition.

The Kingdom of Ebenthal is currently a member of four micronational organizations:

It is also formely a member of other four organizations:

The Kingdom of Ebenthal has been involved in incidentes with the following countries:

This is a list of diplomatic missions of Ebenthal. Its network of embassies and consulates abroad reflect its foreign policy priorities in the Americas and in neighbouring countries that the Ebenthal has historic links to. The list also includes influential micronations with exchange of ambassadors, even if only nominally or only acting by the internet.