Not to be confused with Sough (town).

Sough2020 (/soʊ/) (also known as the Sough2020 Convention on Global Climate Change) was a digital summit focusing on the creation, signing and ratification of the Sough Convention on Global Climate Change Volume II: a treaty aimed towards micronational action regarding climate change, pollution and negative human interactions with the natural world. The convention was conceived by Simon Reeve on 9 October 2020, partially in response to the La Salle Convention from the beginning of October 2020 and inspired by the Paris Agreement of 2016. The treaty has been translated into 5 languages.

Sough2020 served as the successor to the Sough Convention on Global Climate Change, 2019 also created by Simon Reeve as part of a similar convention hosted by the North Atlantic Defence Union in October 2019. Sough2020's long-term goals are to lower micronational carbon footprints through indirect means such as encouraging greener forms of transportation. Despite this, Sough2020 does not solely focus on the lowering of carbon footprints. Subjects such as pollution, environmental destruction, mass extinction of species and other forms of negative impacts on the natural world from human interaction are covered.

Like other treaties in the micronational community such as the Wrythe Convention, signatories do not simply by signing the convention and treaty extend any recognition to co-signatories, due to the "collective desire to ensure the survival of the natural world, and consequently, the human race" transcending any diplomatic differences between micronations. 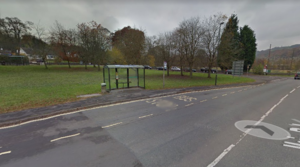 An image of the Aenopian town of Sough as seen from Google Maps.

The full name of Sough Convention of Global Climate Change Volume II came from the name of the convention's predecessor, Sough Convention on Global Climate Change 2019. This was a joint virtual summit hosted by the North Atlantic Defence Union on 29 September 2019, culminating in the creation of a treaty highlighting micronational action against climate change. This was attended and signed by 4 member states of NADU: Aenopia, Ponderosa Hills, Malinovia and New Eiffel.

The name Sough comes from the Aenopian town of the same name located in the Aenopian territory of Aenopian Calver which was annexed on 26 July 2019. The name of the town comes from the name of an adjacent shop run by retail brand SPAR.[1] Sough further derives itself from an underground basin which collects water from several lead-mine soughs which runs through the village of Calver before running into the River Derwent.[2] Sough can also mean to make a long high or low sound while moving, particularly whilst referring to the wind or the sea.[3] Other uses of the name Sough include a Hamlet located in Lancashire, England[4] and an underground channel for draining water out of a mine.[5]

The idea of a micronational climate change treaty and convention was initially conceived by Simon Reeve in September 2019, akin to the Paris Agreement of 2016. This culminated in the creation of the NADU Climate Summit 2019. This was a virtual summit held on 29 September 2019 attended by 4 member states of the North Atlantic Defence Union. The summit focused on micronational efforts to reduce the effects of climate change. The summit culminated in the creation of the Sough Convention on Global Climate Change Volume I which was initially created in the Aenopian city of New Aberdare on 25 September 2019 before entering into force on 1 October 2019.[6] The convention was the 2nd volume of the North Atlantic Defense Union's Treaty Series, covering treaties signed, ratified or created by NADU parties or representatives. This convention also covers deadlines set by NADU parties covering the abolition of negative emission-producing everyday objects. One notable feature of the convention was that it did not cover the complete removal of carbon emissions from the atmosphere, instead focusing on reducing micronational carbon footprints alongside other subjects.

The creation of the treaty itself began on 2 October 2020 with the creation of the preamble. Sough2020 was officially created and subsequently began on 9 October 2020 by Simon Reeve, including the creation of the primary server. The first meeting was held on 11 October 2020, covering the concepts of an environmental agency and encouraging wildlife within member states. On 5 November 2020 it was announced that the final treaty would be translated into different languages representing the signatory nations. This includes English,[7] Welsh,[8] French, Mandarin (traditional),[9] and Spanish.[10]

On 21 November 2020, the final confirmed meeting discussing the contents of the treaty was held by Simon Reeve.[11] This marked the end of talks discussing the treaty and started the process towards final editing, translating and publishing. Simon confirmed his intentions to release the final treaty before 29 November 2020 when signing would begin by participating nations. On 26 November 2020 Ross presented the final treaty to the participating nations for voting. Signing began on the same day.

When I first started this convention on 1 October 2020, I was doubtful that the convention would be successful, considering the fact that another individual was running a convention on their own. We've had our ups and downs, with a brief uncertain period when 3 nations left at the same time however we have pushed through regardless. This has been an incredible experience, working with people from across the community and the world, people I know well and new faces in the community.

— Simon Reeve following the publishing of the treaty, 2020

Logo of the Sough Environmental Union, the successor organisation representing the Sough2020 treaty.

The Sough Convention on Global Climate Change Volume II was officially released to non-participants in the micronational community for signing and ratification on 1 December 2020. The same day, the contents of the treaty formally came into effect within the signatory nations. Following the conclusion of the summit, it was intended for participants to begin creating the Sough Environmental Union under Article X of the treaty. However this plan fell through following Ross' ascension to Chair of the Cupertino Alliance on 15 February 2021.[12][13] Sough2020 signatory states were also invited to attend the CA-GUM clean-up event from 12-15 June 2021.

As of 10 November 2020, the Sough Convention on Global Climate Change: Volume II consists of 7 pages made up of 9 articles (including 6 sub articles). The article consists of 1,251 words and 8,052 characters.

The primary objective of the Sough Convention on Global Climate Change Volume II is to act as a catalyst for micronational action regarding climate change, pollution and negative human interactions with the natural world, both through the treaty and convention itself and through external action of signatory and non-signatory states. An important part of the treaty is that all signatory states recognise the causes and dangers of climate change, and stand up against it for the benefit of the human race and Earth as a whole. All Parties also recognise species and areas for which have been affected by climate change in one way or another, such as the extinction of a species. The Sough2020 convention and treaty also serve as a continuation of the original North Atlantic Defence Union climate change Convention and Sough Convention on Global Climate Change treaty.

The Sough2020 treaty also aims to improve micronational perceptions of negative human interactions with the environment, whilst also aiming to encourage signatory states to transition from potential harmful habits and lifestyles such as the use of single use plastics and greenhouse gas-emitting forms of transportation to greener, environmentally friendly alternatives such as using public transport. 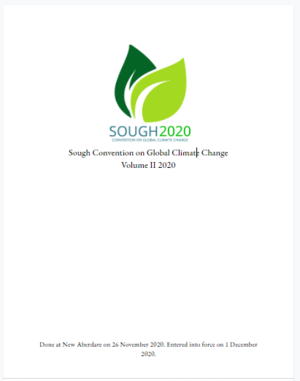 In order to protect the sovereignty of signatory states, the Sough2020 convention focuses critically on advising signatory states and nationally determined action and contributions. Instead of being forced to adhere to an article, member states are advised and recommended to follow the contents of the treaty, with signatory states provided with the opportunity to choose articles to adhere to, albeit this was initially met with criticism. This allows for consensus-building, allowing for voluntary and nationally determined targets. A key example of this are Articles IX and X, which both state:

It is hereby decreed that signatory states can determine their own national contributions to Sough2020 and the subsequent fight against Climate Change. These commitments would not be treaty-wide, however would be enacted by individual delegates and their associated nations. This allows signatory states to enact their own contributions post-Convention in regards to their own requirements and limitations.

At the convention's peak on 26 November 2020, 31 nations participated in the convention. However, as of 5 March 2021 only 30 nations have formally signed and ratified the final treaty following its publication. Following the formal publication of the treaty on 27 November 2020, participating nations of the Sough2020 convention were provided with 72 hours to sign the treaty in order to be classed as an original signatory. The treaty was published for non-participants to sign on 1 December 2020.

In order of ratification...

During the Statistic-Dime 2020 MicroWiki General Survey conducted from 4 November 2020 to 15 November 2020 by Zabëlle Skye, 48% of the 63 participants[15] said that they had heard about Sough2020.[16] The creation of the convention and treaty is credited to have been a catalyst in the reformation of the North Atlantic Defence Union by head of the convention Simon Reeve on 28 October 2020 alongside other factors. Sough2020 was also briefly mentioned in MicroWiki's 25 Most Influential (2020) released on 2 December 2020.[17][18] It was also confirmed during the creation of the convention that the Sough2020 treaty would be implemented into the constitution of the Antonian Empire.