From MicroWiki, the free micronational encyclopædia
(Redirected from Grand Kingdom of Matachewan)
Jump to navigation Jump to search

The Kingdom of Matachewan, commonly known as Matachewan and shortly as Polonia is a self-declared sovereign-state bordering Ontario, Canada. Matachewan was founded on 30 June 2015. It's date of dissolution is blurry however despite best efforts it is said to have been abandoned during a call on 26 July 2021. However, the nation has, since 1 June 2022, been restored by the King of Matachewan and members of the former government.

Matachewan was proclaimed a sovereign state – though a de facto cultural project on 30 June 2015 within the township of Matachewan, Ontario by Brandon Mierzwa, thereafter Brandon I, King of Matachewan. Matachewan was without political structure and legal definition and was often contested which sparked numerous conflicts during 2015 and into 2016. In the aftermath of said conflicts, Matachewan laid dormant through 2017. Matachewan as a concept was at this time completely intertwined with the kings perception of it, and having found an interest in politics, king Brandon revitalized Matachewan during 2018. This was in an attempt at bringing it closer to statehood and this motivation would be a defining factor through the rest of Matachewan's existence. In August 2018 Matachewan had its first prime minister, Kamiron Chaisson, of which very little is known. The creation of this office would begin a trend of relatively frequent change within the political stage of Matachewan – and prime ministers could be subject to replacement as often as every passing month.

The history of Matachewan is often divided into separate "kingdoms" representing eras in history in a similar understanding to the several French Republics which have been constituted.

Matachewan's lack of legal definition and political structure came to an end under the Chaisson government, but the integrity of the state saw a trend of success and fail in its endeavours nearly always resulting in infighting and the proclamation of regime change. However, despite the political instability and lack of competent leadership, throughout Matachewan's history the nation attempted what in certain understandings of micronationalism would be described as overly ambitious or radical, having the intent to and arguably succeeding to obtain both civic and ethnic nationhood. During the year of 2018 Matachewan became involved with external interractions, such as with the Second Aenderian Republic and the Kingdom of Auvenum. Despite the contacts Matachewan had established with Aenderia and Auvenum, Matachewan did not achieve anything or much note during 2018, falling promptly into dissaray forming the second and third incarnations and culminating in its absorbtion into the Kingdom of Groponigën. [1] The duration of dominion under Groponigën was notably marked solely by infighting between the Queen, Brandon and Peter Warren until Matachewan subsequently left. The Fifth Kingdom of Matachewan, succeeding the status of Matachewan under its union with Groponigën, declared together with the questionable Kingdom of New Prussia that the two would be joined together in a poltical union. The two states agreed to coexist as two separate states within one political entity known as the Matachewanian-Prussian Commonwealth or Matachewan-Prussia that would have one king.[2]

During the existence of the entity of Matachewan-Prussia, the nation went through three leadership changes and complete abandonment of its legislature before its dissolution. Matachewan-Prussia was also influenced by a major foreign event in its sphere of diplomacy concerning Etukan and Cycoldia. The feud between the two nations and their vying for support from Matachewan-Prussia trickled over well after the dissolution of the Commonwealth as a political and sovereign entity. On 27 August 2019, the Matachewanian-Prussian Commonwealth was dissolved and the Kingdom of Pomorskie, (called the 6.5 Kingdom) declared the "Grand Kingdom of Matachewan" one of the most successful and long lasting kingdoms of Matachewan.

The Grand Kingdom of Matachewan was not only the most successful form of the state but the most ambitious. The Grand Kingdom of Matachewan, predominantly dominated by Chris Ramsay and his Progressive Conservative Party, led three initiatives to localize Matachewan and shift its focus away from social media. Serving as Prime Minister of Matachewan until Beau Edwards, Brigadier General, was unanimously elected on the 20th January 2020, by a Matachewanian Sejm formed at the King's residence. During this time, the local government had also introduced citizenship certification which was printed and distributed to Matachewanian locals. This would be the first and last time the Matachewanian Government would have effectively enforced its bureaucratic capability.[3] Other successful but not strictly local examples of Matachewanian bureaucratic success are shown by the citizenship application[4] and the 2020 census.[5] The Grand Kingdom of Matachewan also became dragged into many of the problems between Cycoldia and Etukan just like its predecessor. However, unlike the Commonwealth, Matachewan attempted to side with both sides by playing friendly with both Etukan and Cycoldia. Eventually, after pressure from both sides and the Progressive Conservative Party having little support for Etukan in the government pulled out of the Matachewanian-Etukara Agreement in 2020. 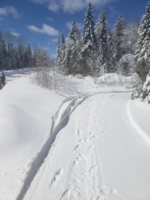 Matachewan formerly used it's own currency the Zloty which used to be backed by pine wood but was eventually abandoned. The National Banking Committee which was to be made up of, the King, Premier, Minister of Economic Development, and three other committee men co-appointed by the King and Premier and verified by the Sejm. Were to be in charge of keeping a record of the Zloty and how much wood is in the national bank along with printing the Zloty.[7]

Matachewanians enjoy many different foods but the most popular foods and drinks that local Poloniaians enjoy are:

Poloniaian Media is mostly consisted of the government owned YouTube Channel PoloniaGov.. The channel primarily features Poloniaian Music and 1 map video. Polonia has two new papers 1 being the inactive Polonia Weekly and the other being Labour party Owned, Peoples Voice. Another media channel in Polonia is the privately owned Lokin Productions, this media channel being owned by Nicholas Lokin.

Matachewanians listen to a variety of music but primarily listen to Germanic, Slavic or Scandinavian Patriotic Marches or Folk Music. Matachewan has made 1 piece of music named the Matachewanian Waltz No. 1 composed by HM Brandon I. 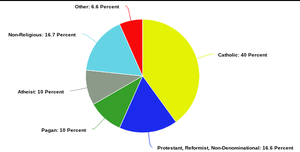 Matachewan, unlike most modern nations, does hold a state religion and is not an official secular state. However it should be noted that Matachewan does guarantee religious freedom to all it's citizens.

The largest religious group in Matachewan is Catholic which is the country's state religion. Before the government restructure and citizenship removal, Matachewan used to have a significant Jewish population.

Other religions and groups include: 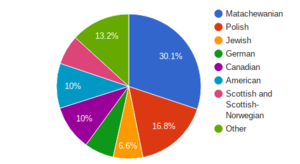 The Kingdom of Matachewan is a multiethnic nation with many cultures making up Matachewan. However it should be noted that much of local Matachewan (Central and Northern Matachewan) have major populations of Polish-Canadians and First Generation Poles. The large Polish population is the reason why Matachewan borrows many symbols and names from Poland. Matachewanians who have embraced Polonization have went under a new identity different from Polish. This new identity is recognized in Polonia as "Matachewanian", a culture made from the Anglification of Poles in Matachewan. The Matachewanians, similar to the Polish-Siberians, identify as Polish exiles as many of the Poles that make up the new Matachewan culture as descendants from political and religious exiles from Poland during the Soviet control of the country.