The Republic of Luchijan, more commonly known as the Luchijanian Republic, was a nation founded by 3 friends on Discord on 19 October 2020. Luchijan is a sovereign nation, commonly referred to as a micronation by observers. Luchijan has around 50 registered citizens as of May 2021.

On 19 October 2020 Luchijan declared independence from the United States.

The predecessor to Luchijan was founded on 9 November 2018 as the Kingdom of InfinityLand. The monarchy of InfinityLand was abolished once on 7 January 2020 in favor of a Union of Republics. The Union was dissolved and the monarchy was re-established. The monarchy was abolished again on 10 October 2020, being replaced by a federal republic (this would be the same government type as Luchijan). The then president announced the dissolution of InfinityLand on October 16 and it was dissolved at 10pm EST on 18 October. Luchijan was founded the next morning at 10am on 19 October 2020 in Amerikas' personal discord server. Eventually it got its own server, a constitution was written, citizens became part of it, and diplomatic relations were made with other nations. The former main territory was decided on 25 October 2020. On 27 October 2020 the President signed the Treaty of Alliance between Luchijan and the Jarldok of Hjakvik, which established formal relations with Hjakvik. Luchijan applied for the Grand Unified Micronational on 29 October 2020. Luchijan has announced plans to establish formal relations with the Republic of Aswington but the head of state Juan Cisneros has not yet responded to Luchijan’s request to establish diplomatic relations. On 30 October 2020 a new province was founded, the Dominion of Maple, which is Luchijan's second North American territory. On 1 November 2020, Luchijan was admitted to the League of Independent Nations as an observer state. On 3 November 2020 a civil war started in Luchijan, where the rebels took a lot of territory. On 14 November 2020, Luchijan was upgraded to a provisional member in the LIN. On 15 November, the rebels surrendered, and the same day the Province of North Virginia was ceded to the new USSR. Late night on 27 November, President Luke resigned due to some controversy. RichRacc became the provisional president at midnight EST on 28 November. On 2 December, Luke came back into power. Luchijan was occupied by Keland on 11 December. Luchijan also became a federation, and started transitioning to Social Democracy. It turned back into a republic on 12 December. Luchijan was given to NeoUK on 14 December 2020, becoming New British Luchijan. It stayed part of NeoUK until 9 February 2021, when Luchijan regained independence. For next few months, nothing significant would happen and as such, it wasn't recorded, so nothing much is known about the timeframe from 9 February to 10 July. But then, due to significant activity in the summer, on 11 July, Luchijan and it's territory were absorbed back into the United States, although never announced. On 20 December, Luchijan was reconstructed by the President and some other veterans. Eventually, on 21 April 2022, Luchijan and all of it's territories were merged into the Republic of Asdenia.

The Republic of Luchijan maintained bilateral and diplomatic relations achieved by the signing of a treaty with the following nations:

The Republic of Luchijan was recognized by the following nations as of 20 May 2021.

The currency of Luchijan was the Luchijani Mark. The former currencies were the Luchijanian kvard and the LoSM Mikrodolaro, the former had almost no value (1 kvard being 0.01 of 1 cent USD, 10 kvards being 1 cent USD, etc) The Swedish krona, United States Dollar, and the Euro are all official currencies. With the kvard, a millionaire in Luchijan would have less money than an average American. The latter was discontinued due to inactivity on the project.

Luchijan was a secular state. Most of the residential population is either atheist or Christian. The religion of the other citizens is unknown. 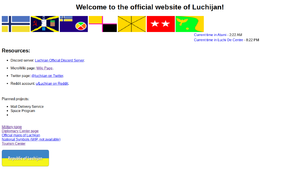 Luchijan formerly had a radio station, Radio Luchijan. It was in their Discord server, but was deleted at an unknown time. The old website, which had maps, a Tourism Center, a Diplomacy Center, and other things, was discontinued due to being destroyed by an unknown source. The website was then remade. On November 21, 2020, Luchijan started moving their embassies from their Discord Server to their website. The moval was haulted on December 3, 2020 when the 2020 Nordvilla-Luchijan Conflict began. Luchijan created a brand new website with a Stock Market, chat app, and Voting system, in February 2021. Currently, some of the government higher-ups are making a open-source social network, which will have a special instance for Luchijani citizens.

The first colony (Colony of West Africa) was founded on 29 October 2020 following new territory claims. The only major territories were the Dominion of Maple and the Autonomous Republic of Atami. On the evening of 1 November 2020, the leader of Monmark forced Luchijan to give up most of it's land claims. The territories before the inactivity were: Avarodi Province, Atami, North Island, MCA, Northwestern Socialist Republic, and Republica Province. North Virginia was formerly a province until it was given to the New USSR. Luchijan annexed Overwood on 14 February 2021, and gave full independence to the Republic of Dairaba on the same day. As of 21 December 2021, Luchijan's territories were: Kalnasia and Lakrivia.