Aenopian Calver is a territory of the Empire of Aenopia located north of the British village of Calver, comprised of a large area of uninhabited land in a grassy area that's heavily covered in trees. Although it has no inhabitants, Aenopian law is enforced by the Emperor, and the territory is defended by the Aenopian Airforce. Within Aenopian Calver are the cities of White And Sough and also the Plushunian Overseas territory of Aenopian Plushunia.

The Territory was annexed during the Emperors trip to the area in July 2019, after he found the 'little place rather serene and lovely apart from the fact that there's large roads next to it.'

The surname 'Caler' refers to the small village named Calver in Derbyshire, which comes from the Old English "c(a)lf", a calf and "ofer", a ridge.[1] The Domesday Book for Derbyshire records the place "Caluoure" with the Pipe Rolls of Derbyshire entering it as "Caluore" and "Calfovr", in 1199 and 1239 respectively.[2] This refers to the fact that the territory is located within the Village of Calver.

'Calverian' is the official demonym used to describe something belonging to the territory of Aenopian Calver, this is also the demonym for someone from the territory itself. However, due to the possibility of referring to the nearby village, it isn't commonly used.

Technically, 'Aenopia' can refer to the whole Empire, or to the sovereign state of Aenopia, which does not include the territories or sections; there is a small distinction between the two. 'Aenopia' is also the ac name for The Empire of Aenopia, which is often used by other nations in informal discussions and ease of communication. 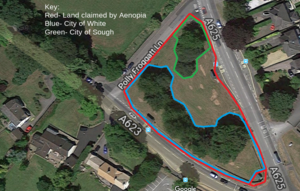 A map of Aenopian Calver in July 2019, showing off the cities of White and Sough. between the cities is Aenopian Plushunia. This map has since become outdated due to shrinking of the 2 cities.

The territory of Aenopian Calver was annexed during a visit to the Peak District by HRH Logan I on 23 July 2019. Logan described the small field located by a junction as being 'Rather serene' following later inspection, and even proceeded to sleep under a tree whilst waiting for a bus. The annexation of Aenopian Calver wasn't formally announced due to fears that Empire of Emosia would annex it as part of the Dominion of Aenopia at the time and concerns regarding how other nations would receive the claim following the fall of New Cymru, despite the fact that a news article covering the subject had been partially written.

On 5 August 2019, following discussions with Plushunia, it was decided to gift a small section of land between the cities of White and Sough as an Overseas Territory of Plushunia.[3]