Before the present design was adopted, the Empire of Aenopia used two other flags; a tricolour blue-white-blue displaying the national coat of arms of Aenopia, and five oblique bands of blue, purple and grey. The former was the direct descendent of the present day design, in which it featured the coat of arms centrally located on the now-iconic blue-white-blue tricolour. The latter flag was adopted as the first national flag of Aenopia on 16 August 2019 following Aenopian independence. The design was derived from a version adopted by the Dominion of Aenopia, of which featured the Emosian flag on the five oblique bands of blue, purple and grey.

Because of the flag's widespread use across Aenopia and the micronational community, the flag of Aenopia is recognised as the primary symbol of Aenopia as a sovereign state. The colours of the design are regularly displayed in various logos and state symbols, the most notable example being the coat of arms.

The first flag of the Empire of Aenopia displayed five oblique bands of blue, purple and grey in a manner similar to the corporate identity of Transpennine Express 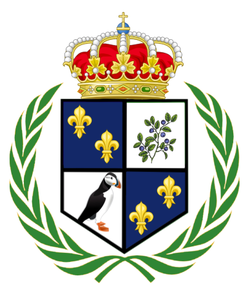 The former coat of arms of Aenopia was present on the flag of Aenopia from 4 February 2020 to 11 March 2021, and started a tradition of featuring coats of arms on trcolour flags which continues to this day.

The earliest concept for an Aenopian flag was created on 30 June 2019. The flag, featuring red and white stripes and the flag of the United Kingdom in the canton, was heavily influenced by the flag of Aenopia's predecessor, New Cymru, whilst bearing a near-identical design to the flag of the East India Company. The flag was initially intended to represent the "Federation of Aenopia", a proposed successor state to the erstwhile-New Cymru. Despite this, the first flag to be adopted by Aenopia featured five oblique bands of blue, purple and grey with the flag of Emosia in the canton. The design, colloquially referred to as the "shattered stained glass",[1][2] was based on the corporate identity of Transpennine Express, a railway company based in the North of England.[3][4] In addition, the flag demonstrated similarities to the Flag of Seychelles, however any correlation was unintentional. The "Emosian Shattered flag" was used by the erstwhile-Dominion of Aenopia from its establishment on 1 July 2019 to its independence on 16 August of the same year.

Aenopia declared independence from Emosia on 16 August 2019, with a version of the "shattered glass flag" omitting the Emosian flag representing the newly-established Empire of Aenopia. The design continued to represent the Empire of Aenopia from its inception until 4 February 2020. Despite its initial popularity within Aenopia, the design's close connection towards a corporation' identity encouraged the creation of a new national flag displaying national symbols of Aenopia. Furthermore, Article VII of the Reform Act further encouraged the replacement of the design with a tricolour flag:

It is required that the current flag of Aenopia, dubbed the ‘Shattered Stained glass’ flag is replaced by a new flag, which utilises dark blue amongst 1-3 other colours. It must also feature the aforementioned Coat of Arms [of Aenopia] previously specified in Article II in the centre.

As such, the "shattered glass flag" was replaced on 4 February by a tricolour blue-white-blue design displaying the national coat of arms of Aenopia. The coat of arms, also adopted on 4 February 2020, featured numerous national symbols such as the Atlantic Puffin and Bilberry branch: 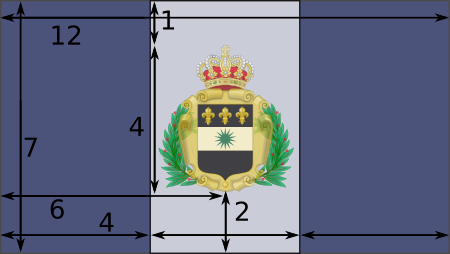 Specifications for the flag of Aenopia

The Empire of Aenopia’s flag is dark blue and white, with the coat of arms of Aenopia displayed in the center

The flag displays three bars of equal width and has a length–width ratio of 7:12. The blue-white-blue arrangement was initially inspired by the Flag of Baustralia and was first adopted on 2 February 2020. No law has specified the shades of these official colours, as the colour arrangement of "Blue-White-Blue" had originated in the former flag of Aenopia. The blue stripe has usually been a dark navy blue; earlier flags featuring the colour arrangement displayed a lighter blue, which was darkened on 11 March 2021.

The flag is blazoned in English as, "Tierced in pale azure and argent." 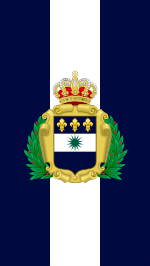