Initially presented to Aenopia under the DPU Special Lands Plots program, Aenopian Potawatomi was annexed on 1 December 2020 following the passing of the 6th Territory Act. Aenopian Potawatomi was involved in the Great Des Plaines Valley War after a joint operation between the 1st Calvary Division of Rodentia and Foreign Legion of Philmont invaded numerous territories located in the area. Following the invasion of Saspearian,[2] Tesforia and Paloma, the Philmontian Army travelled towards Aenopian Potawatomi. Following the invasion of the other territories, Coalition forces led by the People's Union of Chaveleir Socialists were deployed towards the Aenopian border to defend Aenopian Potwatomi, before being forced to retreat due to heavy resistance of the invaders.

The economy of Aenopian Potawatomi mostly consists of services, specifically focusing on regional and international companies including Lobil.

The name Aenopian Potawatomi originates from the name of the Native American people of the Great Plains, upper Mississippi River, and western Great Lakes region. This itself is derived from the Ojibwe Boodewaadamii(g) (syncoped in the Ottawa as Boodewaadmii(g)). The name Potawatomi is a translation of the Ojibwe word “potawatomink” meaning “people of the place of fire.” In their own language, the Potawatomi refer to themselves as the Nishnabek or “people.”[4] 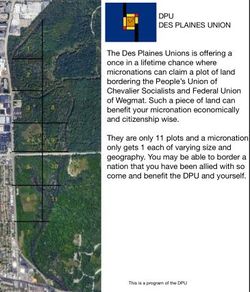 During the early part of the Paleozoic Era, the area that would become Aenopian Potawatomi was submerged beneath a shallow sea and located near the Equator. Diverse marine life lived at this time, including trilobites, brachiopods, and crinoids. During the Pleistocene Epoch which lasted from about 2,580,000 to 11,700 years ago,[5] vast ice sheets covered much of Illinois and Aenopian Potawatomi.

Before being annexed by the Empire of Aenopia on 1 December 2020, Aenopian Potawatomi was formerly a part of Cook County, Illinois. Cook County was created on 15 January 1831, out of Putnam County by an act of the Illinois General Assembly. It was the 54th county established in Illinois and was named after Daniel Cook, one of the earliest and youngest statesmen in Illinois history.

The territory of Aenopian Potawatomi was originally presented to the micronational community under the DPU Special Lands Plots program under the initial designation of no. 8 on 23 November 2020. Under the program, 11 plots of land surrounded by the Federal Union of Wegmat and People's Union of Chaveleir Socialists were offered to interested nations. Applications would be reviewed by the Des Plaines Union before being formally assigned to the applying nation. This project was run by Cole Baird of the Federal Union of Wegmat. An application for the plot of land was submitted by the Aenopian Government on 24 November 2020, with the plot being awarded to Aenopia on 1 December 2020. The territory of Aenopian Potawatomi was formally annexed under the 6th Territory Act the same day.[6][7] 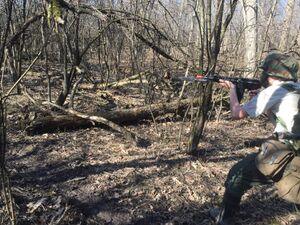 The territory remains quite reliant on the nearby Weg cities of Crystal springs, Irving and Bodwatmi, Irving. Goods are often transported from Bodwatmi to Crystal Springs where they then can be transported via boat up the river. Some trade comes up the river from the Port of Irving however most trade is conducted from a bridge crossing the Des Plaines River at the Wegmat-Chaveleir Border.

The primary timezone of Aenopian Potawatomi is Aenopian Mean Time, whilst the territory forms part of the Central Time Zone as with the rest of the state of Illinois. The border with the Eastern Time Zone is located a short distance to the east. 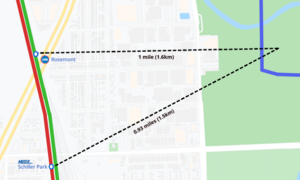 Map of distances between rail connections to Aenopian Potawatomi.

Aenopian Potawatomi is located approximately 1 mile (1.6 km) from Rosemont station (CTA) on the Chicago "L" rapid transit system. and 0.93 miles (1.5 km) from Schiller Park station on the North Central Line with services operated by Metra. Rosemont station (CTA) is located on the Blue Line (CTA) and is located approximately (2.18 km) from O'Hare station which acts as the terminus of the line. Trains are scheduled to depart from Rosemont every 2–7 minutes during rush-hour periods, and typically take about 36 minutes to travel to the Loop.

Schiller Park station is located on the North Central Commuter line and serves the village of Schiller Park, Illinois.[14] The station is 17.4 miles (28.0 km) away from Chicago Union Station, the southern terminus of the line.[15]

Aenopian culture primarily follows the basic principles of the Western culture due to its geographical location in the world and subsequently, its population. Some Christian holidays which have become embedded into Western society (Christmas, Easter, etc.) are recognised and celebrated by the population as National Holidays. Aenopian Potawatomi also adheres to these principles as a territory of Aenopia.

English is the most commonly spoken language in Aenopia and the only language used on a daily basis for communication; it is the only language used for government and diplomatic business, although Welsh is rarely used for more ceremonial occasions and is featured as a secondary language on numerous Aenopian documents and treaties. Aenopia also ceremoniously recognises Welsh as a national language.

Rocinante-upon-Afon is an active participant in the Cupertino Twin Towns project, after being paired with 3 cities on 1 May 2021.