Desert District (dəˈzərt ˈdistrikt), often incorrectly referred to as The Desert District, is a self-proclaimed sovereign state, more commonly referred to as a micronation. Contained entirely within Southern California, it was founded on 10 June 2020 amid the COVID-19 pandemic. Desert District is a republic with democratic features, with both the Head of State and Head of Government being the First Secretary, a position that is currently filled by First Secretary James Bornstein CSA. Its legislative branch is a 7 seat chamber known as the Legislative Body. Its capital city is Ryanlandia and its largest city is Kassinovia.

Desert District has numerous unofficial predecessors, most of which being former, smaller, and less professsional nations lead by the current First Secretary. This began with Ryanlandia, whose successor is Desert District's capital city, the Democratic Republic of This Table, the Democratic Republic of Liberecostan, and finally the Holy Empire of Formositas, which was with the Treaty of Formositas a nation declared as the spiritual predecessor to the Empire of Kodrolia, due to it possessing shared land claims, as well as the fact that Kodrolia's Emperor Elder served as Formositas's Prime Minister, while James Bornstein served as its President. Kodrolia and Desert District have since had close diplomatic relations. These nations tended to be unprofessional and immature, albeit being relatively active with working governments, judicial systems, and diverse and unique cultures. Said cultures of these nations have greatly influenced the culture of Desert District and has lead to the naming of numerous cities within Desert District.

Desert District became an observer in the Cupertino Alliance on 10 October 2020, and became a full member on 28 October 2020, and also became an observer in Grand Unified Micronational on 25 March 2021. Desert District aditionally became a member of the Constantia Pact on 31 January 2021, and became a founding member of the United Defense and Cooperation Treaty Community on 9 March 2021.

The Konstitucio (Constitution) of Desert District is a document that encompasses the main ideas of James Bornstein and Lee Bastino when they set out to found Desert District. It establishes a legal system, legislative system, and the powers of the executive. It contains most of the legal articles for Desert District.

Drafting began on 9 June 2020, a day prior to the official founding of Desert District. As there were no legal systems in place, Desert District was in a temporary government shutdown from its founding until the finalization of the Konstitucio.

It was eventually finalized on 5 August 2020 and the government immediately re-opened, and a joint statement from then-First Secretary Bastino and then-Legislative Body member James Bornstein was made announcing this development. [1]

Desert District is primarily located notably in a desert, in fact, a completely empty portion of the desert, however there is also several pieces of inhabited land which makes up Desert District. First Secretary chose this land to be the first territory claim in order to have a blank slate, in this case a completely bare piece of land. As it is a small piece of land, he chose to only call it a District as opposed to a Republic or Federation.

Jameson Heights, established by former First Secretary Bastino, was named as a tribute to the the founder of Desert District, James Bornstein.

Desert District was founded on 10 June 2020, by First Secretary James Bornstein. The founding occured amid nationwide protests against police brutality, an issue he viewed a widespread problem in the surrounding United States of America. He became extremely disappointed in the direction his nation had begun going. He founded Desert District alongside former First Secretary Lee Bastino, Legislative Body Rep. Kassinove, and now-Treasury Secretary Elder, who also serves as the Emperor of the Empire of Kodrolia.

On 22 June 2020, First Secretary Bornstein announces that he supported the Black Lives Matter movement and condemned the racism and police system of the bordering United States. He also declared his intent to run for re-election in that statement from the First Secretary’s Office.[2]

On 25 June 2020, First Secretary Bornstein announced in an executive order that the government was completely shut down until the major Konstitucio revisions were complete. This meant trials were delayed, and the Legislative Body could not vote. The response was generally positive among government officials.[3]

In June 2020, First Secretary Bornstein announced via executive order that until 31 July 2020, “face masks must cover the mouth and nose at all times”, and specified that this can be extended depending on the length of the COVID-19 pandemic. It was a response to the bordering the US county that borders Desert District had its highest amount of new cases of the virus the day prior to the signing of the executive order.[4] It became invalid following the ratification of the Konstitucio.

2021 saw increased development for Desert District such as daily cabinet meetings from Monday-Friday, which amid the COVID-19 pandemic take place outdoors, with both face masks and social distancing being used. This helped establish Desert District's mostly ceremonial but significant economy take off.

Numerous diplomatic treaties, with nations like the Empire of Kodrolia, were signed and several diplomatic meetings both in-person and virtual took place.

First Secretary James Bornstein was an anonymous individual, who is the first and current First Secretary (Head of State) of Desert District. Although he doesn’t live in the nation at this time, he lives relatively near and has stated he hopes to live there in the future.

Since his interest in micronationalism began in 2016, he had longed to create one on the land that is now known as Desert District.

A military was established in September of 2020, with just five members with three Privates, one Corporal, and one Colonel. Trainings occur twice weekly in-person on Tuesdays and Thursdays with the Colonel leading with assistance from the Corporal when necessary. [5]

In 2021, a joint military base with the Empire of Kodrolia was established, and the bi-weekly trainings were then moved to this location, where Desert District troops performed trainings alongside Kodrolian troops.

Desert District’s climate is notoriously hot and is one of the hottest known micronations. In summer, the weather often reaches over 120 Fahrenheit. It is a desert, hence the name Desert District. In winter, it averages around 72 Fahrenheit. [6] Rain is a rare event and is often celebrated by the people of Desert District. Coyotes are commonly found in Desert District and have been declared the national animal due to this.

Desert District's claims are all in the Palm Springs, California area. The culture as such is generally influenced by the unique culture of this area, such as vast LGBTQ+ Pride, Mexican food and culture, and more.

Though the Konstitucio is written from a leftist perspective, the nation has a wide variety of political beliefs and 5 political parties, with the Democratic Socialist Coalition being the ruling and largest party, led by James Bornstein, which promotes, "Universal Healthcare, Climate Change Awareness, etc."[7]

The Legislative Body has often made concessions to the leftist branch of the Body. It even gave a majority vote on the Economy Act of 2020, a landmark decision introduced by Bornstein, the First Secretary and Legislative Body Representative for the city of Kassinovia that establishes a currency and directs the "workers to own the means of production".[8] 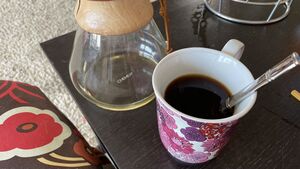 Coffee made in a Chemex is very commonly enjoyed in Desert District. Here, an organic Colombian coffee is shown.

Coffee is most often viewed as the best drink. This is due First Secretary Bornstein’s love of coffee. Coffee is even grown in Desert District.

Religion is very varied in Desert District. While the initial and incumbent First Secretary Bornstein, identifies as an agnostic atheist and as Jewish, many other religions are present.

Desert District is a secular nation, however, therefore the government has no official religion.

While these holidays are not officially legislated, the government is not in session on the following days with the exceptions of significant emergencies.