(listen))) is a port and town within Empire of Aenopia. Located within the territory of Aenopian Teme, it has an area of 100m², and is the 2nd smallest city in Aenopia by area, overtaken by New Aberdare. It features Aenopia's only port, which features the base of the Aenopian Navy. It is the county town of Aenopian Teme.[a] Although it has no inhabitants, Aenopian law is enforced by both the Emperor and Governor, and the territory is defended by the Aenopian Coast Guard and Air Force.

Port Syrinx was initially annexed by Simon Reeve on behalf of the Empire of Aenopia on 3 August 2019, initially under the name of Machyllneth Upon Teme. The town was one of 4 settlments involved in the independence of Aenopia from Empire of Emosia on 16 August 2019 alongise New Llandudno, White and Sough. Port Syrinx is de-facto the headquarters and base of operations of the Aenopian Coast Guard, primarily due to the town hosting the only body of water in Aenopia.

The prefix Port comes from the Latin word of 'Portus', ultimately from Proto-Indo-European *pértus.[1] A port is a place on the coast at which ships can shelter, or dock to load and unload cargo or passengers.[2] Port can also refer to a town or city containing such a place, which is used in the case of Port Syrinx.

The word Syrinx refers to Rush song named 'Temples of Syrinx', which is a part of the 20-minute long song 2112 by the band. The song lyrics follow on from the previous part of the song, with everything the protagonist being "told" coming from "The Priests of the Temples of Syrinx". The Priests (with the help of a set of "great computers") micromanage every aspect of life.[3]

The location of Port Syrinx and the island territory and surrounding land itself was formerly the site of an old water-powered corn mill (records date this back to 1332), which became an iron and brass foundry before becoming the host of an Electric company in the 20th century. The area later became Ludlow Swimming Baths, with the nearby mill building being the changing rooms, however these closed after a new leisure center was built. The old swimming baths were demolished, leaving what is now Aenopian Teme behind. The local area nowadays is owned by Dinham Millennium Green Trust, which cares for the area otherwise known as Millenium Green; a designated area of SSSI located within a conservation area.

Port Syrinx is located on the northern tip of the island of Aenopian Teme, accounting for approximately 1/5th of the total area of Aenopian Teme. It is bordered by the River Teme from the north to the west, whilst being bordered by a shallow body of water to the east. To the south of the town lies a small barrier of shrubs and trees. The Port Syrinx town limit covers an area of 37 m² (398.3 ft), making it the second smallest settlement in Aenopia besides New Aberdare. 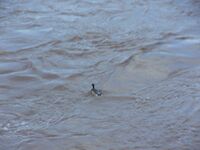 An image of a Duck near to the port: ducks are commonly found around the territory.

Port Syrinx is a rich and varied aquatic habitat, containing a wide range of plants, including two large mature trees and supports a large number of animals especially birds, with Ducks being the most common wildlife in the area. Nearby, it is common for Salmon to travel upstream en route to their spawn points, however this is more common upstream.[4] Improvements were carried out to Dinham Weir located directly opposite to Port Syrinx in 2013 to improve the fish pass. Improvements made included installing eel tiles and a bypass channel.[5] The territory of Aenopian Teme is located in the River Teme, which is classed as a Site of Special Scientific Interest (SSSI). Species of interest found in the River Teme SSSI include tawite shad, otter, native crayfish, lampreys, bullhead and pearl mussels.

Port Syrinx experiences a temperate oceanic climate (Köppen: Cfb), like much of the British Isles, with warm summers and cool winters. Summer daytime temperatures regularly top 20 Celsius, quite often reaching 25 Celsius on sunny days during July and August in particular. In more recent years, temperatures have occasionally reached over 30 Celsius. There is regular but generally light precipitation throughout the year. Temperatures are usually within a range of 2 °C - 7 °C in winter but can drop as low as -11 °C. Winters are characterized by rain and, in recent years, large downfalls of snow. Summers are warm and humid with occasional heavy rainstorms, however, there are usually only about one or two thunderstorms per year.[6] Port Syrinx's average annual rainfall is 806.6 millimetres (31.76 in)[7] compared to a UK average of 1,125.0 millimetres (44.29 in),[8] 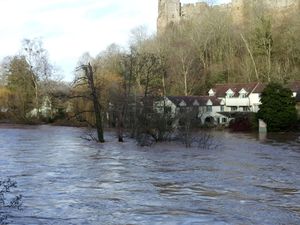 The territory of Aenopian Teme submerged under floodwater following the effects of Storm Ciara in January 2020.

As with the rest of the territory, Port Syrinx suffers heavily from flooding during Storms. In early 2020, Storm Ciara hit the UK and caused widespread flooding throughout the Macronation, with the county of Shropshire being hit badly.[9] This resulted in increase of the river levels, causing the town to be submerged underwater temporarily.

Aenopia follows the basic principles of Western Culture due to its geographical location in the world and subsequently, its population. Some Christian holidays which have become embedded into Western society (Christmas, Easter, ect.) are recognized by the population as National Holidays and as a result, celebrated. As a result, Port Syrinx also follows the same basic culture which has been implemented into Western society and the rest of Aenopia as well.

English is the most commonly spoken language in Aenopia, both in Port Syrinx and Aenopia itself, known and used daily by the entirety of the population. English is the only language used for government business, although some Welsh is rarely used for more ceremonial occasions. The nation itself also accepts Welsh as a national language, however, it is unknown whether the population actually speaks Welsh.