This article lists notable National symbols of the Empire of Aenopia. 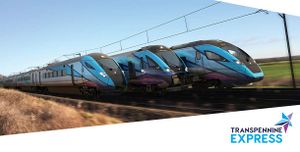 The origin of Aenopia's flag, seen as an artist's impression of the operator's new trains. Credit:TPE

Referred affectionately by many as "shattered stained glass", the National flag of the Empire of Aenopia is the symbol used primarily to represent the nation, its people and its assets. The flag was initially designed during the planning stages of Aenopia, when it was a Federation. The design comes from the the British Train Operator Transpennine Express, a regional train operator that runs services across the North of England operated by FirstGroup.

The Puffin is recognised as the national animal of Aenopia, for which was decreed as such on 1 July 2019 following independence. It is represented as the state animal for all territories and Crown Dependencies. The puffin does not reside within any territories, however, so as such is a symbolic figure. The territory of Greater New Aberdare does recognise the Robin as the territorial Animal, due to infrequent visits of the animal. 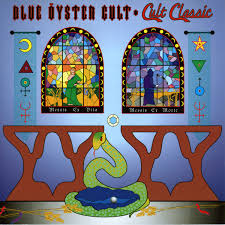 The album cover for Cult Classic; the national anthem of Aenopia (Buck's Boogee) is featured on the album

The national anthem of Aenopia is Buck's Boogee by American rock band Blue Öyster Cult, for which is featured on the album Cult Classic. The song is fully instrumental, so as a result does not feature any lyrics. The song was adopted as the anthem during the reign of New Cymru, so as a result has stuck ever since. The anthem is played at National events.