From MicroWiki, the free micronational encyclopædia
(Redirected from AAA)
Jump to navigation Jump to search

The Aenopian Aerospace Administration (AEAA, formerly AAA; /eɪeɪeɪ/) is an independent agency of the Empire of Aenopia responsible for the civilian space program, focusing specifically on aeronautics and space research. AEAA was established in 2019, following the first launch of the Nova I rocket. The primary goal of the Aenopian Aerospace Administration is to further advance scientific and aeronautic research in the interest of the Empire of Aenopia. The AEAA focuses primarily on the development of its flagship projects the Helliwell Awyren 5 fighter aircraft and Starless IV rocket program. Previous projects included the Nova project and E-11a rocket-plane concept.

Internationally, the AEAA is represented by its parent nation in the International Aerospace Community as a founding member. 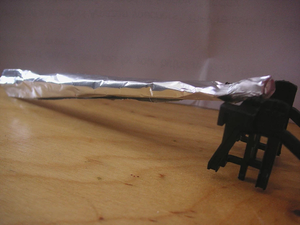 Nova I-001 after its unsuccessful flight on 5 July 2019. The Nova I would set the stage for future Aenopian launchers.

AEAA was first founded by Simon Reeve on 5 July 2019 as AAA, with the intention of setting up a space and aeronautics research corporation for Aenopia. The first rocket was launched on the same day under the Nova I series of rockets, designated as Nova I-001. The launch was, however, a failure following the rocket blowing up after takeoff. During a post-incident investigation, it was announced that the fault was caused by the low quality tinfoil bursting from the high pressure built up inside (something which is intended with the design of rocket).

Following inactivity within the agency, it was decided following the revitalisation of Awyren 5 Project to design an Experimental High Speed Rocket-Aircraft for scientific purposes. It was also announced that Nova I would be retired in December 2019 with only 2 completed launches under its name, however it has been reported that at least 1 more flight has been booked before the date.

Following increasing competition from nations such as the Commonwealth of Essexia and the Republic of Yu-Xia involving the development of launchers, development of a light launcher was declared in January 2021 with the project under the name of Starless IV being formally unveiled on 21 January 2021.[1][2] This would later lead to the formation of the International Aerospace Community on the same day as a joint venture between the Empire of Aenopia and Commonwealth of Essexia.[3]

Since its foundation in 2019, AEAA's strategic goals have been:

(Left to right): Nova I, Starless IV, the two launchers of the AEAA's past and future.

AEAA formerly had or will have a fleet of different launch vehicles in service with which it will compete in all sectors of the micronational launch market. Rockets are developed by a consortium of Helliwell Systems and the AEAA, with Helliwell Systems dedicated to the production. Rocket launches will take place at New Llandudno Spaceport, having previously taken place with Nova I launches in the Aenopian territory of Greater New Aberdare.

The first Aenopian-produced rocket to fly was the Nova I, which first launched on 5 July 2019. The rocket would fly only twice, with the project being concluded in December 2019. Following the conclusion of the Nova I program, development of rockets mostly stalled until January 2021, when in response to recent rocket launches from other nations development on the Starless IV began.

The Nova I was a small rocket produced and flown by the Aenopian Aerospace Administration in July 2019. Based on a simple 'Matchstick rocket' design, the Nova I unsuccessfully flew twice during its production run in July 2019. The first flight, conducted by Nova I-001, flew on 5 July 2019 and marked the formal foundation of the Aenopian Aerospace Administration. However, the launch failed when the rocket exploded immediately after ignition. The problem was identified as poor quality Aluminium foil. A second launch was conducted on the same day by Nova I-002 which also failed.

Out of the presumed 2 Nova I rockets produced, only 1 example has been preserved at the New Aberdare National Museum.

Starless IV is a reusable single stage rocket currently under development designed and manufactured by a consortium of the Aenopian Aerospace Administration and Helliwell Systems. The first stage is intended to be powered by a D12-7 solid rocket motor produced by Estes Industries, producing 29.7N of thrust. Development of the Starless IV, named after the song “Starless and Bible Black” by English progressive rock band King Crimson, began in mid-January 2021 with the AEAA officially unveiling the Starless IV on 21 January 2021, measuring approximately 38 cm long. Production is scheduled to begin at an undetermined date, presumably mid-2021.