The Essexian Aeronautical and Space Technologies (EAST) is the Commonwealth of Essexia's dedicated Space Program. It's Chief Administrator is Jack (KG), with it's Deputy Chief Administrator being Crown Minister Summers. It is a member of the International Aerospace Community.

Similar to most micronational space agencies, EAST also trains in and utilises software such as Kerbal Space Program, SimpleRockets 2, Reentry, Space Engineers and Take On Mars.

The agency is headquartered in Les Paddocks, Greater Danbury, with missions occurring in the field adjacent to the front of the building.

EAST was first founded by Earl Finn on the 25th of October 2018 as the original Essexian Aeronautical and Space Technologies, when he first brought the idea to Parliament and published the original logo (which consists of just the centre of the roundel), with the intention of setting up a space research corporation of Essexia. However, on the 15th of August 2018, Lord Jack had established a separate scientific organisation called CRESER, however he merged the two entities on the 17th of April 2019 to create the modern EAST organisation. On the 17th June 2019, the Parliament of Essexia established EAST as a solely government venture, and made Lord Jack it's head.

On the 8th November 2019, Chief Administrator Earl Jack established EAST as an unincorporated association in the United Kingdom, for the practicality and to allow further cooperation with the UK in launching sub-stratospheric vehicles and abiding by both the UK and Essexia's Laws regarding aerospace.

The agency launched Essexia's first rocket on the 10th November 2019, at 14:06 GMT (Two days ahead of schedule). The launch of this initial vehicle was captured and broadcast across the micronation, but the flight and recovery was not due to a technical issue. The parachute failed to deploy properly, and a small part of the engine mount was partially damaged, but otherwise the launch was deemed a success. A second launch was performed of the same vehicle at 14:42 GMT, in which the parachute deployed successfully, and the entire event was captured and broadcast. Following this event, much of the Parliament wished for more transparency with the agency, which was promised by Earl Jack through a Keynote that was to be uploaded later that day regarding where EAST is, and where they're heading.

Alpha Flight was delayed in December 2019 due to problems regarding the structural integrity of the test craft. The end date of the program was put back to March 2020. On January 27, 2020, the design of the Epstein MkIIB rocket was completed, and 3D printing was to start within the next two weeks. A launch date was set for mid February, and on the 14th, the launch was set for the 19th. This late launch was mainly due to Storm Dennis and Storm Ciara causing rain, winds and cloud over much of Essexia. The rocket successfully launched and reached 100 foot (One of the goals of Alpha Flight), however the parachute failed to deploy, and the rocket crashed into the ground. There was, however, no major damage to the craft. Following an enquiry, it is believed that the rocket motor burnt through the discharge end of the rocket mount, and instead of deploying the parachute, the wadding and parachute were burnt and destroyed. This is also likely due to the Nosecone fitting too tightly. A redesigned rocket motor, new parachute and nosecone adjustments are currently being designed and assembled to make the Epstein Mk.IIC.

Chief Administrator Jack added co-founded the International Aerospace Community with Simon Reeve (Administrator of the AAA) on the 21st January 2021, of which EAST became a member of.[1]

EAST programs are typically named after the Greek alphabet, as the five currently planned series of missions all aim at laying the foundation for more ground-breaking discoveries and research. EAST currently have plans to develop the agency for up to four years until the organisation is a respectable and more public institution, which, if still in operation by that point, may be able to seek the help of other organisations in order to better progress in more revolutionary fields such as sub-orbital flight and high-altitude data gathering.

Alpha Flight aims to launch Essexia's first Domestic-built rocket, reach 100 ft and then 100m in separate flights. It has already completed the first two aims, and has nearly reached the third.

Following in the footsteps of the Lurk Space Agency many years prior, EAST began Project Theia on the 10th November 2019, a low-cost program to observe and capture images/videos of various stars and celestial bodies.

On the same day as Project Theia's creation, Project Aeolus was initiated. This was to be a study into the use of weather balloons for the purposes of high-altitude research, however it was cancelled on the 19th August 2021.

The Corporeal Project was created on the 3rd June 2020, with the intended goal of launching an insect crew up to 500 ft in a planned Epstein Mk.IV. It is projected this will be achieved at somepoint in 2021.

In an MoD Keynote on the 30th November 2020, the Rt. Hon. Jack MP (Minister of Defence and Chief Administrator of EAST) announced that the next EAST launch would be in February 2021 using the new Epstein Mk.IIC, an updated version of the Mk.IIB which features a new engine mount along with some structural alterations. This launch date has been delayed numerous times however.

Beta Flight was given a mission patch on the 31st December 2020.

The Epstein Mk.I was designed in early 2019 as a theoretical low-altitude launch vessel. It would've used A4 Motors, the least powerful that EAST has access to. It never proceeded beyond the design phase.

The Epstein Mk.IIA was the original CAD design for Essexia's first domestic rokect. It also never progressed beyond design, as it was optimised and redesigned into the IIB. The planned motor was either an A4 or B6-4.

The Epstein Mk.IIB was Essexia's first domestic rocket, being designed and built at Les Paddocks. It's only flight was on the 19th February 2020, when it reached 100 ft. The rocket mount was damaged beyond repair, requiring a redesign. It was designed to use B6-4 engines, and had a more aerodynamic nosecone and fin set. 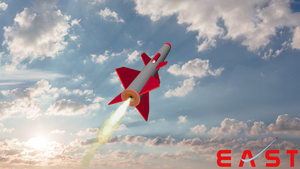 Epstein Mk.IVE concept image. The fins, nosecone and 2nd stage fuselage length were the most heavily optimized aspects from the Epstein Mk.IIC design. The Maxwell Booster (1st stage) can also clearly be seen.

The Epstein Mk.IIC is currently in design, with a revised rocket motor mount and adjusted nose cone. Other than the mount, it will use the IIB in its current configuration. It is also designed to utilise both the B6-4 and the planned C motors, in order to reduce cost and waste. It will also include a small altimeter to record the apogee of the rocket, to confirm the completion of the 100m goal of Alpha Flight.

A theoretical multi-motor rocket called the Epstein Mk.III, or the Epstein Heavy, is currently planned for design. It will use EAST's C motors in a tri or quad configuration to reach a considerably higher altitude than any previous rocket (Estimated around 600 ft). Due to the planned larger fuselage (to incorporate multiple motors within the main fuselage), a small, retrievable flight computer will be included within the rocket in order to record various data, including altimeter, speed and barometric pressure (In order to accurately record pressure, the rocket will also have multiple small holes).

In addition to the 'Heavy', it was decided on the 25th December 2020 that another rocket would be utilised during Beta Flight: The Epstein Mk.IV which includes a Maxwell Booster. It will be Essexia's first multistage rocket, likely featuring the same diameter and a very similar upper stage as the Epstein Mk.IIC. However, the lower-stage will be a 'Maxwell Booster', carrying another rocket engine. After the booster has depleted, the upper stage motor will engage, theoretically pushing the lower stage away. EAST hopes to make both stages recoverable to minimise turnaround costs. On the 18th August 2021, it was announced that EAST had finalised the design of the rocket, now named the Epstein Mk.IVE, and that construction would begin before the end of the month.[2][3] Currently, the rocket is on stage 4 of a 9 stage construction plan.[4]

Another theoretical rocket called the Epstein Mk.V, or Crewed Epstein, is planned for design, and will have the capability to carry a crew of small insects to around 500 ft. This is under the Corporeal Project.