On the 12th of February 2019, Emperor Terry, accompanied by his Regent Lord Matthew, Essexian Regent and Chief of the Armed Forces Lord Jack, Chief Ambassador, crossed a farmers field opposite Lord Matthew's ministerial estate, the Danko House, to march upon a World War Two era pillbox to claim the fortification for the defence of the Commonwealth, and in the name of the strategic interests of the Nation. At 16:20, Emperor Terry planted the Essexian flag, and decreed the pillbox as "Fort Morris," the first Essexian fortification. History of the Fort

The history of the fort, which is located in Sandon, Chelmsford, is unclear. Pillboxes were built extensively across the English countryside in the early 1940's in preparation of an assumed Nazi naval invasion. Essex is a largely flat county, and particularly Chelmsford, would have been a clear target of German attack. Therefore, pillboxes of this type (Pillbox FW3/28A) were not uncommon in Essex. However, this particular fort, is presumed to have been placed to stop any advancement from Danbury up to Chelmsford. It was an anti-tank gun emplacement at the corner of Molrams Lane and Maldon Road. It was disguised as a shop but underneath is a concrete bunker which is what remains today. The anti-tank gun poked through the shop window and even had an ice cream advert pasted on the barrel to disguise it. There were six soldiers based in this fort, and when the Home Guard became better equip, eventually every soldier was issued with a rifle for defence.

All the pillboxes in the area were on a parallel to the route of the A130 to Southend, so as to prevent German troops advancing to Chelmsford and taking key positions in Essex. According to a source from the BBC, at the Molrams Lane gun emplacement the local people used to take it in turns to provide a hot meal everyday for the soldiers. After the war, it is presumed the fort was abandoned and as such the plywood exterior is no longer present, and the concrete shell underneath is all that remains of the structure.

In 2017, when Essexia was declared independent, there was confusion as to how the nation would defend itself against attack. For over a year, the official doctrine adopted by the military was to use civilians homes as bastions, to hold off invasions through a series of pre-planned measures. Following the New Years Reforms, Lords raised concerns about the immorality of the doctrine which could expose citizens to unwanted involvement in conflict. It was decided that the doctrine would be abolished.

The Essexian Military discussed multiple alternatives however action was desperately needed. Proposals included fortifying the Emperors Chelmsford retreat (Danko Shed) with corrugated metal sheets that would be financed by Lord Jack. However, the arrangement worked out to be too expensive and as such, the plan was abandoned and the shed was taken out of the question without extensive modifications due to its weak oak construction. Other suggestions included modifying cars, investing in potato guns or water pistols.

While having a meeting with Lord Jack about a finance report, Lord Matt noticed that across his estate was a disused pillbox in English territory. It was realised that the fort was not owned by anybody and was a public building. The only obstacle was crossing a farmer's field and claiming a route to the fort as Essexian territory. Defence minister Jacob McVaddy was tasked with drawing up the plans for invasion.

On the 10th February 2019, Defence Minister Jacob McVaddy proposed the plan to seize the fort. It involved a multi-pronged push from three angles of the field in the evening, so as to startle any resistance. Soldiers would enter the field from three angles and encircle the fort, and once cleared of belligerents, Emperor Terry, accompanied by an entourage of his inner circle, would rush the fort and plant the Essexian Flag and decree the fort, and a 1-meter wide pathway to it, Essexian Territory. The plan was reviewed by Lord Jack and Admiral Summers. The plan was debated in an emergency session of Parliament, where it was proposed that the use of air support may be vital to ensure full air superiority. The Emperor agreed, and Lord Matthew also concurred that the airspace was too vulnerable to interception for an attack to go seamlessly.

Lord Jack saw the increasing need for urgent action and was convinced that the minutes from the Parliament would be leaked and full defensive measures would be imposed by the British. However, the Emperor was on the side of the Parliament, and it was decided that the attack would be postponed for one day for Lord Matt to secure air superiority and scout the area for any unknown defensive measures.

The following morning, Lord Matthew flew his drone over the field to capture video footage of the area and to secure the airspace. The only known interference to the plan would be birds, and this threat was deemed improbable of causing issue. The same day, the Parliament assessed the footage, and thought the muddy conditions of the field would mean soldiers would become bogged down. They refused to allow the invasion. Infuriated, the Emperor, now in agreement with Lord Jack and Matt, decreed the invasion would go ahead as planned. The Parliament refused to allow the use of the military for the invasion, and so the Emperor decided that he, with his inner circle, would rush the fort alone. This is a decision that awarded him positive praise in the nation. The field that separated Danko House and Fort Morris, prior to the Rush.

On the afternoon of the 12th February, Emperor Terry, accompanied by just Lord Jack and Lord Matthew, exited the state residence for the field. They were being watched by the home guard of Lord Matthew, who were in a call with the Parliament to update them on events. The sky was relatively clear, and the weather had become much better overnight. The ground, while muddy, was relatively fine to walk on.

Upon reaching the entrance to the field, the attackers noticed that there were three English cars parked to the side. It was realised that there was potentially huge risk in crossing the field, and Lord Jack became suspicious they were walking into a trap. Realising they were in English territory and breaching international law, Lord Jack started frantically running across the field so as to startle any scouts in surrounding buildings. Emperor Terry and Lord Matthew, fearing the entrance had been compromised ran through a hedge, ruining the Emperors Imperial blazer. Lord Matthew had also brushed his hand against a rough branch, and his palm was heavily bleeding. Parliament ordered the attack was to be suspended and the Emperor returned home, but the trio was already halfway across the field. Although never confirmed, it was reported that there was shouting from the farmhouse and that there were at least three English belligerents watching. It is not known why they never fired upon the entourage.

Upon reaching the fort, is was feared by Lord Matthew that there was soon to be an ambush, and they were in a compromising position and so the formalities had to be rushed. Lord Jack, exhausted from the long run, remained outside of the fort to remain lookout. Upon entering the fort, the Emperor read the following Imperial decree,

"By the Decree of King Terry of Essexia, this English fortification is the sovereign territory of Essexia, and thus all military, diplomatic and national activities that are conducted here are devolved from that of the British state to be conducted under Essexian Constitution and law." 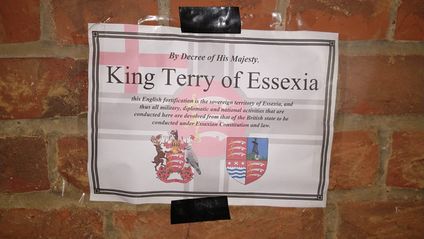 A plaque placed on a wall of Fort Morris, declaring it to be Essexian territory.

He proceeded to plant these words, inscribed on a paper plaque to the wall, and planted a fabric Essexian flag into the ground. After this he stood outside and waved the state Essexian flag, and the three called, "Long live the King, Long live the Commonwealth, Long live Essexia!"

Realising that they were in a vulnerable position, the trio ended the formalities and embarked on the journey back to the Commonwealth. On their return, Lord Matthew noticed by the entrance, stood multiple English forces. Emperor Terry proposed they separated and took different exits, so they were not all to be captured if attacked. Lord Matthew opposed this idea, as it was unlawful to leave the Emperor on his own in such circumstances. The Emperor however, realising the lack of time, ordered both to embark on different exits. Lord Matthew exited by sneaking through the farmers backyard and round to his front gate. Lord Jack utilised the opening made by the Emperor earlier and exited through the hedge. Once on the other side back in Essexian territory, there was momentary relief, before the Emperor's absence caused panic. Lord Jack attempted phoning the Emperor on his personal line, however the signal was too bad. The home guard suggested flying the drones over the field, however it was realised there was not enough time. Fearing the worst, Lord Jack was about to phone Defence Minister Jacob to mobilise the army. However, about 5 minutes later, the Emperor emerged, covered in mud, and slightly fazed. It is presumed he slipped in the mud and was knocked unconscious in the field; however, it is not known, due to the fact the Emperor could not remember anything of the indecent after.

The Emperor was rushed to the State Residence, where he was attended to by his compatriots. He was diagnosed with mild concussion; however, he was not admitted further medical care.

The event, as seen in the Commonwealth, was a decisive Essexian victory and majorly raised the morale of the Essexian people after concerns about defence. To this day, the flag remains, and no effort has been made by British Forces to recapture the fort.

There has been misconception that the Fort was named after the now disgraced New Westphalian President Daniel Morris. The Essexian government clarified that the name 'Morris' derives from the surname of a former Media Studies teacher of Earl Jack, rather than the aforementioned micronationalist.