From MicroWiki, the free micronational encyclopædia
(Redirected from Lord Jack of Essexia)
Jump to navigation Jump to search

Jack first came to power on the 26th December 2017, and his primary goals were to continue building on Essexia as a micronation, to build the foundations to a GUM membership and to please the citizens with luxuries and employment. On August 5, 2018, Lord Jack was expelled from the monarchy by Emperor Terry after ceding to the terms of a previously-unknown rebel faction led by Lord Matthew. Jack was also fined ¥20,000. However, on the 18th of August Emperor Terry made Jack Prince again alongside Prince James due to Jack possessing higher motivation and skill at building and managing the Queendom.

He is the only individual to have held every major office in the Essexian Parliament (First Minister, Second Minister, Minister of the Interior, Foreign Minister and Chancellor of the Exchequer).

Logo of the National Conservative Party of Essexia

Lord Jack was able to found The Wincott Cup on the 16th February 2019, with Parliament support.

He is currently the acting manager of Essexia FC, and has been since the 29th March 2019.

He became the Chief Administrator of EAST on the 17th of April 2018, and remained until the 22nd of May when CRESER was reopened and EAST was discontinued. Since the 17th June 2019, he has been head of EAST, with CRESER and EAST being merged.

During the events of the Black Weekend Jack made few public actions but was one of the founding members of the Old Guard Party, and was the only member of the party who made conscious efforts to negotiate with then-First-Minister Lord Jamie rather than starting a VNC. The endeavor paid off, despite demands from the Old Guards to end the dialogue, and Lord Jamie stepped down peacefully and somewhat less discontentedly.

Lord Jack resigned from all of his positions on the 1st of July 2019. He became Minister of the Interior and General of the Imperial Navy on the 12th July, and was made Chancellor of the Treasury on the 29th July. On the 12th August, Earl Finn, as acting Minister of the Interior, bestowed the Earldom of Molrams upon Jack (Previously held by supporter of Essexia Andy W.), as well as the Most Noble Order of the Commonwealth of Essexia (KG), on behalf of the Emperor, for his success in being the first Essexian to reach Everest Base Camp at 5,364 metres.

He founded the WAR Party on the 4th January 2020 with Crown Minister Summers of Essexia to advocate for military supremacy, however this was disbanded the next day following the events of the Grey Weekend.

Lord Jack created a new Coat of Arms on the 15th January 2020, based on the template of Earl Finn's new Coat of Arms. The top features an Imperial eagle, demonstrating Jack's devotion to the Emperor and hinting to the original form of Government, the Empire of Essexia. In front of this is a shield and a Protestant crucifix, showing the Lord's christian roots. The canines on either side reference the Lord's original pets, a German Shepherd and a Golden Doodle. In the top left of the main shield is a map of the United Kingdom and two crossed Lee Enfield rifles to pay homage to the family's extensive military roots. In the bottom left are waves and an Atlantic Star medal, furthering this homage. Finally, the motto, "Peace Through Conflict And War", references both the Lord's belief in the restorative ability of righteous conflict, and these previously mentioned military roots. The Canadian leaves also reference the branch of the ancestry that emigrated to Canada.

The Lord began work on the Legal Foundation Program on the 20th January 2020, desiring to create a functioning and model legal structure for Essexia. The first milestone in this program was the Judicial Establishment Act, which was first created on the 23rd January 2020. This specific document aimed to set in motion the initial structure of the courts, judges and necessary processes. On the 30th January, after a brief overview by Lord Jacob, it was put forward to Parliament for debate, however Earl Finn and Lord Matthew pointed out a number of criticisms and suggested improvements, and the Bill was retracted and updated with these considerations in mind by Lord Jack. It was put forward again on the 5th February, as well as the First Amendment to the Constitution to clear up contradictions with the document. The Bill was put to a vote on the 7th and passed with an overwhelming support of 9 ayes to no nays or abstains. The First Amendment was then put forward on the 8th (Due to the absence of the Emperor delaying the end of the first vote) and passed with 8 ayes to no nays or abstains. These two documents were some of Lord Jack's greatest legislative achievements, and some of the more complex examples of Essexian legislature, along with the Constitution and Ministerial Reform Act 2019 (The latter of which was fundamentally designed by the Lord as well.)

He played a major role in the Raging Valentines event on the 14th February 2020, and became First Minister on the 17th during the prorogued Parliament, a consequence of the 2020 Essexian general election.

After securing the support of Lord Jamie and the Royalists on the 25th March 2020, he became Second Minister on the 26th, after a brief window of opportunity for him to become First Minister was closed by Emperor Terry, who demanded Lord Jamie stay.

Crown Prince of Millania Nicolás Millán bestowed upon Jack the officer title of Frigate Captain of the F.A.R. Granada Nicosi, Millania's second largest ship in length. This was in response to Lord Jack recommending to the Minister of Defence that Millán be given the title of Captain of the IEN Mersea.

Jack renounced his title as Earl of Molrams on the 7th May 2020, in order to settle an ongoing dispute in the Cabinet regarding the legitimacy of his vote on the Nobility Reduction Act 2020, and in order to prevent a future dispute regarding the true Earl of Greater Danbury. He later left the Commonwealth to form the Second Federation of Essexia on the 1st June 2020. After it's subsequent failure, he did not return to Essexia until around the 18th.

During the GUM Virtual Summit on the 7th November 2020, Jack announced his candidacy for the Grand Unified Micronational election, December 2020, however few took the announcement seriously. After a short deciding period, he chose Leon Montan as his running mate on the 12th November, and replaced his old campaign logo (Featuring 'Dean Someone') with a higher quality one featuring Leon's name ('Dean Montan'), as well as choosing his campaign slogan 'Things Can Only Get Better'. Until dropping out of the race on the 13th December, Joey (Who also announced his candidacy on the 7th November) was Jack's only opposing candidate, and at the start of their campaigns in November Joey appeared to be the clear choice for GUM Chair. However, following a large-scale poster campaign conducted by the Dean team, as well as the release of Jack's manifesto on the 7th December 2020, the tides had appeared to have somewhat turned; there was no longer a clear winner. Following Joey's dropping out of the race, Abrams I of Ikonia then announced his own candidacy on the 13th November 2020, despite previously stating he would not even vote so that his impartiality could be ensured until the following election in which he intended to run. However, both Jack and Cameron's side attacked each other with public statements and posters, and after Cameron released his manifesto on the 15th December and Jack released his timeline as Chair on the 16th, Cameron dropped out on the 17th following Adam I's announcement of his candidacy. Again, the election had seemed to have turned and there was genuine concern on both sides regarding who would become Chair; Whilst Jack had been in the race longer and survived two separate candidates' tactics, Adam had been both Chair and Vice-Chair previously, and had been active within the community for longer. The Chair debate hosted on the 20 December by Amelia I was heated, and featured both Jack and Adam putting forth competent paragraphical answers to prove their worth. A number of people believed that Jack came off better, but on the whole people saw both candidates as seemingly familiarised with the problems at hand, and having the skill set and policies to combat them. When voting opened at midnight Christmas Eve (24-25 December), both campaigns were optimistic about their chances. However, by the end of Christmas day, Jack had a clear lead over Adam, and by the end of the 26th he had secured a majority of all votes and claimed victory (although he would not become Chair until the 1st January 2021 as per electoral laws of the GUM).

As a result of the events of Hot Pink Friday, Jack was invited by Emperor James I to create a government and become First Minister of Essexia. Jack accepted this role, and became the 12th First Minister. However, he lost his majority and was replaced by Newton von Uberquie on the 2nd March 2021.

After First Minister Newton's resignation on the 3rd May 2021, Emperor James appointed Jack as his successor due to his recent activity and no one else appearing to hold an interest in taking up the role. Jack promised "[to] Appoint a new, streamlined cabinet [...] Boots in Mersea 2021 [...] Greater cooperation with other states". 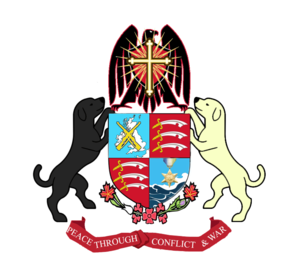 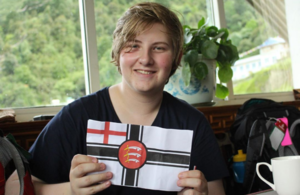 Earl Jack of Molrams sitting in a Sherpa restaurant in the town of Lukla, Nepal at the start of his expedition. The flag pictured was planted at the Everest Base Camp peak at 5,364 metres in August 2019.

Prince Jack rose to power during late January 2018, when, whilst employed within the Essexian Government before the Parliament existed as a historian, Emperor Terry divorced Lord Matthew. During these dark days, when invasions and battles were common, Emperor Terry named Jack as heir to the Essexian Throne, and knighted him Prince Jack of Essexia. Jack replaced Prince Harry , who had not participated in Imperial duties and was found to be unfavourable by the people of Essexia.

On the 5th of August 2018, Prince Jack was expelled from the monarchy after falling out of favour with the Crown Court, leading to the Emperor eventually taking action. Emperor Terry then immediately signed the Treaty of South Jaywick, which forced Prince Jack out of the monarchy, fined him ¥20,000, and made the rebels agree not to strike should they disagree with the new, elected Prince. However Jack was made a Prince again by Emperor Terry on the 18th of August. His reign ended on the 1st January 2019, with the New Year reforms making Prince James the only Prince of Essexia.

Lord Jack is the representative owner of the Les Paddocks palace and Legislature building. Previously, when the Parliament had no place to convene, Lord Jack had held a number of meetings and one Session there. In recent times, due to it's better accessibility, accommodation, and availability, Earl Finn's Hawarden property has been used instead (Specifically the Danbury Conference building). On the 17th June 2019, Jack hosted the first day of the Danbury Conference at Les Paddocks, in the now-christened Emperor Terry Wing of Les Paddocks.

The site underwent a major reconstruction with the removal of a small number of trees in the area. It is also undergoing a survey by British Telecoms to fit fibre-optic for greater internet connection.