The Great Essexian Memeoff was a competitive poll held on the 10th September 2020 in the Commonwealth of Essexia. The opponents involved were Harry B, Zabëlle S, Supreme Judge Jacob, George S, Lord Jack (KG) and Francis S. They were vying for the glorious position of the Essexian 'Daily Memer', an individual responsible for posting memes every day to the Commonwealth of Essexia server.

Harry won the poll with 69%, retaining his position despite prior public outcry. Zabëlle came second place with 24%, Jacob third with 3%, Jack fourth with 3% (however the Emperor attempted to disqualify Jack due alleged voter fraud), Francis fifth with 1% and George sixth with 1%. In total, 311,694 votes were recorded, which led to accusations from political critics that foul play was involved, however nothing more was heard from these critics and the result remained. 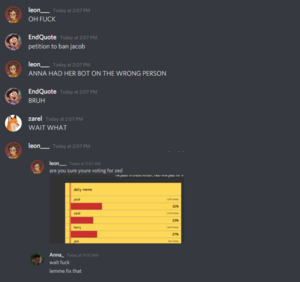 A failed attempt to bot the results

In the weeks leading up to the poll, the incumbent Daily Memer Harry B had, on multiple occasions, neglected to send a meme every day, instead skipping in some cases multiple days. This angered the citizens of Essexia, who had on too many occasions been let down by their entertainment sire. Lord Jack (KG), as the forefront of the Essexian historian community and speaking as a former Daily Memer and official Discord historian of years past, revealed that in 2017, the last time the daily meme had existed of which Harry was also the Daily Memer, a similar neglect had unfurled. As such Harry had been replaced by a number of entertainers, before the service was ultimately cancelled in 2018.

The people demanded reform to the Daily Meme, and as such the Emperor announced his intentions to select a new Daily Memer on the 8th September 2020. The poll was announced and held by the Emperor on the 10th at 17:50 BST, beginning an arms race of sorts within minutes. By around 18:20, Harry and Zabëlle had appeared as the front runners, followed by George, Jacob, Francis and Jack (Who had no votes at this point). However, by 18:40, Lord Jack had concluded his monumental strategy dubbed the 'Swipe and 3 taps' strategy of single-handedly climbing the ranks, as opposed to other candidates who had utilised teams of voters to succeed. He had achieved third place (~17% of the vote) by the time he concluded his war effort.

The Harry Team announced a "Manhattan project" of sorts at around 18:45 to defeat Zabëlle, who was at that point in the lead by around 200 votes. At around 18:50, an hour after the poll opened to the dozen or so voters, a shift occurred; the Harry numbers suddenly began increasing rapidly, progressing from approximately 1,000 to 1,500 in mere minutes. It was revealed that one of the voters has developed a revolutionary digital voting device (Dubbed a 'bot'), capable of amassing hundreds of votes in under a minute. As more bots were brought online, the Zabëlle Team appeared to have cracked the infamous 'Harrynigma Code', and soon began activating their own bots. Due to the sudden influx of votes for the front runners, every other candidate's vote share began rapidly decreasing, despite any prior alliances between candidates. As such, the Harry Team began periodically increasing the votes of other candidates to boost lower places. The Zabëlle Team also caught on, and at points boosted the votes of Francis and Jack without their consent. Lord Jack was particularly salted by this move, as his 600 votes, albeit minuscule now compared to ever other candidate, was entirely achieved on his own.

By around 19:40, both the Harry and Zabëlle teams were competing to bring more bots online and beat each other in a war of attrition. However, as the hour looked as though it were coming to a close, suddenly a saviour appeared to the Harry Team, in the form of Lord Ben and his 16-thread CPU. The Harry Team were quickly well ahead, with around 3-5 election specialists running independent bots. The Emperor closed the vote at 20:00, after 2 hours and 10 minutes of voting. Conveniently, Harry had just hit 69% of the vote when this happened.

With Harry remaining as the incumbent Daily Memer, only time will tell whether the Daily Meme has received a new lease of life, or will remain drunk and broken in the gutter that is the Essexia discord.