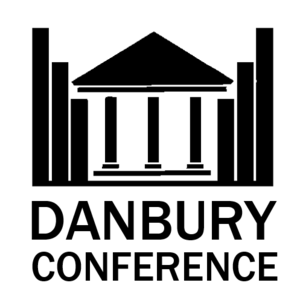 Logo of the Danbury Conference

The Danbury Conference was a series of meetings of senior government officials of the Commonwealth of Essexia, held across various Essexian dwellings in the village Danbury on the 17th and 18 June 2019. The purpose of the conference, called by the Minister of the Interior Lord Matthew, was to ensure complete clarity in regards to the functioning and future direction of the Essexian state, and thus, to rewrite the constitution and reform major processes within Essexia. Conference attendees included representatives from key government ministries, including the Minister of Foreign Affairs, the Justice, Interior and First Ministers, as well as Emperor Terry of Essexia. In the course of the meeting, Matthew and invited ministers outlined their intentions for his vision of a new Essexian Constitution and national structure, in which the Monarchy would be reformed and Essexia would become more authoritarian.

Minutes of the conference were written by Lord Matthew and are available for public viewing through request to the Interior Ministry, which has ensured that the processes of reforming the nation was mostly unanimous and thorough. The conference has come under some criticism from Members of Parliament, whom, were not included in the reform process, thus, felt the conference was somewhat unrepresentative.

The original Essexian constitution, established on the 7th of January 2019, was originally written by Lord Jacob and Lord Matthew as a means to formalise some form of structure to the nation, which had up until that date had no formal procedure or practice; it functioned purely off of custom and an informal Parliamentary structure which had surfaced after the November rebellions. The constitution was written fairly hastily, as around the time it was feared that another revolution could be imminent, therefore making the need for a constitution, that would safeguard the status quo, essential. The hasty construction of the January constitution led it to be somewhat unreliable, as it hadn't fully defined the practice of some essential functions such as the ministerial system or the judicial system. As well as this, it was frequently criticised for its ability to be exploited, such as the clause in Section II Article 5 that enabled both the First Minister and Emperor to issue national decrees, which led to the ultimate authority of either roles being debated. It was also noted around April by the Emperor himself that a loophole existed that would enable Parliament to get rid of the monarchy without the supposed unanimous vote that was supposed to be the only way to do so.

Citing the abundance of problems with the document, Lord Matthew announced that a new constitution should be drafted, with more people included in the writing process so as to minimise the risk unforeseen loopholes as well as create a system that was more respected by both major parties. The rewriting of the constitution was announced to occur over a three-day conference, named The Danbury Conference, which would occur at three different venues; Les Paddocks, Harwarden and the Danko House to represent the three main legislative departments of Essexia. On each of the three days, an agenda was announced. On day one, at Les Paddocks, there was to be military and Parliamentary reform. On day two, there was to be economic reform. On day three, the states would be redrawn and the constitution would be officially ratified. On all three days, after discussing and deciding on policy for the designated agenda, it was planned that the attendees would focus on rewriting the constitution.

Initially, there was some debate by the hosts as to whether or not the Emperor should attend, due to his supposed neutrality from matters regarding politics, however it was decided he would attend to monitor events. On the 10th of June 2019, Lord Jack announced to Parliament the plans for the conference and its intentions, and it was agreed that the agenda and conference should proceed. An act proposed by Lord Matthew also ensured the attendees would have the legal authority from the Parliament to change the constitution without having to be in permanent consultation with Parliament. The initial plan also included a part leisure day on the final day of the conference as a reward, however this was eventually scrapped.

Lord Matthew invited representatives from several government ministries, including the Foreign office, First Minister office, Defensive Ministry and Crown Court. By the time the invite list was announced, the details of the conference had already been constructed. Of the 8 chosen attendees, all but the Emperor were government ministers. 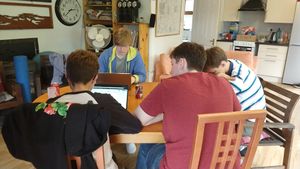 A few attendees reading through the newly written constitution for grammatical errors.

On the 17th June 2019, attendees arrived at Lord Jacks official residence around noon. Lord Matthew, Lord Jacob and the Emperor all arrived together, famously spotting Lord Finn and giving him a lift in the Emperors State Limousine to the gates of Les Paddocks as a symbol of friendship. The first matter the attendees discussed was the upcoming defence review. Lord Jacob went through his intentions for the restructuring of the military, and this was accepted by the attendees. Foreign Affairs was then discussed, and Lord Jack proposed issuing an official stance regarding the nations of Arkovia, Ikonia, Aspen and Gradonia; all of which it was agreed it would be the responsibility of the Foreign ministry to negotiate with regarding several projects. Attendees then split into groups; one focusing on the military, and the others focusing on the constitution. This was after deciding the Monarchy should be reformed into an Imperial system, in which Emperor Terry would become Emperor Terry, while retaining the same powers. The group writing the constitution debated many things in regards to how the nation would be restructured, including a new electoral system of proportional voting. The agenda of the day was completed far ahead of schedule, so much so, attendees moved onto the next days agenda. Due to the pace at which the agenda was being completed, it was decided that day three of the conference at the Danko House would be cancelled entirely, and proceedings would end on day two. Proceedings of day one ended at around 8pm, after around 7 or so hours of discussions. It was agreed Lord Matthew and Lord Jacob would be in charge of writing up the ideas debated during the first day into a full constitution overnight, to be reviewed on day two.

File:Danbury Conferance.jpg
Lord Jack, Emperor Terry and Lord Matthew enjoying the views of Harwarden on the second day of the conference

On the second day of the conference, Lord Jacob and Lord Ben announced they would not attend, citing other commitments. Regardless, the other 6 attendees reviewed the constitution that had been written overnight by Lord Matthew. Overall, the document was agreed as being substantially better than the then current version, bar a few clarifications that were added. After the constitution was finalised, the agenda of the day was talked through by Lord Finn, and completed within about 90 minutes. Attendees then took a walk through the grounds of Harwarden, said to be the most attractive place in Essexia. Emperor Terry commented on the natural beauty of the land, and there was said to be a sense of realisation and pride of the task bestowed upon the attendees. After this short break, Lord Matthew and Lord Jamie then wrote the Electoral and Judicial laws that were agreed upon on day one of the conference, before proceedings were officially ended around 7pm, having finished all scheduled activities. Overall, Lord Matthew announced to the Parliament that the conference had been a success.

As of present, the rewritten constitution and other acts devised over the conference have not been enacted by Parliament, and the military reforms remain somewhat incomplete. It is thought the new constitution will be motioned when the document is properly formatted by the Interior Ministry.