Battle of the King's Crown

From MicroWiki, the micronational encyclopædia
(Redirected from Battle of the Kings Crown)
Jump to navigation Jump to search

The Battle of the Kings Crown took place from 13:10 to 13:30 GMT on the 10th February 2019, and was the first major military defensive campaign for Essexia. The battle took place at the Emperor's place of education, The Sandon School, and was perpetrated by a hoard of younger students who attacked the Emperor and stole his crown. The Imperial Army of Essexia was imminently mobilised by General Jacob, and Lord Jack and Lord Chris issued a decree for conscription. Essexian soldiers and British sympathisers managed to push back the belligerents to Lower School Social Area, where they capitulated the crown. The attack by the British was intended to demoralise the Essexian population, however was a source of national pride for Essexia when then soldiers retook the crown and beat the British forces at the Run-In.

The Sandon School, located in Essex Chelmsford, is the primary place of education for Emperor Terry and the Crown Cabinet of Essexia, as well as some of the army of Essexia. Some afternoons, the Essexian delegation, and other British sympathisers march the Essexian flag around the playground, with the Emperor is in full regalia.

The Imperial Crown of Essexia is the Emperors Crown, and is the only piece of jewellery owned by the Emperor in his role of monarch. The crown was acquired by Lord Jack, presumably for a similar price to the Queen of the United Kingdom's many crowns. The crown has been of particular interest to most who watch the parade, and there have been other attempts to steal the Crown. The Crown is now kept in a separate bag when not in use, and is always in the possession of either the Emperor, or his personal bodyguard.

By Essexian law, the bearer of the Crown has right to the throne of Essexia, thus the importance of its safekeeping is of high priority in the Emperor's Dynasty.

The day before the battle, some of the Emperor's bodyguard noticed increased attention surrounding the Crown by onlookers of the parade, however, this threat was deemed negligible. 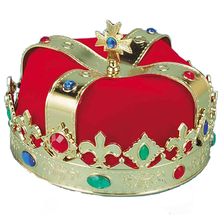 At 12:50pm, Lord Matthew had arranged another parade for the lunchtime, and the Essexian cabinet assembled by 13:00 on the main playground. First Minister Chris erected the Essexian flag onto the flagpole, which signals the start of a parade, and Emperor Terry removed his crown from its case, and the entourage began the procession.

At 13:10, as Emperor Terry was making his way through an archway, he was mobbed by 20-30 British troops. They surrounded him, leaving his personal bodyguard unable to break through. The Emperor was said to have resisted enormously and tried to push his way through the crowd, but was unable to succeed. British forces managed to capture the crown, and the item was handed to Commander Angela N of the British Thot Division. The British forces swarmed around her in a diamond foundation, and there were enormous cheers from other British onlookers. The Emperor fled the scene shortly after, and with Lord Jack and Lord Matthew escaped to a pre-designated safe room.

The remaining Essexian entourage began to chase the belligerents. Sergeant Mai-Ying of the 2nd Sino Division ordered her men to flank the British so as to startle them and provided enough of a distraction for General Jacob's counteroffensive. The division of 6 men managed to catch up with the British, who had been stopped by onlookers, however, they could penetrate the mob to retake the crown. The division made a tactical fallback to the Sports Hall, where they regrouped and reported back to the Generals.

General Jacob realised that the mob was becoming much bigger, and any Essexian attempts to recapture the crown would be impossible. The Emperor, now in the safe room, sent Lord Adam to gather British sympathisers to attack the mob. General Jacob adopted a doctrine of mass assault, and as such the Essexian propaganda machine was let loose. All in all, Lord Adam gathered an extra 14 students to rush at the mob. The plan however, of exactly how to attack the mob, was unclear.

Most of the Essexian High Command

An executive decision was issued by Emperor Terry who decided an attempt should be made to attack the mob. This was strongly opposed by Lord Jack and Lord Matt, who were accompanying the Emperor. If Essexian troops became encircled, the entire nation's armed forces would have to capitulate, leading to the collapse of the Commonwealth. They both saw this as a desperate attempt by the Emperor to retain his title, despite his pledge to put country before dynasty. Still however, General Jacob had devised a plan known as the "3 Minute Plan", due to the fact it was hastily devised within 3 minutes.

The plan involved the 1st Imperial Division and the 2nd Sino division creating a multi-pronged attack into the side of the mob, and the 1st Conscript Division would push their way into the centre to retake the crown. The plan was unpopular within the High Command, as it meant entrusting the objective of the mission to a group of highly unskilled conscripts who hadn't received training. The plan however, was signed off by Lord Ben and General Jacob, and was put into action within the minute.

The 2 flank divisions began to charge at the mob which resulted in a British retreat inside of the main school hall. It was here that many Essexian historians argue the turning point of the battle occurred. In an act of unprecedented alliance, the staff of the school began to detain the mob in the hall. They closed all the doors, locking a vast amount of the belligerent into the building. It was then realised the actual size of the mob was no more than 20. The staff ordered all the British troops stand down or they risked expulsion from the school for rowdy behaviour. There were said to be cheers from the Essexian troops, who appeared victorious.

However, Soldier Hinton of the 1st Imperial Division noticed that the main commanders and conspirators of the attack, Commander Maisie and Angela, had managed to run through the door before it had been blockaded. Realising the two were still in possession of the crown, and inside the school building, Emperor Terry left his safe room to find the duo, as he and his inner circle were the only ones inside the building.

The Emperor shortly came across the two. They were being disciplined by Major Sergeant Briggs of the British forces for breaking army rules and running in the corridor. Realizing their encirclement and impending loss, the attackers handed back the crown to Emperor Terry.

It was said following the battle, the Emperor placed the crown on his head and there were cheers and chants of his name from the regrouped Essexian army.

The crown was fully returned to Emperor Terry and the British forces disbanded. There was much rejoice in the Essexian Parliament, who declared the 10th February as a national holiday. General Jacob was awarded with the Trussler Cross for his intuition, and all conscripts were awarded with honorary Essexian citizenship for their bravery fighting for the nation.